I’m one month into the season and there is little reason to be unhappy. Four wins out of four and a Portuguese Super Cup is a solid return from the Benfica Boys.

But how exactly did it all play out? Here are my thoughts on month one.

Benfica is predicted to finish second in the league. We’re one of the few clubs in the Portuguese first division with serious moolah behind us, as well as access to players good enough to play in top sides across the continent.

Winning our first four games of the season should not be much of a surprise then. What was pleasing about the results can probably be seen when you examine them a bit more closely.

12 goals scored and one conceded is a promising start to the season. And, in general, that pleasing headline performance is backed up by strong performances within each of the matches.

And in terms of the transfer window, our three major signings were:

Defensively, we’ve been excellent throughout the run. Aside from Sporting’s set piece goal, the nearest we’ve come to conceding is a one on one in the Uniao De Madeira match which cannoned off the crossbar. The centre back pairing of Luisao and Lisandro Lopez is working well, Nicolas Tagliafico has settled well at left back to cover Nicolas Gaitan’s rampaging and Andreas Sammaris is proving an effective DM shield.

Top five performers from the first month of the season

Heading into the midfield and to the strikers, it’s a little bit trickier to get a handle on the performances. On the one hand, 12 goals is definitely a decent return and Raul Jimenez, despite his limitations, has bagged a quarter of those.

However, my concerns about my central striker have been vindicated by the way those goals have fallen. Despite controlling the game from start to finish, the two goals we scored against Sporting came against ten men in extra time; Boavista kept a clean sheet until half time against us in game one; Rio Ave were reasonably threatening until we scored a second late on in the match.

As in pre-season, our problems appeared to be caused by a failure to create decent chances regularly with Mitroglou and Jimenez. In the middle of the month, I therefore terminated Mitroglou’s loan and grabbed Jurgen Locadia from PSV to convert into a creative complete forward.

It’s too early to say exactly what impact he’s going to have, but the early signs are good. On his full league debut against Uniao De Madeira, he scored one and created another. And, in a twenty minute cameo against Rio Ave, he laid on the goal for Lucas Otavio to seal the win. So combining his guile with Raul Jimenez’s…simplicity means we have a range of useful striking options. 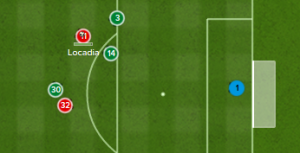 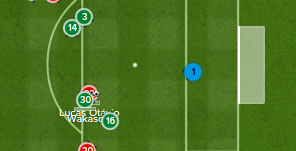 Strikers aside though, there have been a few things I’ve been pleased with on the attacking front. Lucas Otavio has been superb as a goal getting midfield. Averaging over 8.48 since he joined the club, he’s already scored twice in three league games – once from Locadia’s fine assist and another shot driven in from 25 yards.

As for the wingers, Nico Gaitan and Goncalo Guedes have excelled so far and been a constant pain for opposition defences. Meanwhile, another winger Pizzi has deputised ably as a playmaker in the absence of Talisca and Renato Sanches (both of whom were injured in the Sporting tie) meaning we haven’t felt their absence as much as we should have.

To conclude, everything is awesome. Well, it is at least for the month of August. September looks likely to bring a few more challenges for us to overcome.

The biggest of those is our Champion’s League group. Drawing Athletico Madrid, Wolfsburg and Shakhtar really isn’t ideal, especially when we were top seeds and we missed the likes of Molde, which means we’ll need to at our best to qualify.

And being at our best means cutting out every unnecessary weakness where possible. A small area of concern in the defence is right back. Nelson Semedo, while decent going forward, struggled a bit against Rio Ave’s wingers and allowed the runner through in the Uniao match. Changing him to a defence duty for the Champions League game, or perhaps replacing him totally, might be on the cards.

Finally, we’ll just have to deal with more games coming thick and fast. As we do that, it’s going to be important to vary ourselves tactically to avoid what has proven a useful strategic structure does not get found out too quickly.

To conclude then, a good start. But there’s always room for improvement.