Oh this has been a long time coming hasn’t it? I can only apologise for me constant promises at providing some worthwhile FM content for you to read, but never fear, it is here, I’ve not drunk beer so wipe those tear…s as I’m here to stay.

On a serious note George and I plan to provide regular content to our listeners from now on, that’s your commitment in writing right there. We’ve some great plans for the site and hope you’ll enjoy what’s to come. Right, to Lyon!

As we all know FM15 is drawing to the inevitable stage where it takes all of our motivation just to double click on its small red icon these days. FM16 is so near yet so far and so what to do to pass the time between now and the beta release? My answer came unexpectedly at the hands of an old friend; oh FM15, it took a long time but I finally found a save that I’ve really, really enjoyed. It was suggested I manage Lyon, this Olympiqued my interest and I’ve never looked back.

Ed Wilson takes the hot seat as the youngest manager in Ligue 1 to the vehement protest of die hard Lyon fans. Riots in the street, tear gas, petrol bombs marred my first press conference but I was steadfast and after a calm performance swatting aside questions about Mosquito & outlying my ambitious plans for the future, the fans were generally assuaged and my reign wasn’t the beginning, but it was a beginning.

I quite liked the look of Lyon’s squad, some great young players and a sound base to be working from with the obvious goal of toppling PSG as the best team in France albeit without the Qatar-i owners & endless pots of gold. To make the most of the players at my disposal I decided on a narrow 4-2-3-1 system with two DMs (DLP-S & BWM-D), three AMCs (SS, AP-S & AP-A) & Lacazette as the AF-A up top.

My start was generally positive which, as some of you will know, is key for me is sticking with a save being the fickle FM player that I am. A loss in the Champions Trophy on penalties to PSG was followed by 10 wins from the next 13 games in all competitions. A valiant 1-0 away loss at the Nou Camp was then followed by the highlight of the season; a 4-2 home win over a full strength Barcelona with Nabil Fekir starring in the SS role. This in turn sparked a run of 7 straight wins culminating is a fantastic 2-1 away win at those bastards PSG. January came, we were top of the league & things were looking Jordan Ferri good.

January was a busy time at Lyon, our recent good performances had not gone unnoticed & suitors with lining up for the in-from Lacazette. In truth he was grumbling about wanting to leave in November which, as I told him, is how to behave like an utter twatazette. So I had already lined up potential replacements; Vietto was brought in for a lovely low free & Lacazette flogged for some lovely money up front rising to £35m. He’d bagged 22 goals in 26 games so I did worry if Vietto did not hit the ground running that we’d lose momentum.

Little did I need to worry, Vietto bagged 8 in his first 7 with Carrasco starring in a supporting role at AMC, but it was not to last. Vietto bagged 4 away at Nantes who were understandably pissed at how he was running rings around them. Vietto was subsequently clotheslined and out for the rest of the season.

Step forward Claudio Beauvue; if I’m honest, I had no idea who this chap was, he sat on my bench and was solid when he came off it but I didn’t pay him much attention, yet he was thrust into the main strikers role and didn’t disappoint bagging 31 goals in 33 starts across the season and, alongside Fekir & Valbuena, hauled us to a title push that ultimately fell short.

1 win in 6 across the end of March/early April saw our struggle with PSG for Ligue 1 supremacy falter and eventually die a painful death, it was an admirable effort but we just couldn’t cope with the talent of PSG & even slipped a point behind OM to finish 3rd. We did finish the season on a high however by easing past Saint-Etienne in the French Cup Final 3-1 with goals from man-of-the-moment Beauvue, Gonalons & Valbuena. 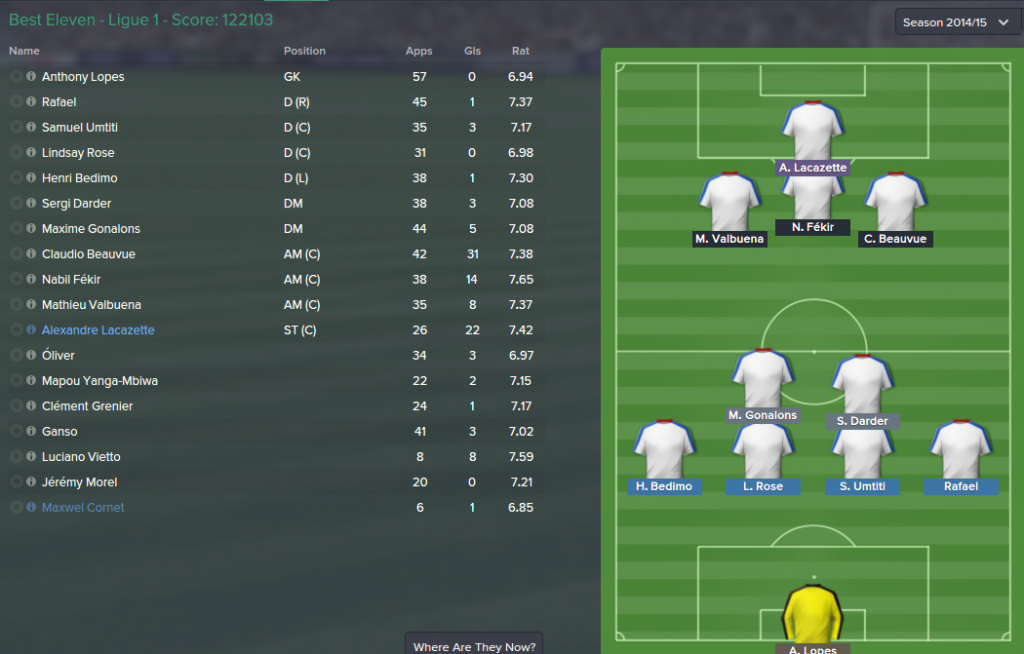 Overall a pretty solid first season, some great wins and performances all round with the unsung heroes being my two full backs (both on CWB-S) who galloped up and down their flanks like Mad Max on acid.

Summer 2015 will be time to build on our cup success and ensure we sustain that title challenge, though with a budget of just £11m I sense it will be a busy summer of ins and outs.