FM16 has been an utter bastard to me. As other FM’s have been in the past, most notably FM14 & FM15 (are you noticing a trend?) but by Joe Allen I still love trying to get to grips with a fragment of success through gritted teeth and smashed mugs of tea.

For those of you who’ve followed my woeful start to the FM16(beta) you’ll have seen I had planned a long term save with Padova; a potential fairy-tale story where I manage the team where my Father worked for much of my teenage life and where I used to join in local kickabouts with kids and did I worry about the language barrier? No, football is a universal language we can all play to.

Alas the fairy-tale became a nightmare and I was sacked after 13 games after winning only 2 of them, a measly attempt in the home town of Alessandro Del Piero & those local kids now laugh at me as I cross the street – I quickly sought pastures new.

I’m useless at decision making (not ideal for a football manager), so took advantage of a suggestion from @DMendoza1969 and plumped with Cukaricki in the Serbian SuperLeague (sorry if this is wrong but blame FM’s licenses), off the back of a record high 3rd place finish last season the pressure was on to keep the good times rolling at a club with minimal resources and only a 4,000 seater stadium. Step in Ed Wilson.

Serbia recently won the U20 World Cup and have a bunch of great youth players smattered around the teams in the top division, Cukaricki was no different and I’d be a fool not to look to build the club around these players and the other youth prospects coming through. Yet with recent success comes added exposure and alas I have been a victim of this. Larger clubs have made bids, unsettled my players, made more bids and in most cases forced my hand in selling on players I’d have loved to keep, bloody football ey?

Never fear! I’m confident I can reinvest the incoming funds on even more young Serbian talent and hopefully give Cukaricki the success their 4000 die-head season-ticket holders desire.

The early start of season seems to take forever, I’m refused from tinkering with my staff so I don’t even make them a cup of coffee before training. They swear at me in Serbian I swear…I set my training up as I want these kids to be worked hard and reach their undoubted potential…though I am trusting my staff and hoping they are lying to me about their star ratings.

As far as tactics go it’s pretty obvious I’ve struggled massively here and it’s my biggest weakness. I’m always torn between rigidly finding a tactic suited to the personnel & their desired roles, and forcing my squad into a system I ‘like’. So I decided to try and something much different; 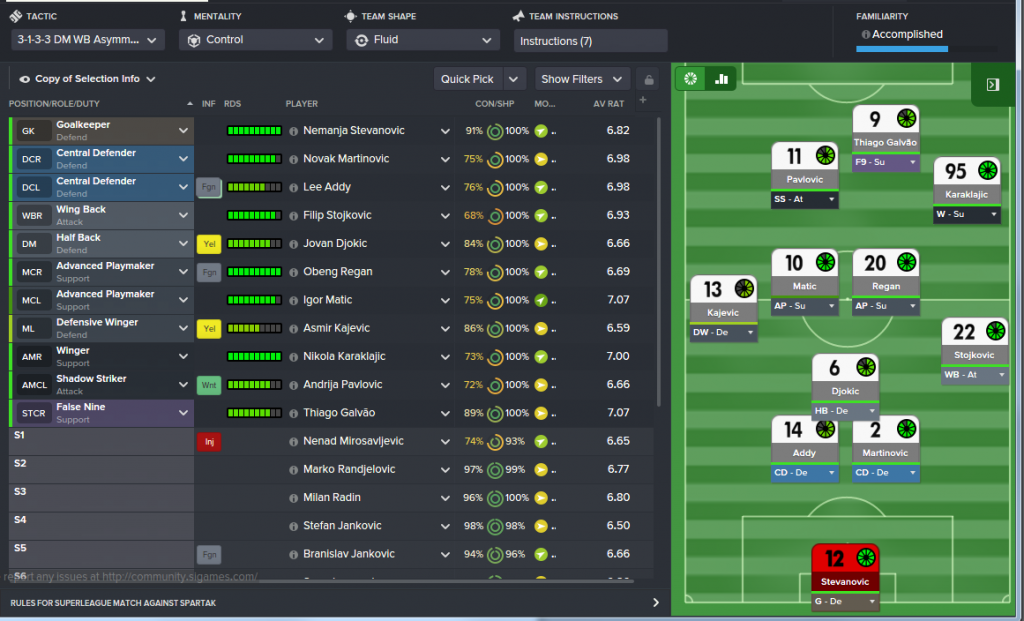 I’m still not sure what to make of this tactic – this isn’t what I started with but after watching matches and analysing a number of players this is what I have for now (5 games in to season + 4 Europa matches). I’m doing my best to observe how it plays and the key things I’m noticing so far are:
– Conceding too many shots
– Not creating enough key/CCC chances
– My better players aren’t excelling like I’d like them to

Now I’d genuinely love any input on how to improve this tactic, I do have some player instructions in place that I hope will help. I’ve only used this set up once and it harboured a 1-0 away win in a fairly even game so I’m hoping for progress. What I’m trying to do (with limited/varying success) is:

As I hinted it earlier it’s been fairly busy transfer-wise so far. I’m coming towards the end of the window and here’s business so far: 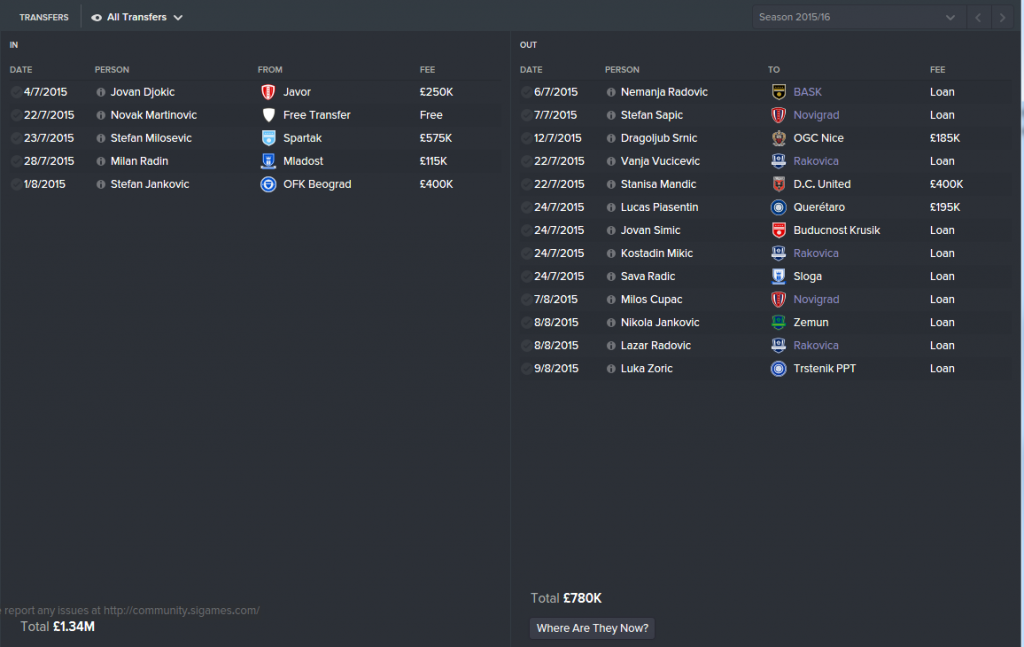 As you can see I’ve seemingly spent more than I’ve earned, yet I’ve some good future fee %, instalments and clauses on all sales and most of my incomings were in long term instalments and finances at the club are fine as things stand with a balance of £1.6m.

I’m particularly sore about losing Srnic & Mandic, I wanted to keep both and even offered to cycle them to training each day on my extended penny farthing but their heads were turned by contracts where they could afford a second-hand Ford Capri. I milked the fees as much as I could/dared and focussed on replacing them.

Mandic is replaced from within as I still have 2 or 3 players who can fill that role competently, again the replacements are young and full of vigour and verve and I’m disappointed an option to use such a phrase has yet to come up in a press conference.
I’m hoping to retrain Milosevic as a defensive winger to suit my current tactic – though he has great versatility across the left hand side should I look to tweak things in the future.

A couple of good wins vs Linfield got my hopes up for qualification yet we were just about undone by superior opposition in Slovan Bratislava, hey ho – the fitness of my squad was suffering hugely from the regular games so early in the season so I don’t see it as a major loss other than the financial rewards.

Partizan are bastards and definitely better than us and that showed when they comfortably beat us 2-0 in the Super Cup. Other than that, 2 wins, 2 draws 1 loss and sitting in 6th isn’t the worst start to the season especially as I’ve been tweaking nipples the tactic very regularly in and after each game. Let’s hope I can settle on one soon and the team can settle down and win some more football matches for god’s sake.

Now as we head into our first game at home with a ‘settled’ tactic i.e. one that I’m playing 2 games running – let’s see the outcome; 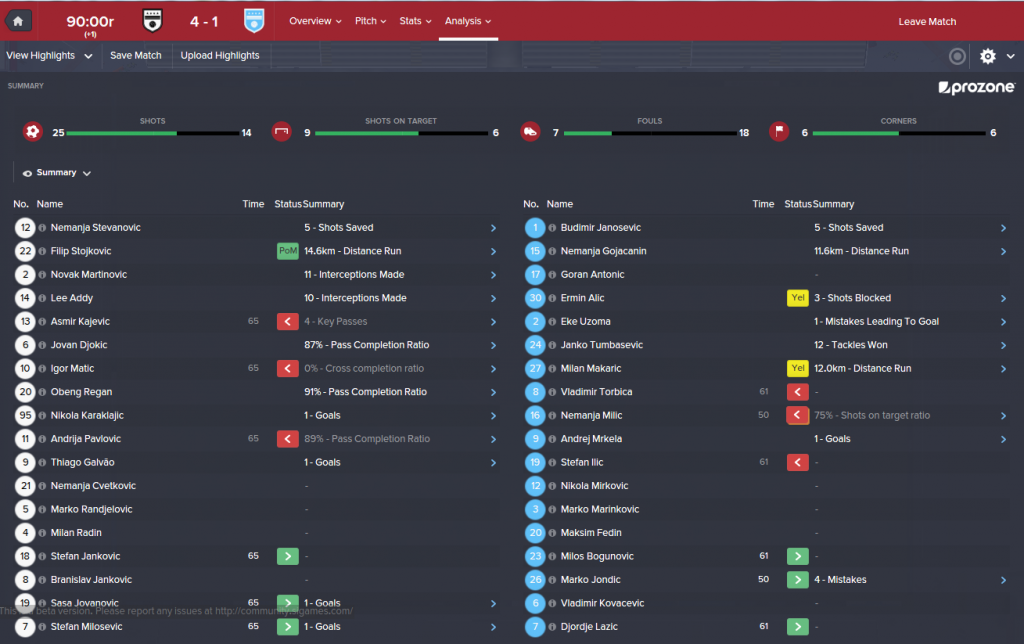 A great, comfortable, home win with some really promising play at times and some good signs that my team will look to utilise our right wing dominance. 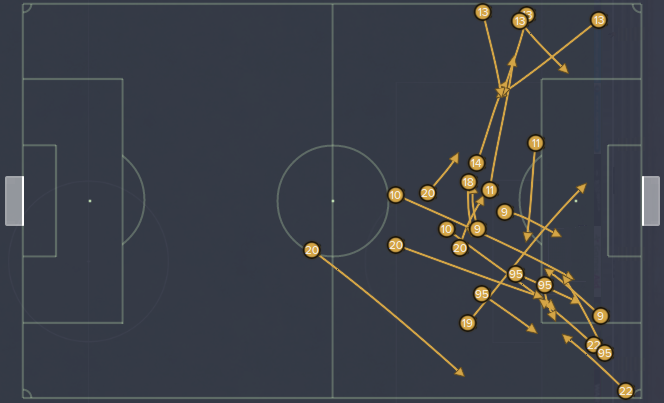 As you can see above we played 24 key passes this match and the majority coming from the right or from central area towards the right hand side. Our best player is Filip Stojkovic at WBR who clocked 3 assists this game as well as winning 6 tackles and making 7 interceptions. A scorchio performance.

I love ProZone, it’s bloody brilliant. A fantastic addition this year and I’m finding myself using it during and after each game, being able to do so has hopefully help my tweak things to the stage where I have a more settled team and tactic and one we can hopefully build on. We shall see, my current FM16 form would suggest it’ll be a bumpy road ahead but I promise I’ll try to enjoy it guys.

More for you soon.