“FM 2017 will be different.” – I told myself whilst in the midst of an in-depth VfL Bochum save on FM 2016. (Sorry my updates petered out. In short, I managed nearly three full seasons, the second two of which were spent barely staying in the 1. Bundesliga)

“Next edition I’ll do a proper journeyman save in Asia or South America.”, I thought.

“Something properly out of my comfort zone… Try some wacky formations too for good measure.”

Then – in the real world of football – after performing quite admirably for a team of their stature during the previous season and a half in the Conference National, my beloved Altrincham went on an awful run from January-April, winning two of seventeen games and looking more and more certain for the drop. With long-serving manager Lee Sinnott sacked mid-way through the horrid run in March, the turmoil continued and escalated. A 5-0 thrashing of already-relegated Welling United in their last home game ended up being of no consequence; a 3-0 loss away in their final outing at Braintree brought the curtain down on a season to forget. Alty would be playing in the Conference North again. 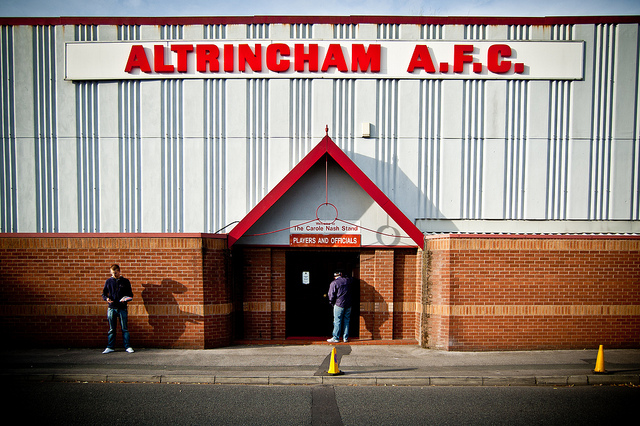 The feeling around Altrincham took a second nosedive in early May when a mass exodus of players was announced, several of them being first-teamers. One of them – Nicky Clee – was a certified local hero after playing seven full seasons at Moss Lane, almost unheard of at a level where 1-year contracts are the norm. In truth, it felt like things couldn’t get any worse.

As a counterpoint to the real world misery, something twigged in the FM part of my brain. But it was more the first crumbs of an idea, rather than a fully formed concept cake: “Could Altrincham ever reach the Football League? Will they even bounce back to the Conference National? Can they really compete with the richer, better facilitated teams in the area?”.

I would have to hold off a bit for a proper wave of FM-inspiration; it’d be a while until the concept cake could spark into life, rise from its tin and be perfectly presented in the hope of achieving a Hollywood handshake… 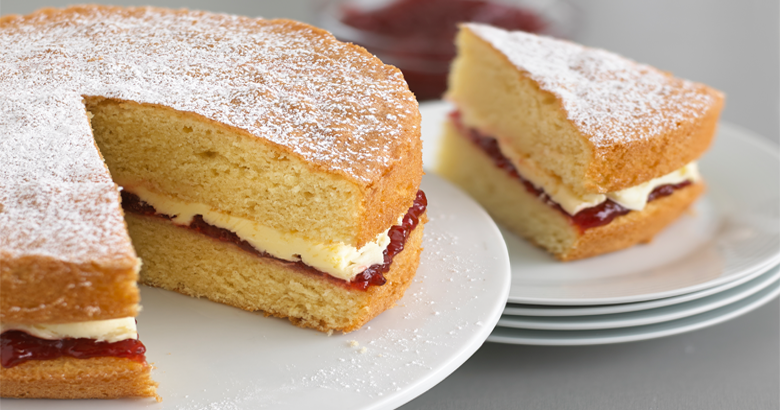 As the summer rolled on and seasoned veterans were replaced by a limited squad of locally based reserves from Southport, Chester and the Fylde Coast, the optimism remained low-key. The squad was padded out in a muted fashion with middle-ranking prospects from further down the football pyramid, but the alarm bells only truly started ringing when the football got under-way and a porous defence began shipping goals. Three 2-2 draws were followed by 6-0, 2-0 and 4-2 defeats and with the situation seemingly spiralling out of his control, the Altrincham board sacked manager Neil Young. What now then?

Well, being the FM fanatic that I am, I instantly flirted with the idea of managing them on the upcoming game, but I wasn’t fully sold on the idea until full release. By this time, Altrincham had plummeted to the foot of the table and the truth of the 2016/17 season was unbearable. Amidst the chaos, one of my favourite quotes sprang to mind:

“When you have to choose between the truth and the legend… print the legend.”

My concept cake had become fully formed. With no control over the increasingly desperate real-world affairs at Moss Lane, I will slip away into Football Manager and solve Alty’s myriad problems from the comfort of my desk – bringing comfort to an otherwise dismal season. I’ve well and truly found my inspiration for this year’s edition. You can sod your hipster journeyman globetrotter stuff, I’ll be going for a steamy cup of bovril and wet, windy nights at Moss Lane. 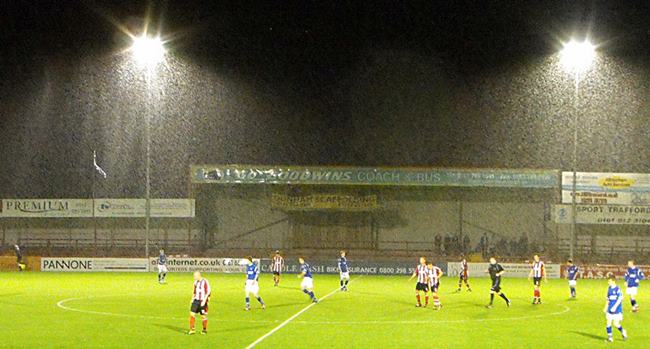