With the last article being heavy on squad detail and images, this time we’ll be looking at a part of playing FM that is renowned for its brevity… I’m joking of course, tactical discussions can be among the most meandering and silly discussions we have as fans of football, but it is an absolutely necessary part of the game and these can heed insight and even revelations.

Whether it’s an overarching philosophy or a basic game plan, nailing one’s tactical colours to the mast nice and early will make the management job a lot easier. Such is my belief anyway and I’m itching to make sure my counter-attacking 4-3-1-2 looks solid as we move through the early run of fixtures.

A NOD TO THE CLEON METHOD

Without resorting to the sort of fawning I reserve only for Damian Reeves, I’d like to give a quick nod to Cleon by acknowledging the fact that my creation of tactics has come on leaps and bounds since I adopted a few simple steps that he has talked about on many occasions.

– The first step is to let the tactic play out with NO CHANGES for the first three games (I actually left it for several more as it was working so well/tactic familiarity wasn’t full – but more on that soon).

– The second step is to use these three games to analyse your tactic in detail by watching the full game back and making notes; looking at key things like the players’ positioning in different phases of play and whether you can cover the weaknesses of your chosen formation.

– The final step is cautiously making adjustments that will solve any problems you have discovered in a logical way, applying them over the course of the next few games.

It seems simple but if you’re having trouble working out what’s going wrong, I’d highly recommend this method; I’ve followed it for the past few editions of FM and have come to swear by it as though it was routine. That’s not to say it’s the best way of finding out problems, but it definitely helps me understand the ins and outs of my tactic without getting caught up in the actual matches, or confused by statistics that can be misleading if the context isn’t understood.

IF IT AIN’T BROKE, STILL FIX IT

Enough rambling on anyway, time to take a look at how things are playing out on the pitches of the National League North – specifically, Moss Lane. Here’s a quick reminder of the tactic I’m using. 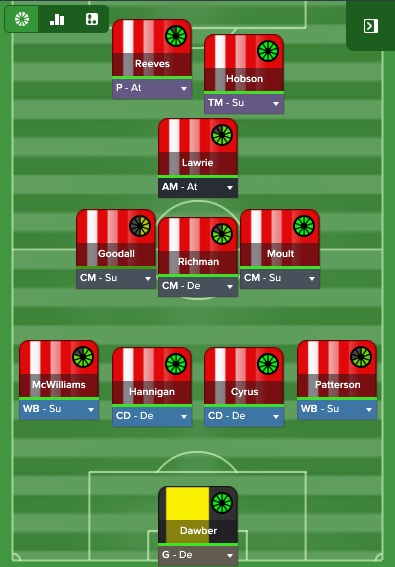 It’s hard to commit yourself to analysis when things are going swimmingly – and with what could only be the help of some sort of voodoo magic, Altrincham raced out of the traps like a greyhound, conceding only 1 goal in August whilst scoring 15. It really was a marvellous run and as confidence grew, I was very tempted to abandon any tactical assessment unless it became painfully obvious.

Something rankled though and in spite of the impressive defensive record, it felt like we rode our luck in some games, with some of our goals coming from speculative long shots and easy chances against defences that were yet to get their houses in order. Without these goals, some wins may have become draws and we would instead look like the average outfit we actually are; surely the answer lay in sorting out our attacking play? The following screenshot is taken from the second game of the season away at FC Halifax and although our tactical familiarity was relatively low, I saw enough to give me an insight into where the tactic could improve. 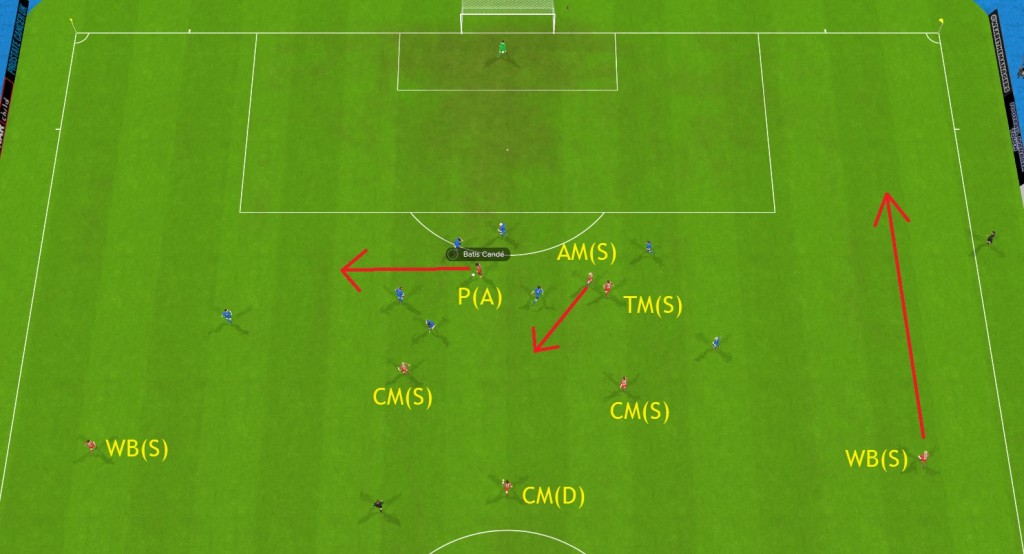 Batis Cande – the Poacher – is on the ball and is essentially crowded out. Dribbling to the left may help him here, but I’m tempted to think he should be positioned wider from the off as it will be difficult for him to find space consistently should he stay central.

As in pre-season, the attacking midfielder has overlapped the forwards and could do with exercising a little more caution – though his player trait of Gets Forward Wherever Possible is probably having an effect (not the end of the world, but something to keep an eye on).

Perhaps the most important aspect of this image though is our lack of width in the final third and I have thus signalled where I think the right back could advance to in order to stretch the opposition. 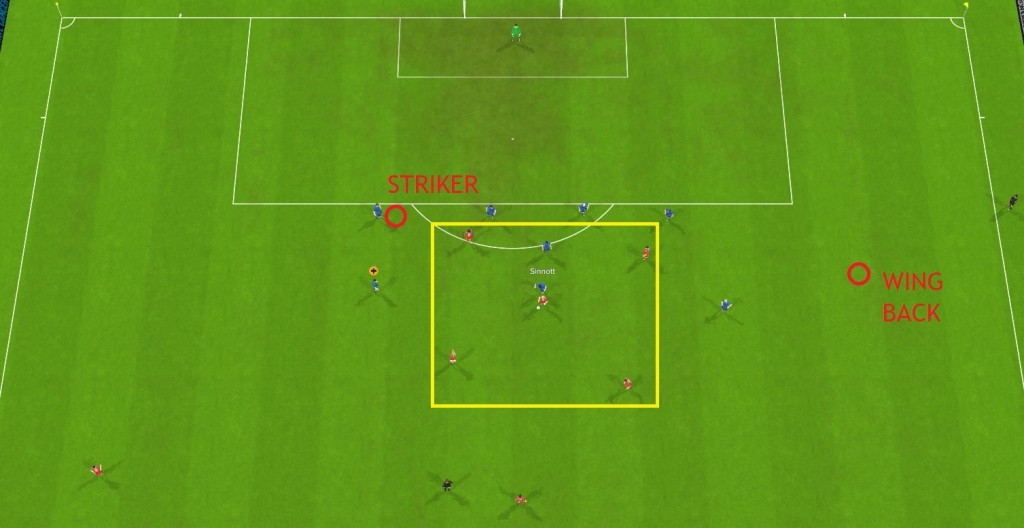 This second image is from the same game and confirms my suspicions. Although we line up with a narrow formation, it is definitely prudent to at least ask a few of my players to utilise wider areas should there be space to exploit. As we can see, all five players usually involved in chance-creation are stuck inside this tiny portion of the field represented by the yellow square.

Even with minor adjustments – such as an overlapping wing back, or one of the strikers pulling wide – our attack would look much better and we’d be giving the opposition something to deal with. The red circles indicate where I think players could be positioned in order to stretch the game, though long-term I may need to think about finding ways for the outside central midfielders to fan out a bit. 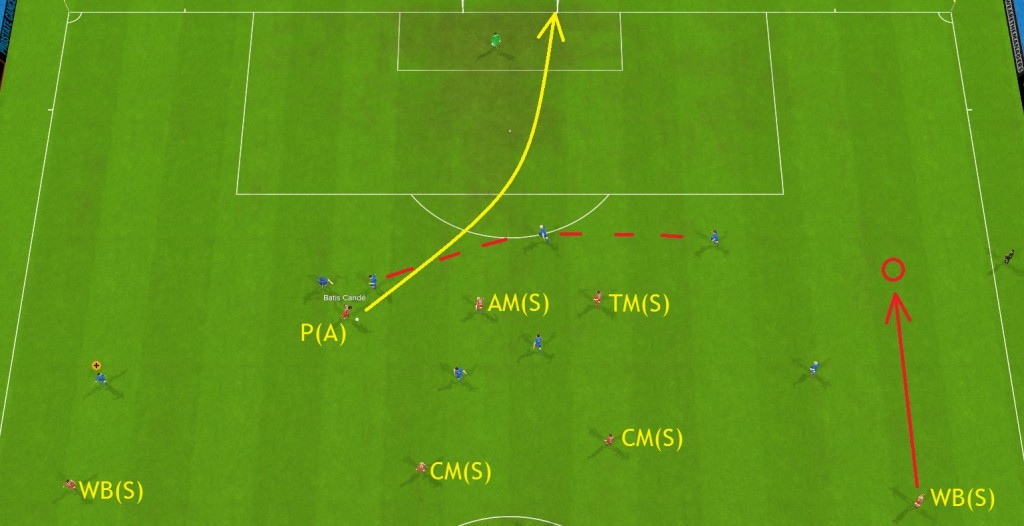 In this example we see the advantage of the striker picking up the ball in a wider area, as he drags a defender out of position, allowing my attacking midfielder and target man to put the back line under pressure (the dashed red line indicating the space which has opened up for tem to exploit).

Unfortunately, the poacher is too static and tries a speculative shot (which turns out to be a lovely goal), instead of playing it to one of his advancing teammates. On many other occasions, he stood still and chose an easy backwards pass or a long shot rather than a risky dribble or pass. Although it resulted in a cracking effort here, it cannot be regarded as a consistent way to create goals and a change is probably needed.

I have also marked once again where I believe the Wing Back should be positioned. We have a decent enough balance through the middle to support one of the wide defenders advancing and if he pushed on in this example, it would be essentially catastrophic for the opposition.

A CHANGE CAN DO YOU GOOD

After considering examples like the ones above from several games, it became obvious to me that two simple changes should be able to give me a lot more attacking balance and create more problems for the opposing team. I changed my Poacher to an Advanced Forward and my right-sided defender from a Wing Back on support duty to a Wing Back on attack duty. 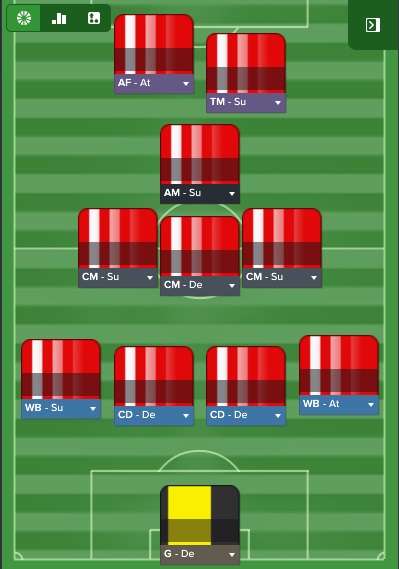 The fruits of these changes were visible straight away and – although the tactic isn’t perfect – we are creating more chances and scoring more goals so I count that as a success.

In this example, the usual three suspects have overloaded the centre of the box whilst the Wing Back overlaps and is released by some clever play from the right-sided Central Midfielder (who subsequently also carries on his run creating chaos on the right side). With all the space he could wish for, Ryan Smith is able to pick out a tempting cross into the danger area ahead of the 6-yard box and the ever-sharp Damian Reeves is on hand to angle a fine header to the far corner. This width has become a weapon as it combines with our natural overloading of the centre to create confusion in the heart of the defence and space for crosses and switches of play.

As for the adjustment of the Poacher to an Advanced Forward, these second two images highlight how it was necessary for him to also use width as a way of attacking the opposition.

In the first image (above), the Advanced Forward (Batis Cande) had picked up the ball in a wider position before dribbling inside and passing it on to the midfield (the ball is at the feet of Richman – CM(S)), who recycle it before noticing the Wing Back in acres of space on the right. Notice how Cande has taken up a position on the shoulder of the wide defender as opposed to centrally.

The Wing Back receives the ball in space and advances up the flank before connecting a first cross with the Target Man, who uses his strength to shield off three defenders and buy us time to get men forward. The Target Man then shifts the ball back to the Wing Back and by this point, the Advanced Forward – drifting into the box from a wider position – finds himself unmarked at the back post to be picked out by Patterson’s second cross for a simple finish. Lovely football. It’s great when you can see the roles working together in a cohesive way.

In both these examples (and many more that I don’t have time to show!), the two simple role changes have shown to improve our attacking game drastically. The Advanced Forward is less static than the Poacher, occasionally drifts wide (often into the channel) and is more inclined to dribble and play his part in the build up – as well as still providing the goal threat which I seek. The more attack-minded Wing Back is now stretching the opposition, creating space for our forwards and also providing a direct threat by putting crosses into the box (both Wing Backs have been slowly racking up assists since the changes).

Overall, I’m very pleased with how it’s playing out, though I’m sure more changes will be afoot. The two supporting central midfielders will probably be next on the agenda for a bit of tweaking; without deeper analysis, I’ve noticed that they can sometimes get bypassed and I’m thinking that it may be a good idea to allow one of them more freedom whilst reining in the other. That’s all yet to come though and for now, we march on in the hope of continuing this blistering form towards the halfway point of the season.

In the next article I’ll be updating on our form whilst taking a look at some new additions to the squad.