It’s the morning after the night before. I woke up today with a renewed vigour, like the veil had been lifted on my life and all was now clear before me.

I’d imagine that the majority of you reading this will by now have heard the news of what happened on that fateful night the 29th May 2032 at the San Siro. When two juggernauts collide there can only ever be one winner and lo’, how many times I have fallen at that final hurdle to be pummeled by those I despise and humiliated by condescending bastards. Yet no longer…

That night we rose from the ashes of Dybala’s retirement, eager to forge anew our own destiny, a supernatural being that blessed the hallowed turf on which it glided. Like a tsunami we washed over our enemies game by game with implacable force, multiple scores of goals, god-like performances and an incredible will to win. This team knew their time had come and no player nor Portuguese devil-child was going to stand in its way.

Before that fateful night in Milan let me summarise the season that defined our success. Long have we dominated the Bundesliga yet the 2031/32 season saw Red Bull Leipzig achieve stratospheric heights on the pitch. Pre-season saw me search the depths of my soul following a soul-destroying Champions League Semi-Final loss at PSG, a new system had to be forged the likes of which my FM world had never seen. 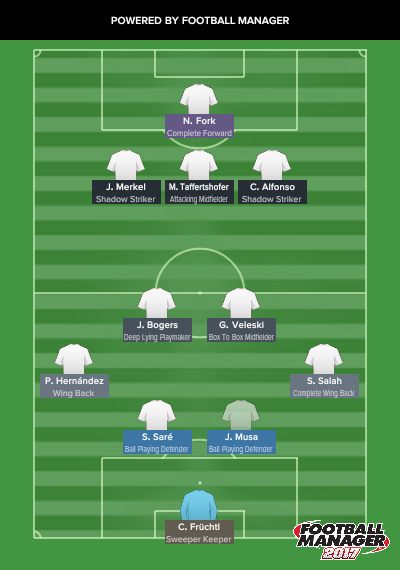 Nothing truly groundbreaking but ultimately taking advantage of the firepower we have in the AM/ST strata. There is also a huge bottomless abyss in which all the good RB/LBs have gone to I’ve used retrained wingers in the WB roles and I love them dearly. The big change came with a switch from Control/Very Fluid to Attacking/Structured, I wanted to pour forwards and score as many goals as we could. I was intrigued by what a structured system would offer us and I also used a number of TIs to add some creativity into our play. The resulting interplay between our front 4 was brilliant and never have I created so many chances. I like to think I’ll go into more analytic detail on this system in the next few weeks. 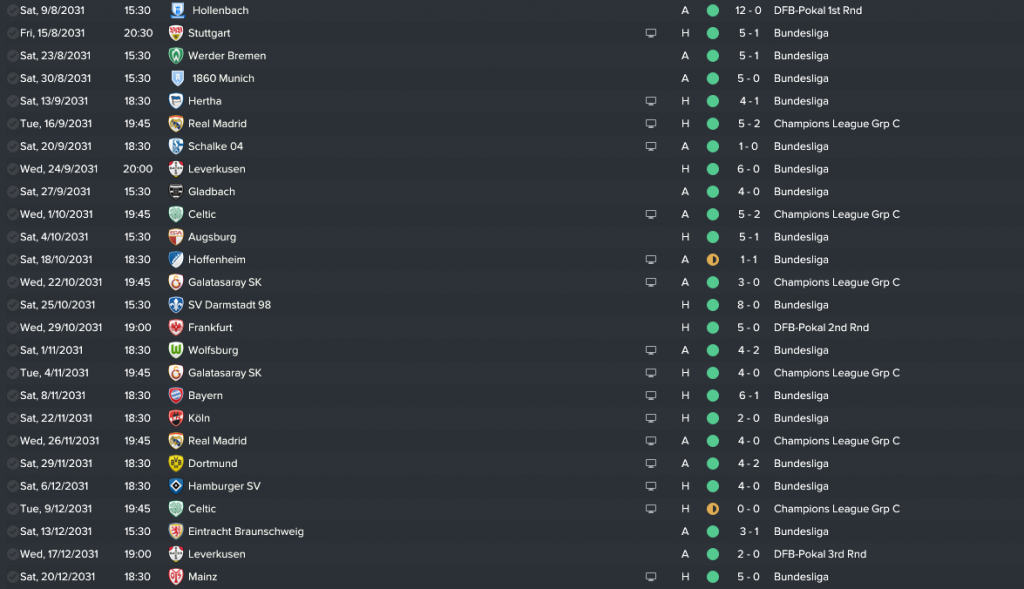 As you can see, we started the season in ominous fashion with a 12-0 drubbing of German minnows Hoffenbach in the DFB Pokal curtain raiser – Nico Fork, my new, one true love, Leipzig born and bred, youth team wonderkid – bagging 8 of the goals. 8!

As it turned out this was but a taste of things to come for my opponents as the first half of the season saw us only drop 2 points away at Hoffenheim and Celtic, winning every other match and nearly all by a huge margin. The 6-1 home win v Bayern a particular highlight. 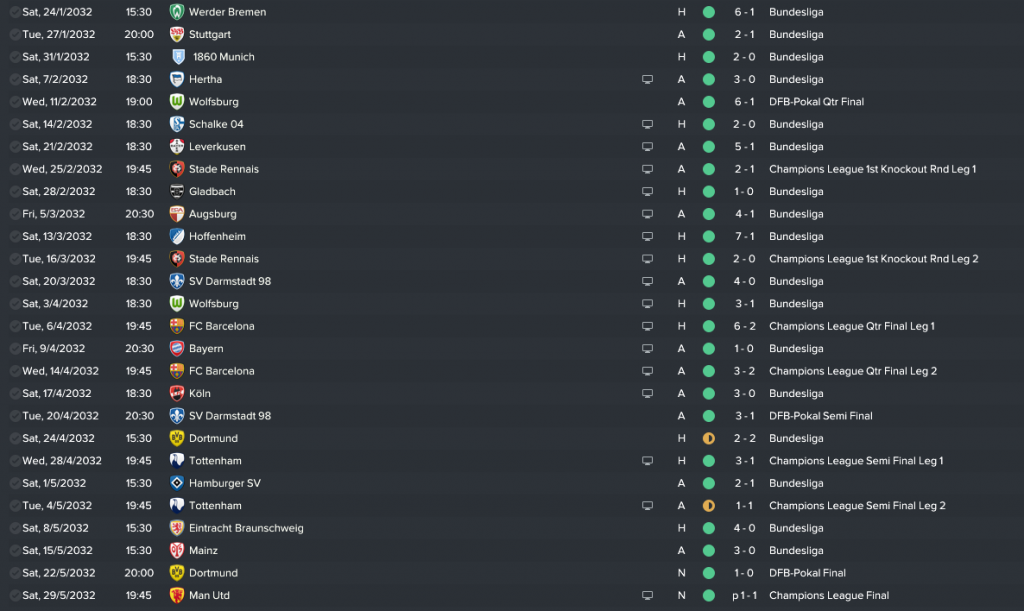 In previous seasons I had sometimes suffered from a ‘post winter slump’ but not this time. We were less efficient as the season wore in due to squad rotation & injuries however the goals and wins were in freeflow as again, we only dropped 2 more points in the league and failed to win only 2 more matches, winning all but 4 competitive games this season. We clinched our 6th consecutive title with a 1-0 win at Bayern but the 6-2 home drubbing of Barcelona particularly stands out for me; revenge for the Champions League final loss of 2 seasons back.

Here’s how the table finished:

126 goals scored in 34 games meaning we averaged 3.7 goals per game. This was a LOT of fun to witness though a little part of me does wish my rivals could pull their finger out and just be better than they currently are. Alas, I know that my managerial prowess in Germany is matched by no other nor indeed by any English manager as we top the respective Hall of Fames – the global one however is peaked by a certain arrogant Portugese twat.

We averaged 55.21% possession (4th highest) but were top of pass success ratio with 81%. We were awarded a mammoth 16 penalties! Scoring 13 of them (2nd placed Dortmund only were awarded 5…!). We won 66% of our headers (ranked 1st) and we’re currently on a 71 match unbeaten streak domestically scoring in our last 43 games in a row.
We completed 260 crosses (ranked 1st), and scored 15 goals from corners (ranked 1st). 341 shots on target meaning we’ve a slightly better ratio than 1:3 for goals scored per shot on target. We also didn’t concede a penalty all season.

I have noticed that our salary per annum is a staggering £183m compared to 2nd placed Dortmund’s £105m – this is a vast gap and so my dominance is to be expected and also highlights the fine line I walk with regards to FFP.

As with a lot of long term FM saves we all come to love our newgens like they were our own children as I’m no exception, I want to highlight the extraordinary feats my players went to this season and some of their cracking stats.

Above is a shot of my midfielders and strikers to show you how awesomely the goals were spread out. Having 2 players score 40+ goals is a first and probably unique achievement for me and I’m confident Nico Fork would have smashed the 50 goals mark had he not succumbed to a 3 month injury in October. As it was he averaged nearly a goal every half of football he played…! Not bad for a 20 year old.

One of the exciting things is how well my two strikers out on loan fared racking up 48 goals in 75 games between them. Sanogo will realistically be sold for a good fee as he’s now 23 and won’t ever be picked ahead of Alfonso, Fork, Prazak or Saad. Llop however is only 18 and so I hope to give him cup & rotation games next season to help boost his potential ever further.

There are so many players I could wax lyrical on but I’m going to focus on my 3 main men. Hats off to Goran Veleski (who Utd continue to unsettle), Samir Salah (what a man) Fruchtl (Champions League villain turned hero), Daniel Muntari (stepped up after Musa’s 8 month injury and was immense) and Julian Merkel (incredible 1st season with 21 goals and 15 assists). 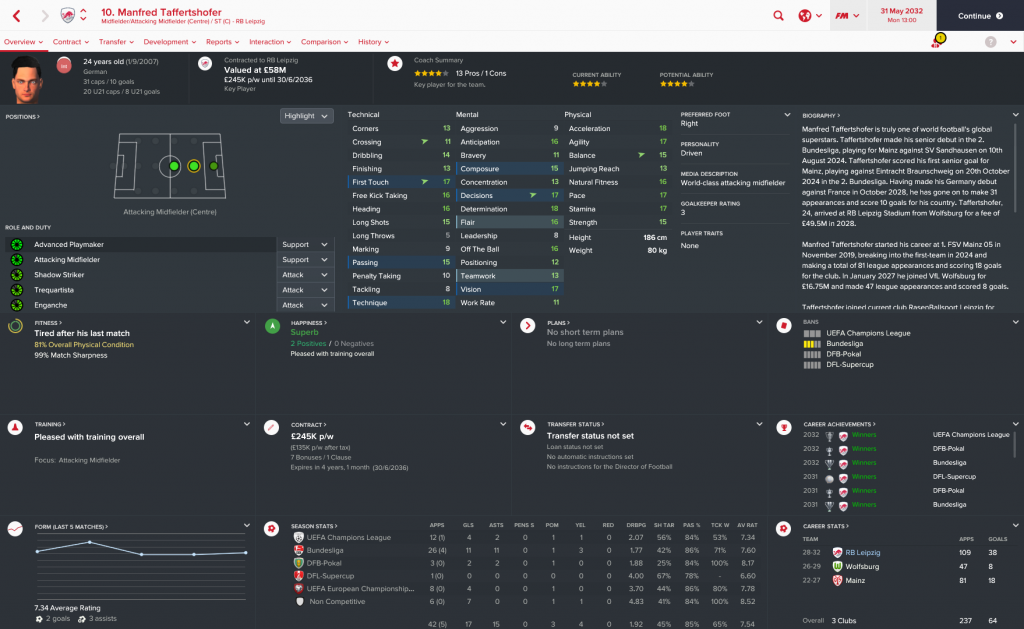 What a name, what a player. Manfred plays at AMC for me as an AM-S. He is pivotal is almost everything we do, he doesn’t score the most nor get the most assists but he’s always available and has scored some really, really important goals like away at Spurs, Barcelona and of course, the equaliser in the Champions League final and THAT penalty to crown us kings of the world. 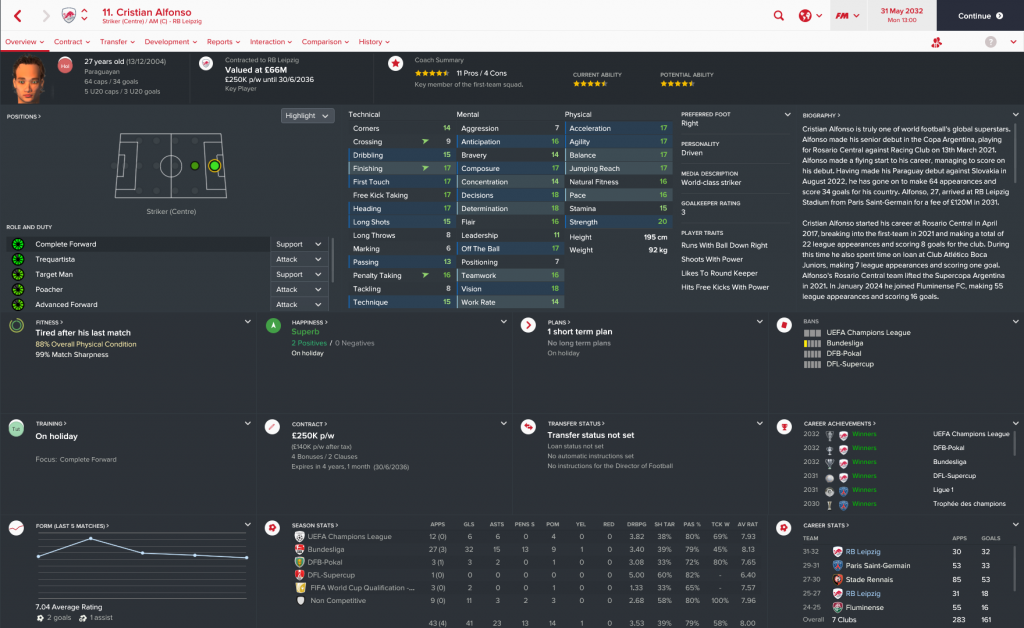 This guy…he’s had an interesting career and an interesting relationship with yours truly. Signed from Fluminese for £15m back in 2025 Alfonso was an obvious talent with the world at his feet. He was rotated in the squad as a teenager but his frustration at the lack of starting games proved a sticking point and ultimately saw him leave the club for his release clause when an emerging Stade Rennais came in, I couldn’t convince him to sign new terms and he left me disappointed.

He starred for Rennais and as they always do PSG swooped in after 2 seasons and bought the lad for £107m. He went on to score 33 in 53 games including a goal against me in last seasons Champions League semi final exit. He’d come back to bite the hand that fed him and so with Angloma & Antic sold for a combined £200m last summer, Alfonso was brought back home for £120m.

I used him predominantly as a Shadow Striker behind where he excelled – only playing as a striker when Nico Fork picked up a 3 month injury. Alfonso went out to break our leading assists record with 23 in 43 games whilst also scoring 41 goals and picking up 14 man of the match awards – he was helped by scoring 13 penalties but someone’s got to take them.

A beast at 195cm tall with 20 strength this is a player who cannot be fucked with. I’m very glad he’s back. 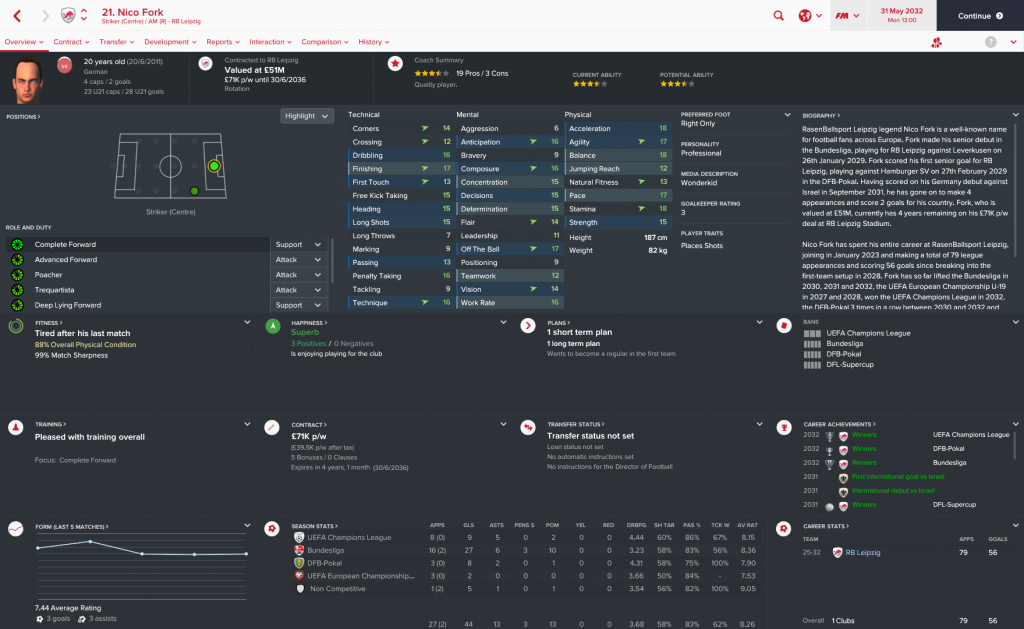 Ever since a first laid eyes on Nico I knew he was the one. I integrated him into the first team as soon as I could at the age of 17 and he meteoric rise has not stopped. Now 20, Nico has the world at his feet and even if he is limited by no more potential ablity – he’s already a stunner in my eyes.

Blighted by the 3 month injury that curtailed his goalscoring feats, Fork still went on to score 44 goals in 27 games picking up 13 assists and 13 man of the match awards. Quite simply, he was majestic in nearly every game he played. At 20 years old he’s one of the reasons why I want to continue this save as long as possible – just to write his history into legend for RBL and see how far he can take us with his prowess in front of goal.

This season has been fun, so much fun. The Champions League fairytale was written, the rivalry destined to meet. Wilson v Mourinho. Our road to Champions League glory has been long and arduous but it’s had a glorious ending, yet the true magic came on the journey.