Imagine the scene. You’ve witnessed a club at the peak of its power, dominating European football and winning the European Cup back-to-back. People would have told you it must’ve been a dream because only five years previous the club in question had been dwindling in the Second Division of its domestic footballing pyramid. This sounds like something that could only happen in Football Manager, right? Well in fact this is the story of one man’s achievements that will forever be the challenge myself and many Football Managers will try to replicate. The amazing triumphs of Mr. Brian Clough and his Nottingham Forest team of the 1970s and 80s.

This is where the story begins. Instead of being done by an energetic and sometimes erratic red-faced genius wearing an iconic green sweater, it’s in the hands of a 24-year old Glaswegian sitting behind the screen of an Acer laptop giving some instructions to eleven dots being simulated by a game processor. The rewards are not quite the same in terms of money or medals, but the reputation gained in the community of Football Manager players is of equal measure.

So here I am taking the hot seat at Nottingham Forest. I have always wanted to start a save at a lower league club but when it came to the start of a new game I have stuck with my usual journeyman game play. This time I have made It my ambition to take a great club back to the promise land that is the riches of the Premier League and develop a positive style of play along the way. I always like to do my research into a club before I start a save with them, just so you guys know how hard the task at hand will be, Forest haven’t been in the Premier League since 1999. The club has an illustrious history including two European cups and one Premier League trophy along with a European Super Cup, two FA cups and four league cups.

Before we get started into the hard work making the tactics and doing the training, I thought I’d share what my long and short-term plans are for the save. First of all we are looking to build a team that is capable of gaining promotion to the Premier League where it will be a mid-table team before we move on to the second part of the plan and push forward to the European qualifiers and even competing for the league. I started this save when the game was in Beta mode and haven’t even loaded up a game with another team, so any rookie mistakes you see in this save’s early stages can be excused slightly.

Getting into our save with Forest the first thing many people look at when they load up their games must be the transfer budget and it is with absolute horror that I can announce the board have given me a transfer budget of… FIVE HUNDRED THOUSAND POUNDS! (£500,000) and even worse a wage budget of £869 p/w. So, I don’t think Roman Abramovich and Chelsea have anything to lose sleep over quite yet.

Also, to refer to an earlier point of how difficult the save is going to be the bookies have given us odds of 1000-1 to gain promotion and odds of only 10-1 to get relegated to League One. So, I think it’s safe to say we may be up against it! 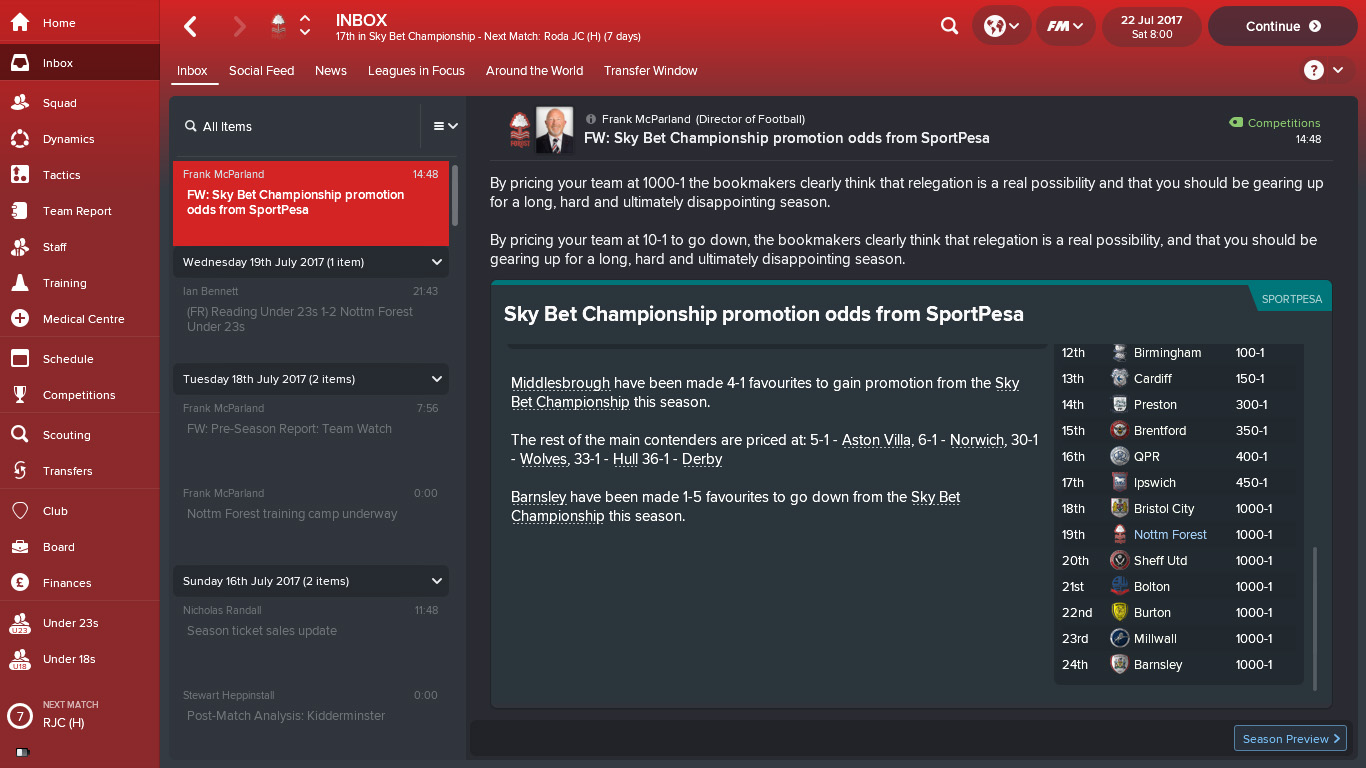 Our plans for the first season will be too assess the squad and lay the platforms for the seasons ahead, especially in this year’s football manager with the introduction of squad dynamics. With the budgets we have been given and the lack of value in a lot of the squad players we would like to sell and use the funds to bring in new players, I don’t feel like we would be able to bring in the type of player we want. So instead I will be trying to bulk the squad up with a few loan players and hopefully make some funds build up for future incomings.

As for any club trying to fight its way to the top it is important to plan and the full club has to be built from the bottom up. I’ve always been very passionate about a club being able to maintain a financial structure and go forward positively on the park and in the board room. So I will always be a looking for a bargain and looking for that diamond in the rough that could turn the club a nice profit to reinvest. Football in the modern era is all about money so you will see a reflection of this in my style of play.

Hope you all are looking forward to keeping up with my Football Manager stories and I will try post as often as I can and hopefully we can take Nottingham Forest back to the top again. It’s going to be a long road with plenty of problems but we will push through and get the glory the club deserves!

I’d like to say a special thanks to Samo, George and Ed for the opportunity to write on the site. All the years of Football Manager experience can hopefully help some of you guys out.

Thanks for reading, stay tuned