Picking a final save for Football Manager before the new iteration of the game comes out can be a very tricky affair, believe me the amount of saves I’ve started between May and September over the years is too large to contemplate.

For those of us who aren’t lucky enough to have a save where they take Harrow to the Champions League or turn the Slovakian League into the best in the world these few months can be tricky. You’re wary of starting a save that is too long term but also of one that is too easy and over too quickly.

This is the issue that I found myself facing when picking a save for the summer and after much soul searching I decided on Serie A side Empoli. I’m not sure if I’m alone in this but when I pick a club I like there to be something that stands out. Something quirky about the club or something that makes them an interesting project. 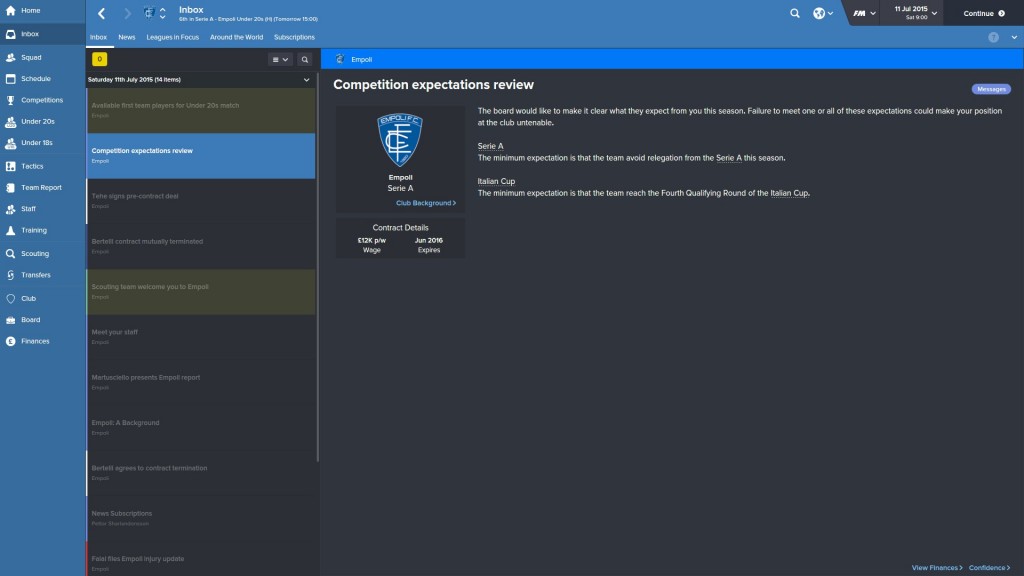 With Empoli the attraction was two-fold. Firstly they are based in Tuscany, an incredibly beautiful part of the world and within that region they are constantly overshadowed by Fiorentina. This sort of save is always attractive, where there is a bigger, more established club in the local vicinity and you have to try and topple them.

Secondly they are a club who tend to lose their best players every summer and have already lost one key player, as well as some of those who were at the club on loan. The Empoli squad is one that constantly refreshes year on year and this iteration feels too good to ignore, as there are some very good players there. The aims for this save are clear; become the biggest club in Tuscany, win a trophy, win the league and produce some good young players. There’s no time frame for this, let’s just have some fun and see where it goes!

Before we jump in I’m aware that some of you reading this will be in the same situation I found myself in so I’d like to share a few of the other clubs I considered as they may pique your interest!

Eibar – Wonderful story of a plucky little club massively punching above its weight. It’s really tricky to establish yourself in Spain but if you’re prepared for hard work and graft it could be perfect.

Hadjuk Split – One for those who like developing players for big sales, Split are constantly in the shadow of Dinamo Zagreb but they do have some really talented youngsters. Of course the long term is to succeed in Europe.

Carpi – A slightly smaller team than Empoli with a slightly weaker squad. They’re a great challenge and of course they have the wonderfully named Kevin Lasagne.

Partizan – Similar to Hadjuk in the sense that they are in a league typically dominated by just two or three teams. You’ll struggle to keep hold of FM favourite Andrija Zivkovic but the Partizan academy will keep churning out gems for you to use against rivals Red Star.

Lens – Lens have one of the best groups of players outside a top division in my opinion. There are a couple of players who could truly go on to become world class and with Lens you know you are getting quality, they’re the club who produced Raphael Varane amongst others.

Rayo Vallecano – Sadly relegated in real life Rayo have an incredible fan base and their former manager Paco Jemez was famous for always wanting to attack. A really fun little project and if you need inspiring, just watch this video!

In real life Tonelli has secured a transfer to Napoli and looking at his stats it’s easy to see why. Tonelli is tough and non-compromising, everything you would expect from a classic Italian defender. He’s great in the air and deceptively quick for a centre-back, he will be the leader of my defence and the real challenge is going to ensure we don’t lose him too quickly. 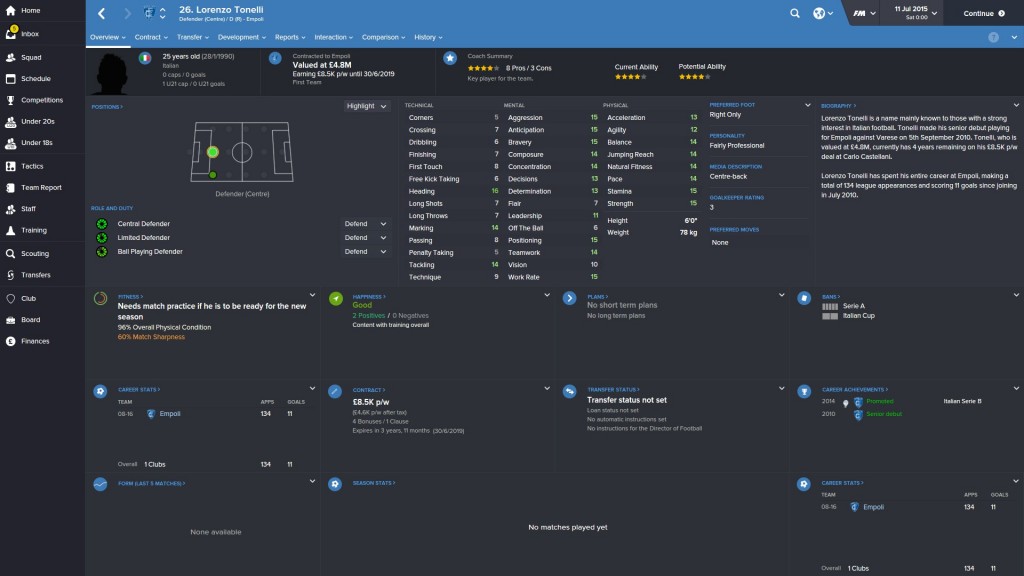 The star of the show, in the game he was only just signed permanently so we should have him for the first season at least. In the formations I’ve picked it’s all about getting the best out of Saponara with his creativity, he’s going to be the one who will unlock defences and fashion out chances. My worry at the moment is that he is already our highest earner with three years left on his deal, if we try to renegotiate we may just have to accept selling him, but that’ll be further down the line hopefully. 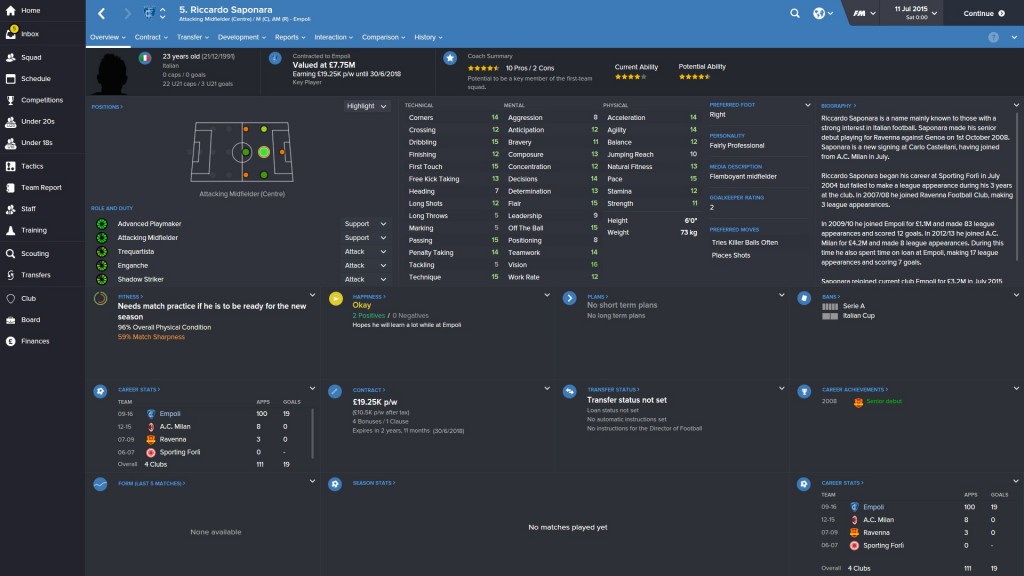 The man, the myth, the legend. The Big Mac is back at Empoli after a career that has seen him play for Middlesbrough, Parma, Siena, Palermo and Sampdoria. He remains one of the few players to be called up to the Italian national team whilst playing in Serie B and even though he’s in his mid 30s he will be the man leading the line. 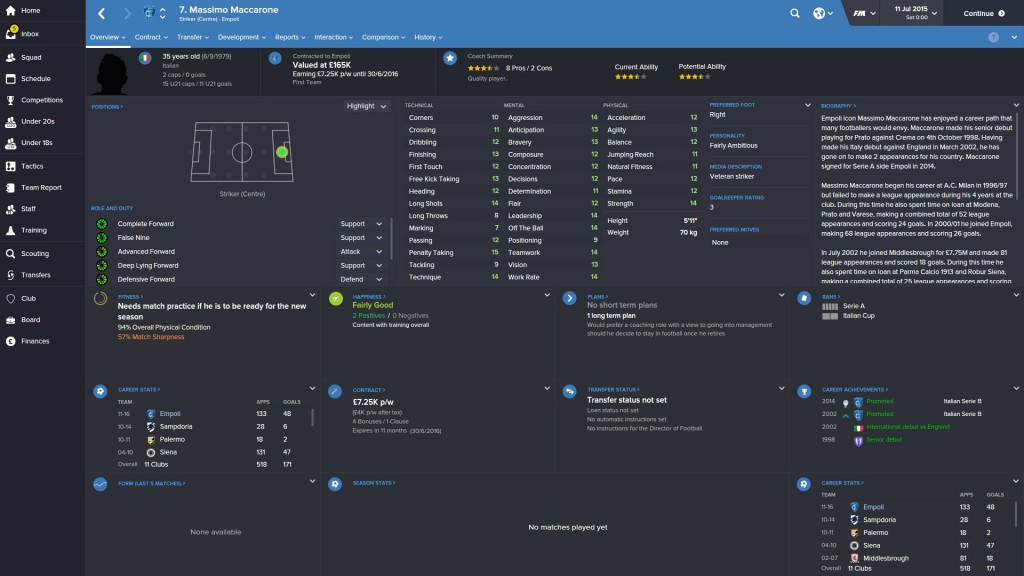 The jewel in Empoli crown. Diousse is only 17 but he’s already ready for the first team as far as I’m concerned, and I’ll be training him to make him a natural as a central midfielder as well as defensive. He’s been offered new contract so hopefully he accepts and that will make it easier to ward off interest, of which there already is plenty. 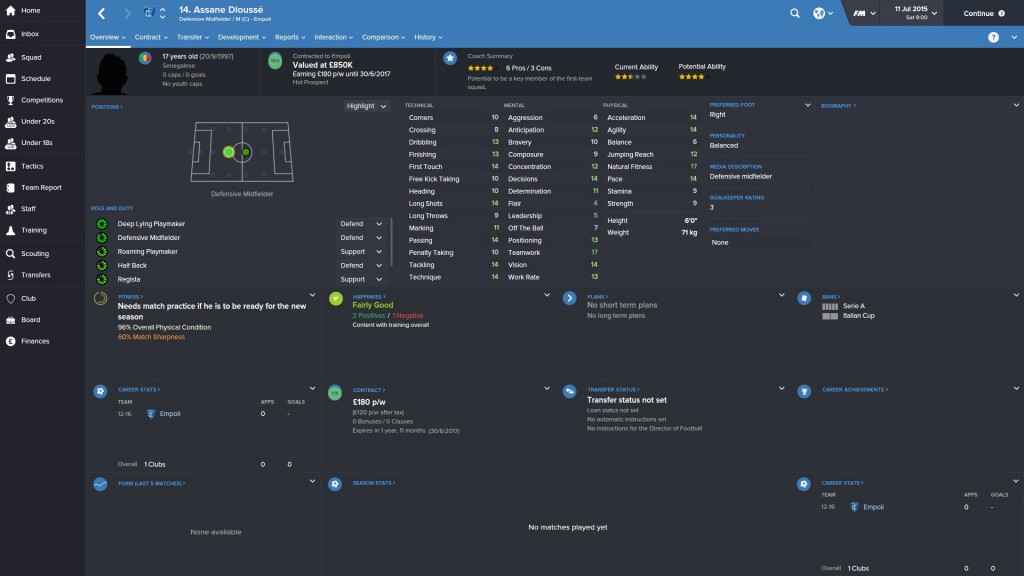 Originally my plan was to send Borghini out on loan but in pre-season one of my right-backs, Marco Zambelli picked up a three month injury. That means that Borghini will stay with the club as the back-up right-back and I’m hoping that eventually he can push to become the first choice. He has a nice range of stats, but that crossing figure of 4 is pretty alarming, hopefully we can get that up. 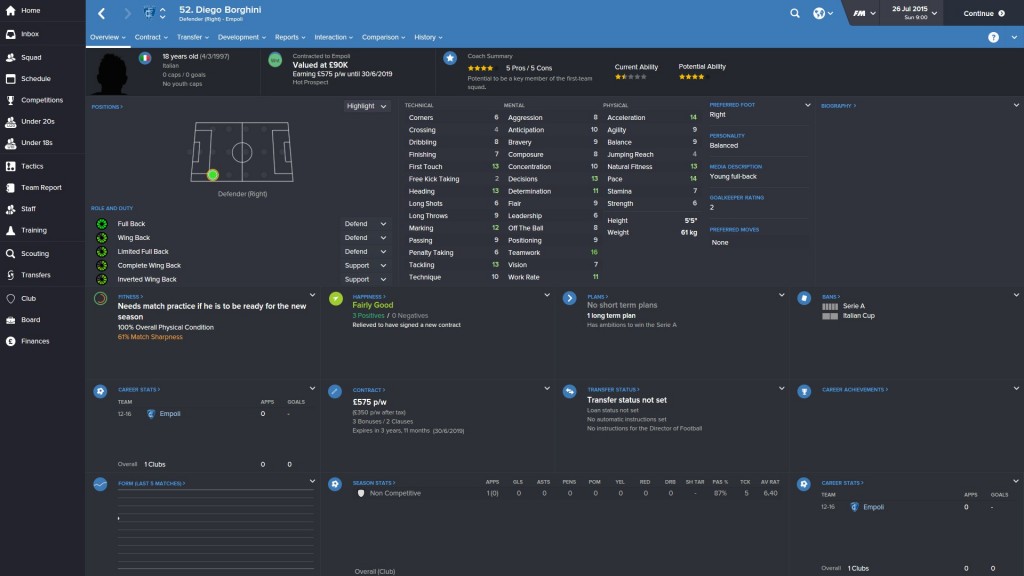 Originally I set my team up with this 3-5-2 formation (I know it’s not technically a 3-5-2 but it makes things easier!) built to try and absorb pressure to make use of the full-backs and as mentioned the skills of Saponara. The back three and Diousse will focus on keeping things tight and then get the ball to the wing-backs or our No.10 as quickly as possible. 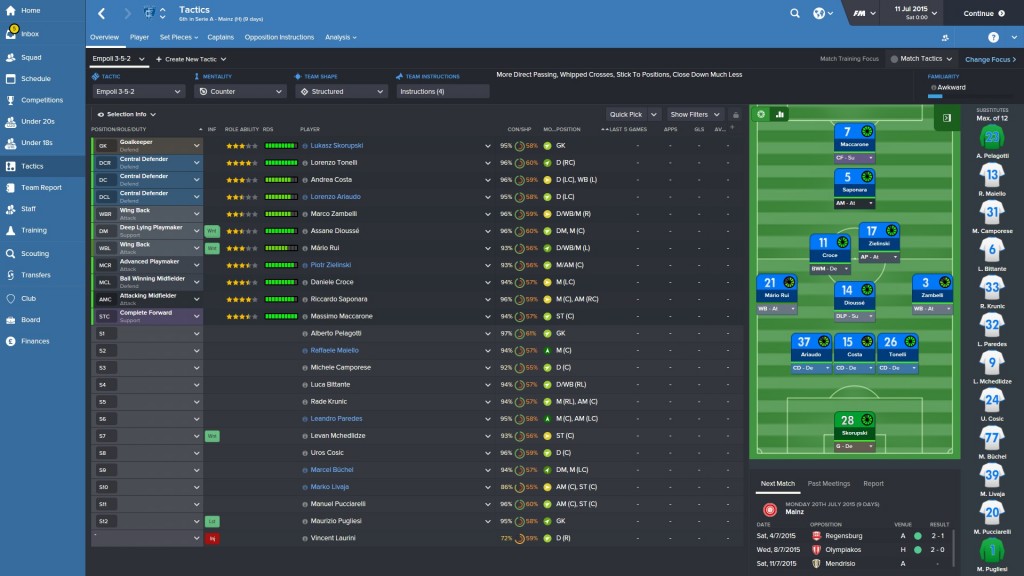 The thinking behind this is that we will spend a lot of our games defending and without real wingers this formation is the best way to get as much width as possible. I could have gone with two strikers but Saponara is key and I also wanted the defensive midfielder for added cover.

However the vast majority of the pre-season fixtures were against teams poorer than us so I decided to build a more offensive formation. The three attacking midfielders behind Maccarone are given the freedom to move around how they want with the two players behind them sitting deeper to protect the defence. 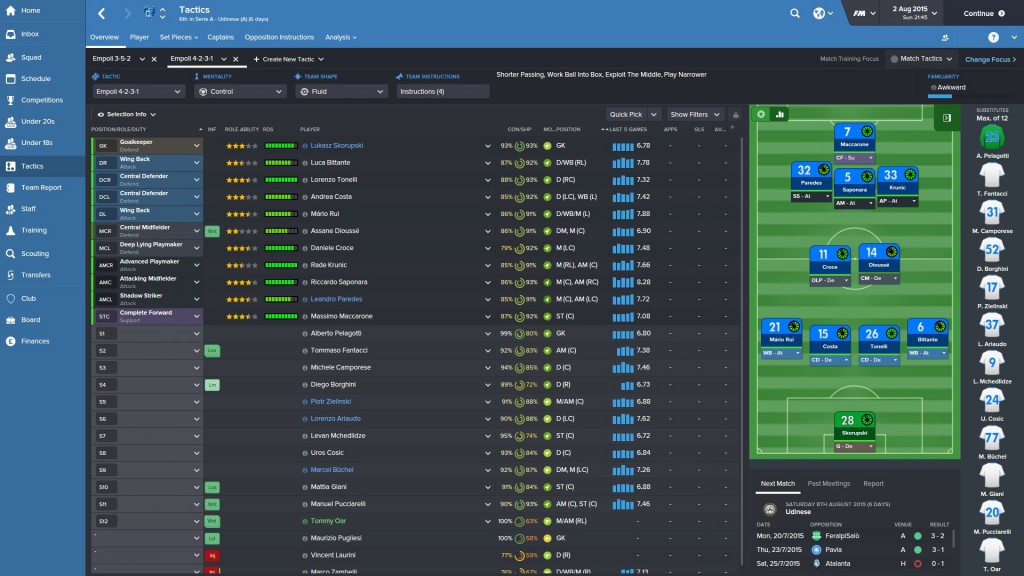 This formation will be used when we play smaller teams and of course as we develop into a better team we can use it more. In pre-season as you can see from the results below it was highly impressive. The team were pretty dominant and they created a load of chances. Of course by the same degree we were mostly playing lower league teams but regardless I’m pretty happy with how it went. 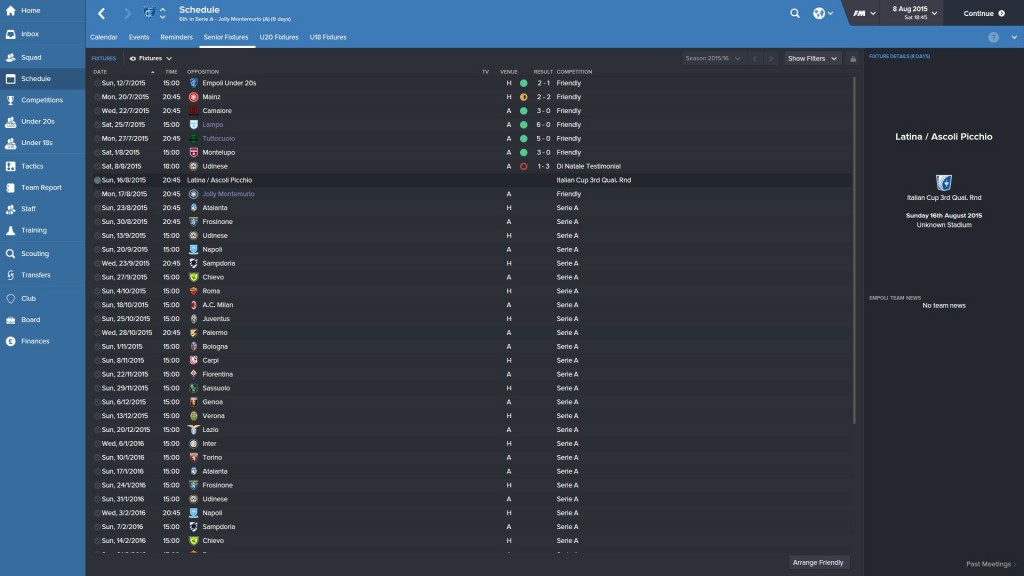 If there’s anything you would like to see or for me to explain in my next post then please do let me know either in the comments or on Twitter.

In the next post we’ll be rounding up the first few months of the season, hope to see you then!