So the first few games of the season were tough. We got off to the best possible start with an easy 2-0 win over Atalanta in the first game of the season. This was using the 4-2-3-1 formation because we were at home against a team I deem to be relatively similar to us.

Annoyingly this left me in quite a difficult situation because our next game was against Frosinone, a newly promoted side. My initial instinct was to go with this formation again because even though we were away from home we were so good in the first game it made sense to stick with it. In the end my head won out and we went back to the three at the back formation and my plan was to keep things tight and maybe nick a win. This was working splendidly with the score at 1-1 right up until the 92nd and 94th minutes of the game, when my team decided to implode and give away two cheap goals. For the next game against Udinese we went back to the 4-2-3-1 and although we went down 2-0 we actually played pretty well. Antonio Di Natale (volley) and Francesco Lodi (free-kick) produced two moments of magic and we were just unlucky with not taking our chances. The big news out of this game though was Saponara picking up an eight week injury, the Oxford dictionary definition of a disaster. 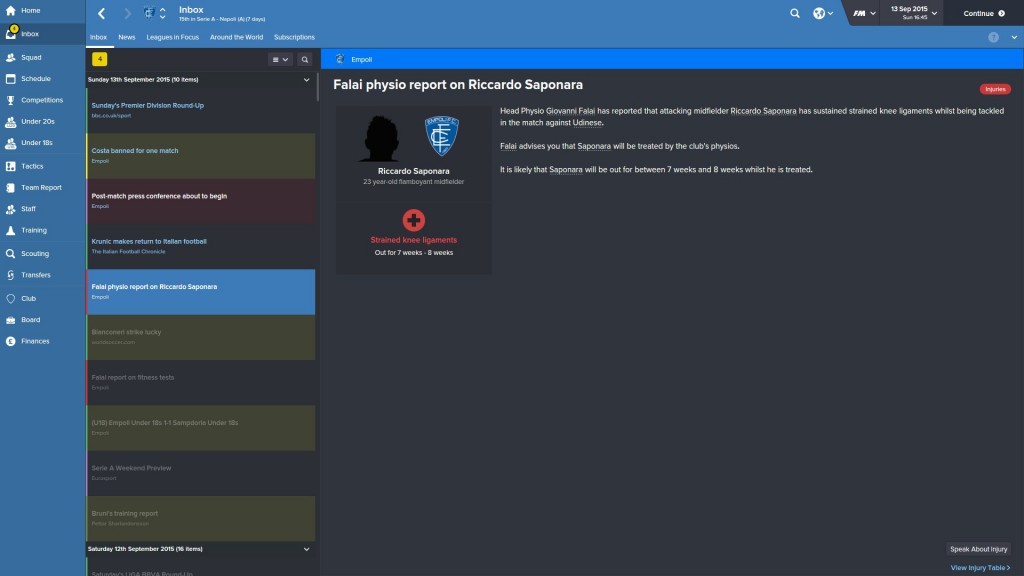 Little did I know at the time that this would be the start of my most difficult run in Football Manager 2016, and one of the trickiest in the past couple of editions. Including the results against Frosinone and Udinese we lost eight games in all. Now admittedly some of these games were against the likes of Napoli, Roma, Milan and Juventus but even still there are some very frustrating results in this run.

In fact against Napoli and Roma we only lost by a single goal and although we were dominated in both games we defended well and we would have got the draw had we not had one momentary lapse of concentration.

The Chievo and Sampdoria results were more annoying because as you can see we had more shots in both but we just couldn’t put away our chances, which personally I felt were better than our opponents. We also missed a penalty against the former just minutes after we had gone behind, a recurring problem as we missed one against Milan when the score was still 0-0, before going on to lost 3-0. 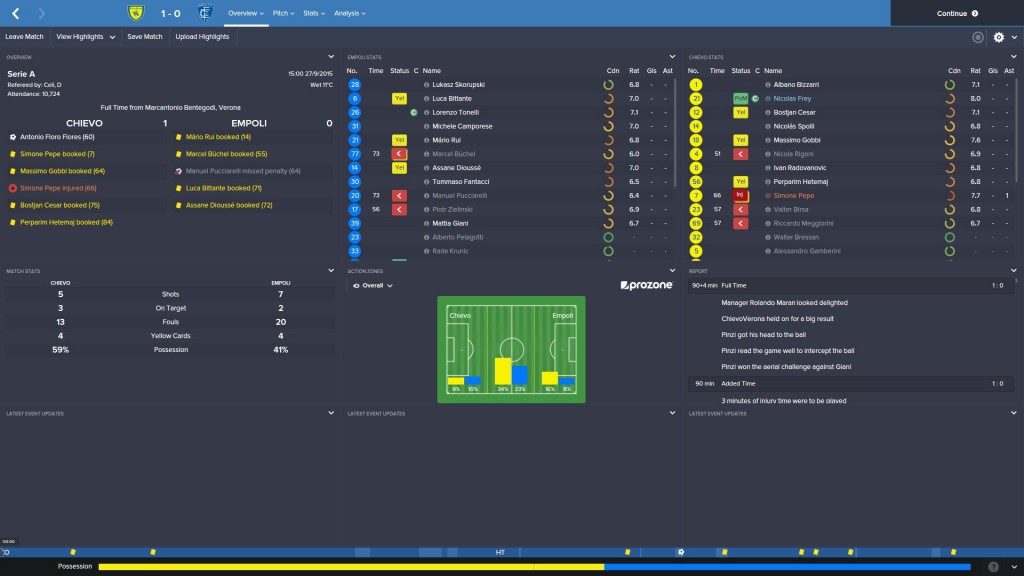 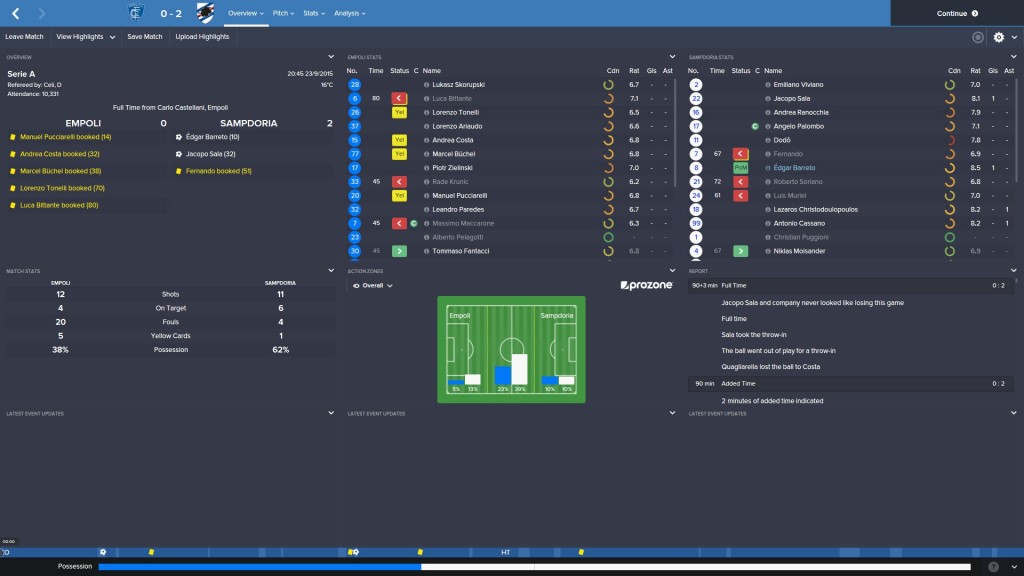 What perhaps made this more difficult is this wasn’t a team where we I necessarily expected to struggle. When you’re taking a Conference North/South side up the divisions there are going to be tough periods, that is only to be expected, on paper Empoli don’t have that bad a side. I didn’t have any real aims for this season as I wasn’t entirely sure of what the squad would be capable of, particularly with the option for no transfer budget ticked to ensure a greater sense of reality, but I still felt that we wouldn’t be this far into relegation problems.

During this run I moved the 4-2-3-1 around a bit so the central midfielders dropped into defensive midfield, which in theory would allow greater defensive protection. I also regularly swapped between this formation and the three at the back, although looking back I realise I might have been better served actually sticking to one and allowing my players to settle. I certainly suffered a knee-jerk reaction to Saponara’s injury, deciding to go with just one AM or even none, choosing at times to play with two STs. 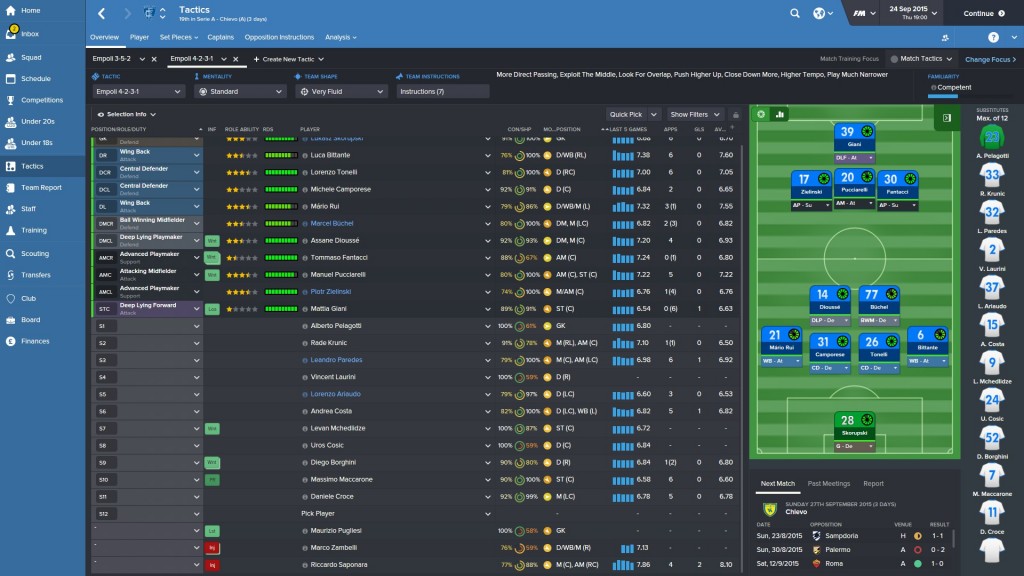 In this run I could already see where we could get out of it, and the Palermo game first up was crucial. We didn’t play particularly well or deserve to win, but we more importantly WE DID WIN and Maccarone finally got on the score sheet with a tidy finish inside the area. In other games my focus had been to try and keep things tight at the back, and catch teams on the counter but against Palermo I felt I had to do something a little bit different. I reduced the number of instructions and told the team to be more bold in their approach, giving them my trust. It was a risk but my message to the team (in theory at least) was that if we’re going down we’re going down fighting, and it clearly worked. 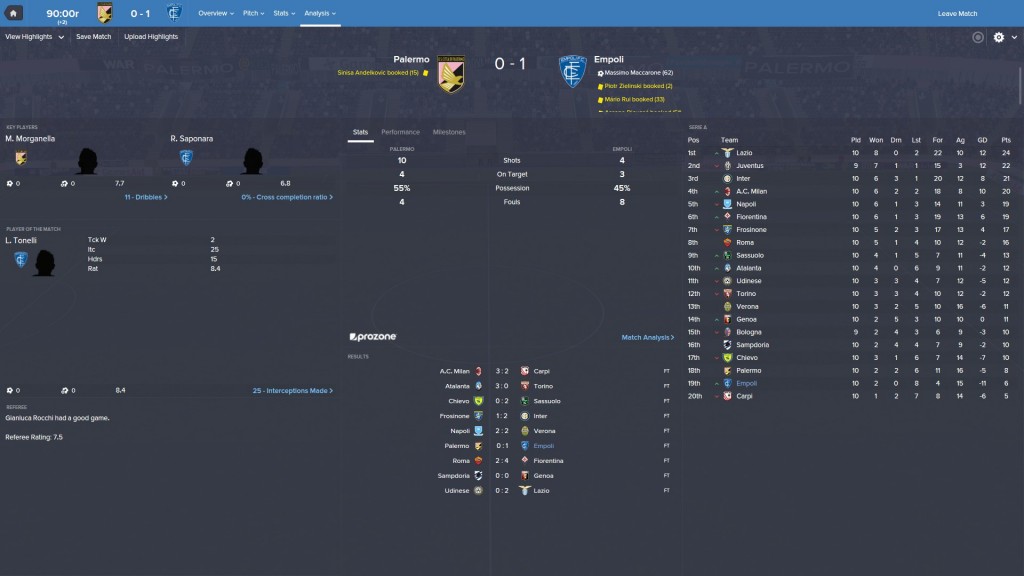 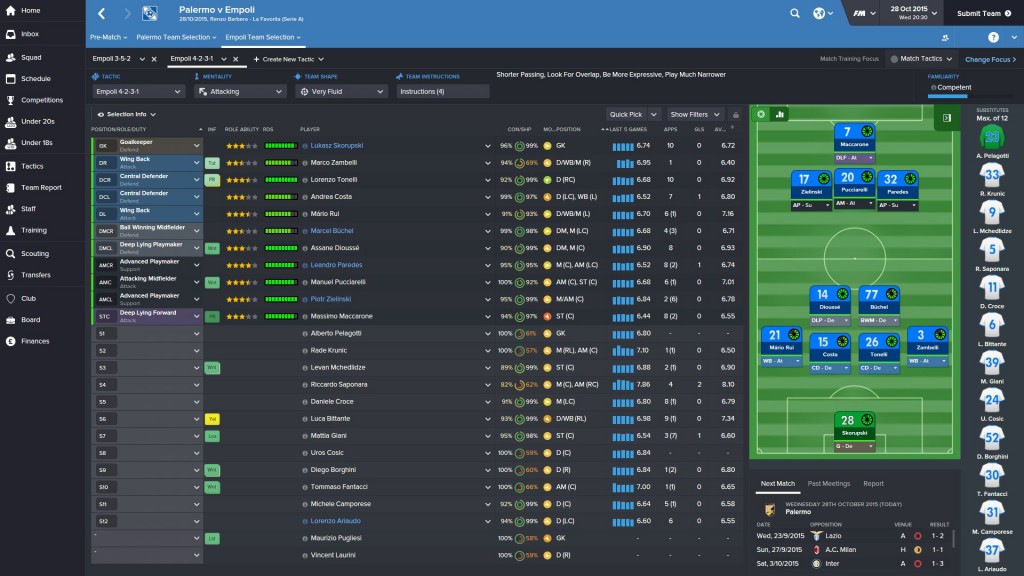 Bologna came just a few days after the Palermo victory and despite a few tired legs the only change I made saw youngster Tommaso Fantacci come in for Piotr Zielinski, who has been very disappointing so far. Bologna boasted Euro 2016 hero Emanuele Giaccherini and the dangerous Mattia Destro but we defended really well yet again and it finished 0-0. In the end they had a man sent off and we could have snatched it late on but back to back clean sheets is a first for the season so we have to be happy with that.

Next up was a huge game, the only team in the division lower than us, Carpi. This was the game that saw Saponara finally return to the starting XI, after six games out. The first half an hour we just didn’t get going, we couldn’t string a pass together and we were making Carpi look like Barcelona. Things went from bad to worse when Mario Rui was booked and then Lorenzo Tonelli gave away a penalty from the resulting free-kick.

Thankfully Jonathan De Guzman’s penalty was well saved, which actually brings me onto a separate point, has anyone else noticed how many penalties are missed in this year’s edition? It might just be me but it feels like there is a lot of failed spot-kicks. Anyway De Guzman’s miss proved costly when Rui broke through and scored his first goal of the season.

Weirdly there were probably about seven shots in the game overall and I don’t think that either keeper had to make a save in the second-half. Nevertheless it was a second win in three and a third clean sheet. We’re not out of the woods but at this stage we’re a win away from getting out of the relegation zone, whilst Carpi are five points adrift from us. 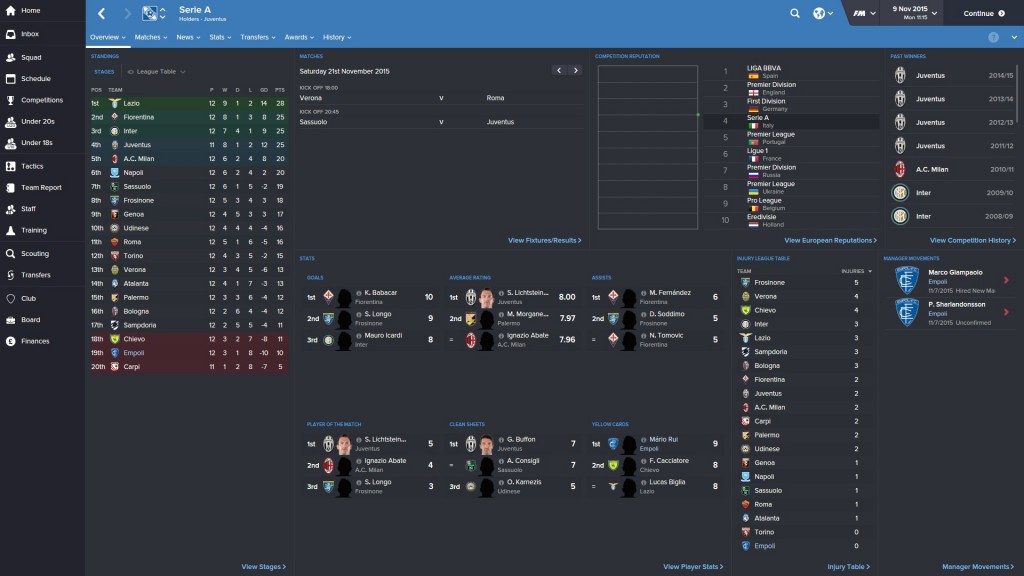 In amongst this I picked up young Argentine striker Nicolas Rios on a free, he looks like a decent acquisition and at this rate he could find himself in the first team before too long. Jose Valencia arrives on trial as well as we look to bolster the striking options. USA midfielder Jermaine Jones is also on trial, I want him more than Valencia but his wages are a bit trickier on our budget. 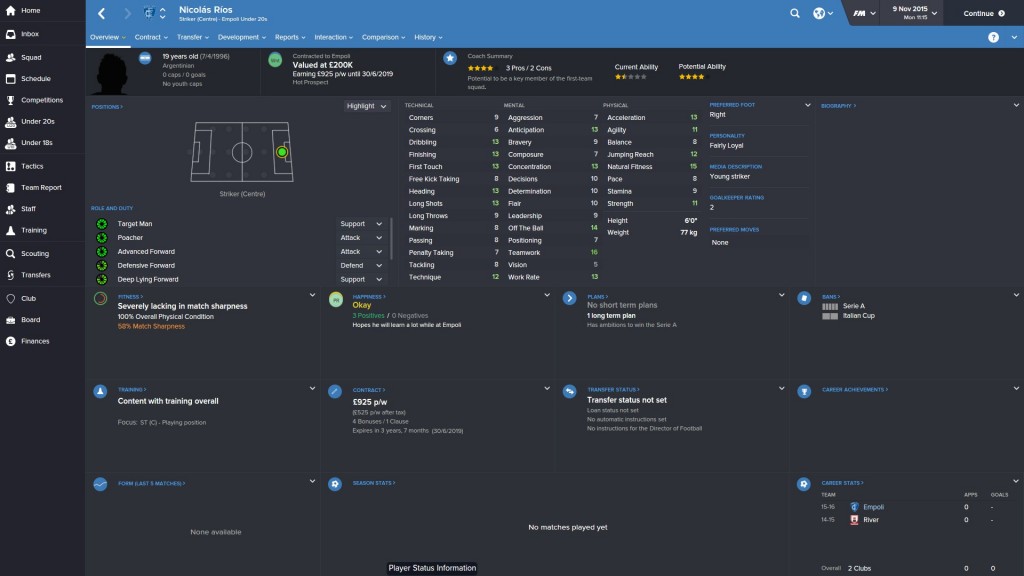 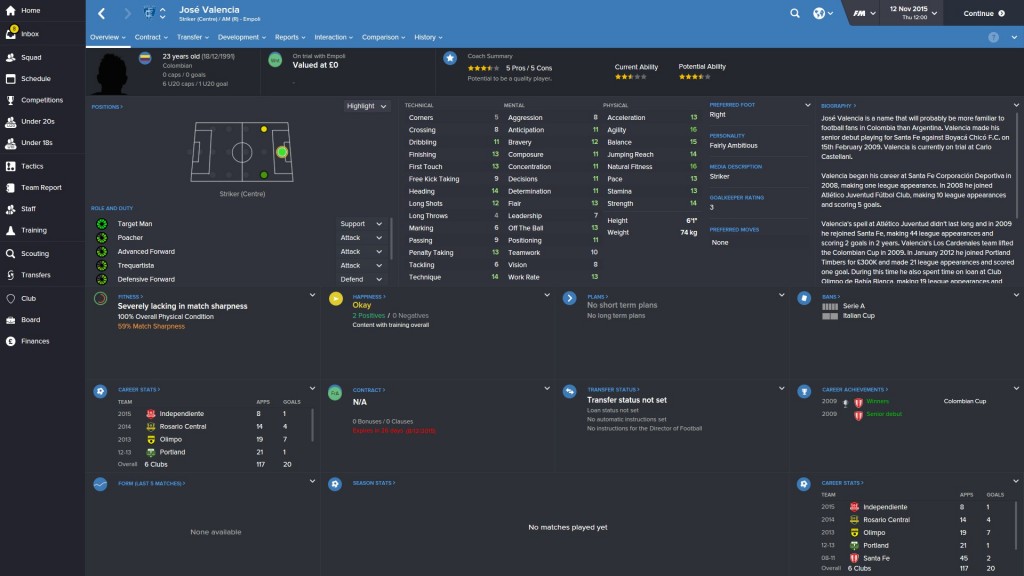 Just before the Fiorentina game this message popped up and I didn’t look at it at first because I didn’t think we’d be relevant. Chuffed to find out we’re fourth, hopefully we can carry that on as we go forward. 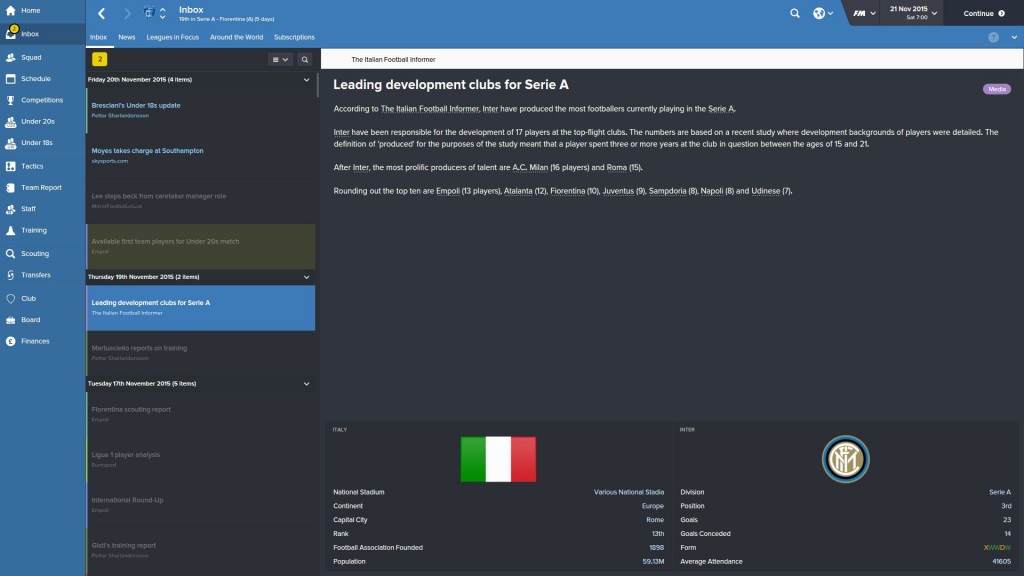 So as I mentioned in the first post Fiorentina are the big cheese in this area, they’re the dominant side in Tuscany and it’s my job to try and stop them. For this game I went back to the three at the back formation, wary that we could leave ourselves too open. As usual with Empoli we defended extremely well, we limited Fiorentina to pot shots, it was just slightly unfortunate that one of those pot shots went rocketing into the top corner off the boot of Mati Fernandez (I swear he always scores against me). The lack of chances created again is a worry and I’m still not happy with how this formation is working, it’s something I’ll be working on between now and the next post. I’m now wondering whether I should build a standard 4-3-3 to become my counter-attacking tactic away from home, I could use Saponara as a wide playmaker with more industrious players in the middle of the park, certainly something to ponder.

My conclusions from this period are two fold, firstly we are worryingly reliant on Saponara, even more so than I first feared. The most striking thing of that tough run was just how few chances we were creating, everything before and after that was going through Saponara, and Zielinski in particular has been a major disappointment. The second big point was that even when we were creating chances we simply weren’t putting them away, I love Maccarone but it’s abundantly clear that we need to try and find a striker who can work on his own sooner rather than later. The latter will probably have to be solved in the transfer window but between now and the next update I imagine there will be some more toying with formations and tactics, as I’m still not entirely satisfied, how can you be when you’re team is 19th!