In many ways, football is about movement; be it the revolving door of management, the positioning of the defence, or a clever run off the ball – both on and off the field, movement is key to success. In terms of transfer dealings, movement is also exactly what was needed in the autumn at Moss Lane and there was a significant amount in both directions, as certain positions were strengthened and players deemed to be deadwood were moved on.

Starting with the incoming transfers, Billy Simpson arrives as a multi-purpose squad player. A natural defender with a decent slice of technique, he will mainly play a defensive role in midfield should we need a rotation option – filling in for tiredness/injuries occasionally at full-back/centre-back.

My staff expect his growth to be exponential and he could prove to be an important player should he develop accordingly. One to at least keep an eye on.

The next two additions came as a result of my failing to find both a first-choice left-back and a competent centre back; therefore searching for ex-Altrincham players that I could possibly bring back into the fold. The first of which – Adam Griffin (Left-back) – should still be a very good option at this level and brings a wealth of experience both at Moss Lane and elsewhere. 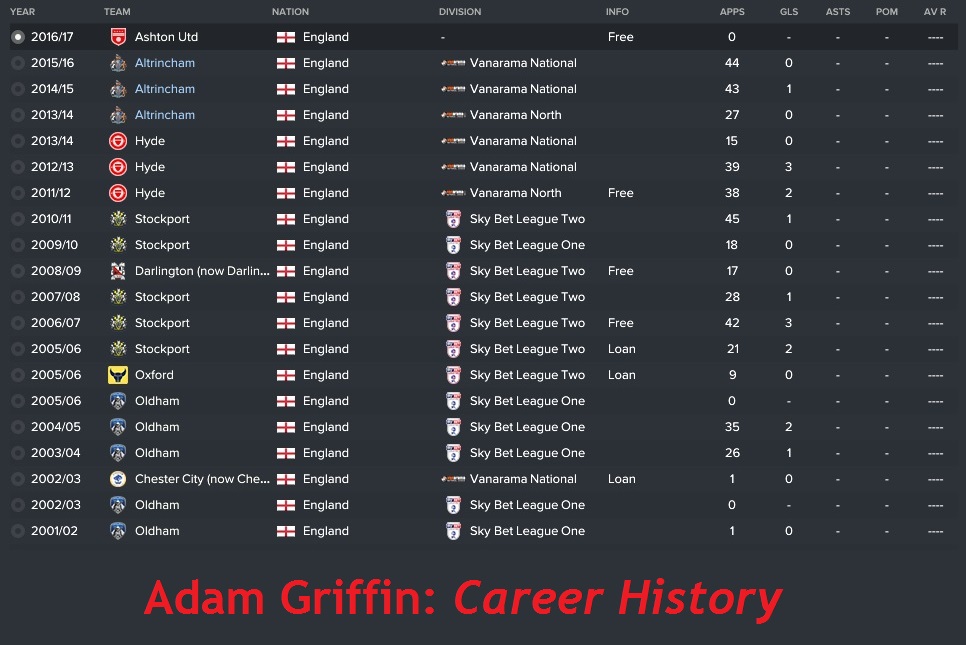 The second ex-Altrincham player to return was Tom Marshall, who’s aerial ability, strength and aggression make him a force to be reckoned with in terms of his sheer presence in defence.

His slow overall speed, shaky agility and Tries Long Range Passes trait mean he is more of a rotation option than a starter, but I will still expect him to have many appearances this year. I note the fact that his previous season IRL was cut short by an awful injury, but with my scouts not considering injury proneness to be a problem, I’m confident he’ll be an important member of the squad.

The next acquisition – Sam Smith – was the result of me scouring the database for a suitable rotation option for our Target Man – Craig Hobson. With several potential signings asking for ridiculous wages and several more having poor scout reports, I settled with Sam Smith despite his less than typical Player Traits for a Target Man.

An acceptable technical/mental game is bolstered by his excellent work rate and physicality and I’m confident he has enough to perform at this level should Craig Hobson need a rest.

THE STRANGE TALE OF DEREK RIORDAN

We’ve all had those moments on FM (especially in the lower leagues), where we’re seduced by a familiar name or a reputation that may brighten the star of our chosen team. That player for me this year was Derek Riordan. Now I know what you’re thinking – Who? What? Why? How? – but to a semi-professional team like Altrincham, a name like Riordan’s would get the blood pumping.

An exciting Scottish prospect when in his early twenties; the now 33-year-old Riordan was a tempting signing at this level and with his accomplished mental and technical game I intended to use him as an attacking midfielder to bolster my options. I also hoped to partially negate his lack of speed and strength by giving him a role that focused on finding pockets of space in which to operate.

What I didn’t take into account was his painfully low Natural Fitness and the impact this would have on his physical attributes in the short-term. Within the first week at the club, his agility, pace, stamina and strength all took big hits and by his second month (November) he had dramatically decreased in quality.

When it became obvious that his performances were not going to improve, I stopped picking him and decided to take the relatively small hit on wages by plonking him in the reserves. Then – in what turned out to be a stroke of luck for the club – he instantly wanted a chat, made it clear he wanted to leave and happily searched for a club himself. By the end of the year he had jogged off to Hednesford in the league below and both parties breathed a sigh of relief after such a swift conclusion the embarrassing escapade. I won’t be making that mistake again…

THE MAGIC OF THE CUP(S)

With tactics looking pretty stable, the league form above average and the squad being reshaped with better quality, the other main story of the autumn was Altrincham’s form in the two cup competitions.

Although punctuated by annoying losses away at Stalybridge and Worcester, we continued our marvellous early-season form into November and the FA Cup 1st Round appearance against Southend. A solid if uninspiring performance earned us a lucrative rematch but it seems like the cameras made their impact as what looked like awful communication/lack of concentration in the defence caused the opposition to race to a 3-0 lead at the start of the second half, effectively killing the tie. To be honest though, did we really stand a chance against a lineup with such comparatively superstar names as Simon Cox, Anthony Wordsworth and Anton Ferdinand? It’s a long way to the top if you wanna rock’n’roll…

Our spirits weren’t dampened however and we started our second cup run with a convincing 4-0 win over Tamworth in the FA Trophy and, though the next round saw Brackley force us to a replay, we were looking strong as the year came to a close.

The last two league fixtures could’ve been better (particularly with them both being against local rivals) but to move into 2017 in second place behind AFC Fylde on goal difference, there can’t be many complaints really.

In fact, scratch that, there’s always room for complaints… we’ve slowly started conceding more and more goals and with a quick glance at some statistics, the assists seem to come from a certain part of the pitch. Join me next time as I analyse this problem and attempt to work in a solution that will hopefully keep us tight as we try and push AFC Fylde for the top spot.