Although it was last discussed in detail at the start of the project, you may remember that a big part of my plan for VfL Bochum was to use their already good youth facilities to develop players with the long-term aim of having a production line of talent. What should make my job much easier is that the board agree with my sentiments with their only real philosophy of note being “Give Youth a Chance” ; they should be very pleased with me favouring the long-term strategy by giving game time to youngsters – even if it means it could cost us points in the short-term. Whether or not these players stay and become part of the first team squad is really not too important in the first few years and we could honestly use the funds from transfers to develop the facilities further anyway. But to really become a top contender in Germany (and then Europe), we will need a sustainable model and that means year upon year of talented players to support and eventually become part of the first team squad. 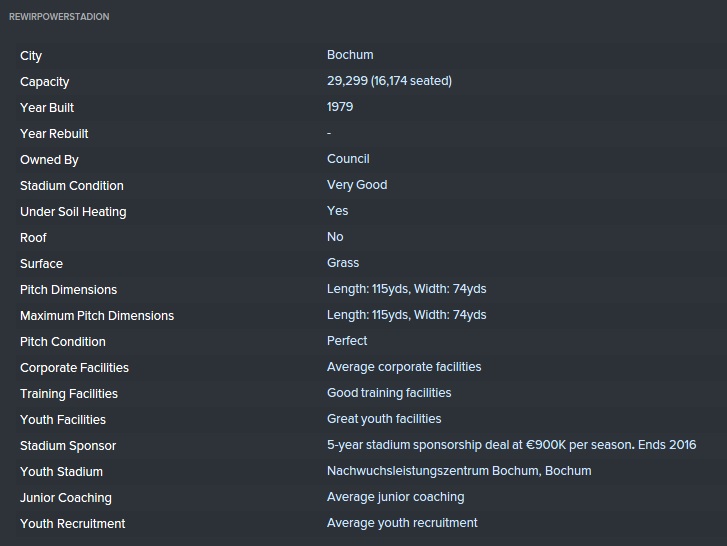 A cornerstone of this sustainable model is having the facilities to back it up. High quality facilities means a reputation boost as well as a more tangible boost in the rate in which your players improve; a key part of my strategy early on will be securing the funds for these facility improvements – which may have to come from player sales. Taking a more detailed look at the facilities in the screenshot above, Great youth facilities is certainly a bonus that will help the U19’s to develop quickly; yet the merely Average recruitment and junior coaching means that we may not be getting the best pick of the regens in the area – nor will they be likely to be ready for regular football without serious development work. Of course the current set-up is by no means a bad one and is actually quite a fair reflection of reality where VfL Bochum consistently punch above their weight in terms of their academy. Leon Goretzka is perhaps the most recent high-profile example of a Bochum graduate, with current squad members: Patrick Fabian, Andreas Luthe and Onur Bulut being more immediate examples to my plans. It is my hope to – at the bare minimum – keep this tradition alive as I aim to build a squad that contains as many academy graduates as possible.

So I guess the only place to start on this long and winding youth development road is to cast an eye over the current crop of youngsters sitting in the VfL Bochum Under 19s. My Head of Youth Development – Matthias Heidrich – will come in handy here as he is the best judge of potential amongst my backroom staff; although I will treat every youth prospect the same in terms of training, it is worth having an idea of who will eventually be good enough for the first team (and equally if it is worth holding out for a sizable transfer if clubs are interested).

What better place to start than with the top prospects and there are two that stand out from the crowd straight away – Tom Baack and Gökhan Gül. My staff are very excited about both of them and are confident that they have potential to be key players for the team; the interested parties would too suggest they at least have the capability to become 1. Bundesliga-standard at some point in the future. If pushed, I would describe Baack as a cultured centre-back who could perhaps have a future in midfield if his technical game developed alongside his defensive attributes. In terms of technique though, Gül is certainly the more capable and his natural playing position in central defence doesn’t seem to accurately reflect his genuine promise on the ball; I could see him as a full-back, midfielder or even a creative type as his game doesn’t really contain a significant weakness – definitely one to watch. 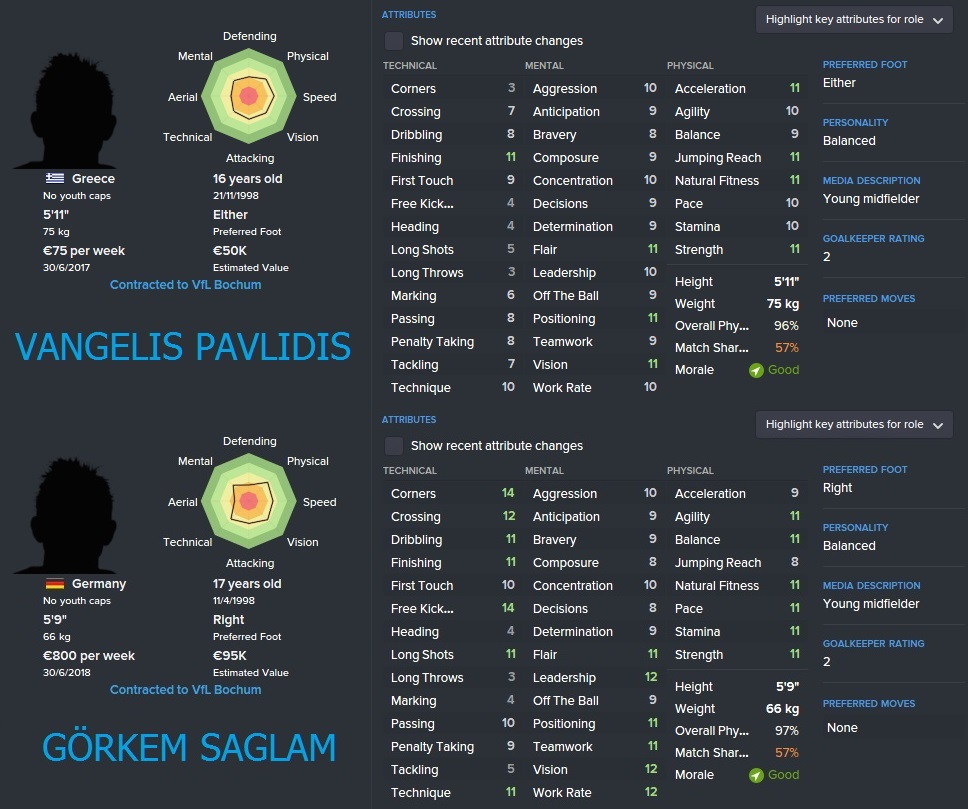 The next level down in terms of prospects contains a couple of more attack-minded players; the versatile Vangelis Pavlidis and the technically capable Görkem Saglam. Unlike the first two prospects we discussed they are yet to acquire interested parties, but I’m sure it won’t be long until they swoop in and take notice as Matthias Heidrich sees this second duo as being almost on a par with Baack and Gül in terms of potential. Pavlidis is certainly an interesting player who has a promising mental game (with no real weaknesses) as well as a solid finish for a 16-year-old; if he improves his overall technical game to match I could see him perhaps as a creative forward or an attacking midfielder. As for Saglam, his technical ability isn’t in doubt and – when you throw in some core mental attributes – we could be looking at quite the maestro on the ball; possibly developing into some variety of playmaker. His waif-like body could be a concern if he was to get caught in a midfield battle, but a solid set of physical attributes may mean he won’t be as easily dispossessed as his height/weight combination suggests at first glance. 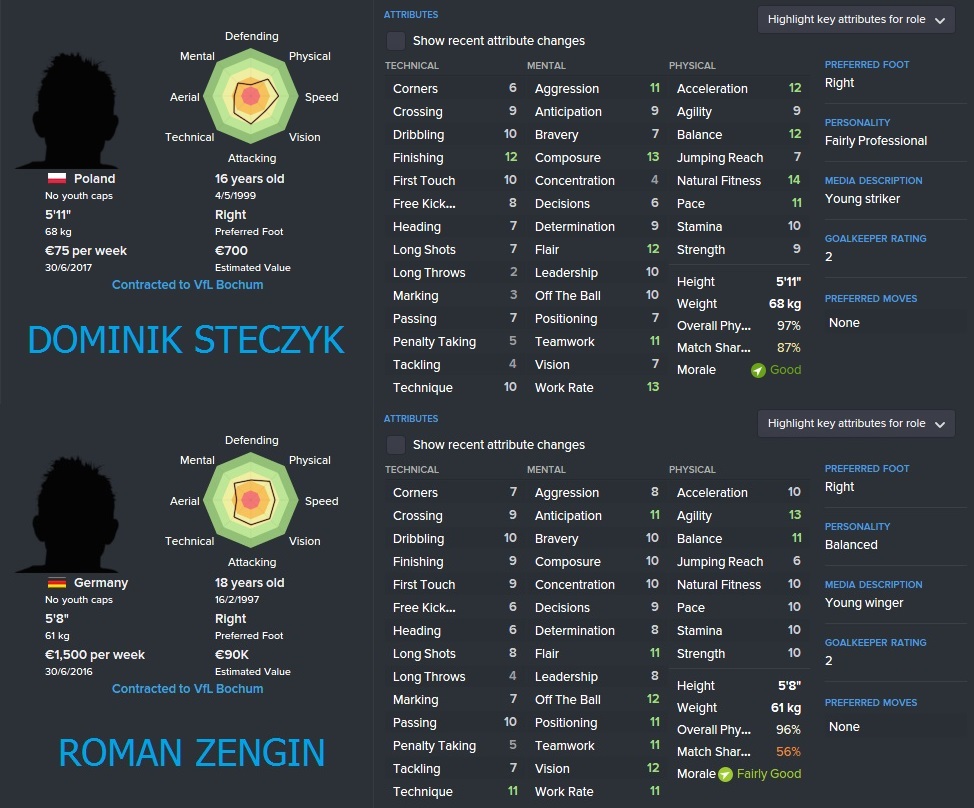 Moving on to the next pair of players – if my staff have predicted correctly – we are now looking at a couple of lads who only really have the potential to become 2. Bundesliga players: Dominik Steczyk and Roman Zengin. Starting with the 16-year-old Pole, we seemingly have a classic goalscorer type with some already promising striking attributes, good speed and a great personality. If he’s handled properly, I see no reason why Steczyk can’t go on to be a decent performer at our current level and – with the classic premium on strikers – we may be able to fetch north of €500k for him at some point in the near future. As for Zengin, he seems to be a similar type of player to Görkem Saglam, only with a weaker technical ability and – crucially – being just over a year older. His age means he will only get one year with the U19’s before being automatically promoted to the senior team so he will have to develop considerably to avoid being loaned out to continue his development. If I was pushed to make a prediction, I’d say we will end up selling him in 2-3 years time after a loan spell or two – hopefully for a similar price to Steczyk. 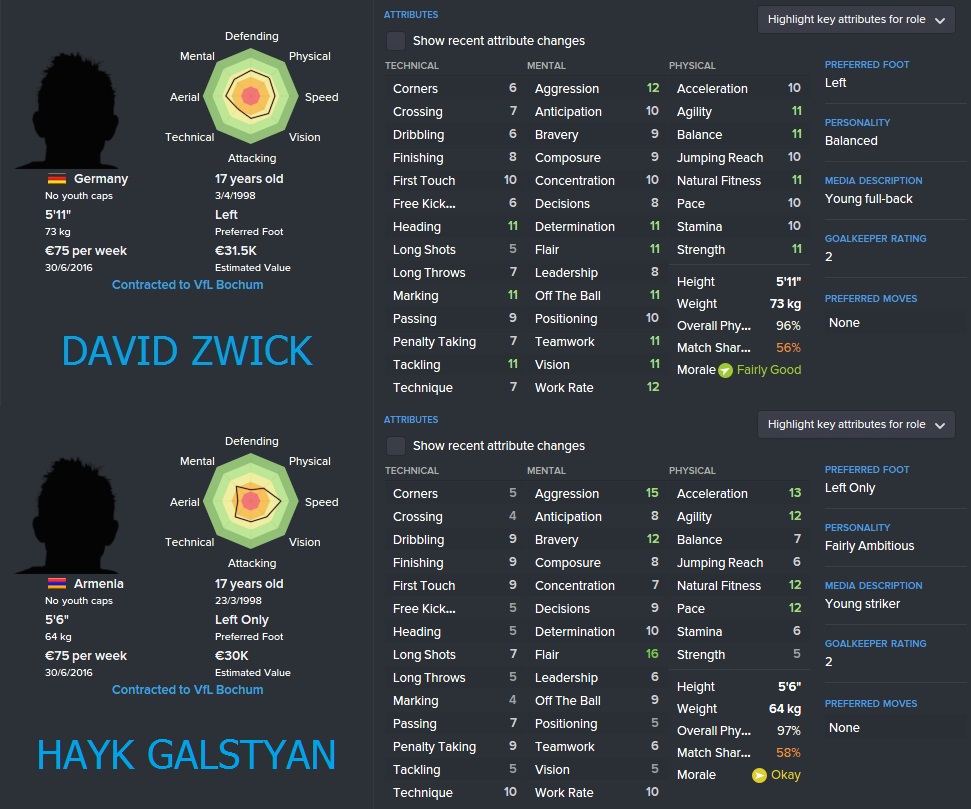 We now move on to a couple of left-sided players and once again my staff don’t have overly high hopes; David Zwick could perhaps have 2. Bundesliga quality but Hayk Galstyan may only really make the 3. Bundesliga. The diminutive Armenian has been poached from Hoffenheim’s academy and has some promising attributes in terms of his speed. Add this to a competent but relatively mediocre finishing ability and he could become a poacher-type striker – the proviso being that he works hard to improve. With Zwick however, we’re looking at a decent all-rounder who doesn’t look overly dissimilar to Tom Baack; a solid mental game and relatively cultured technical ability are big bonuses for a natural defender. I reckon both players may be of sellable value soon enough and I will probably look to cash in after several years of development; at a push, I’d say Zwick will probably have a good chance at fetching a half-decent fee whereas Galstyan may end up leaving for nothing if a suitable buyer isn’t found. 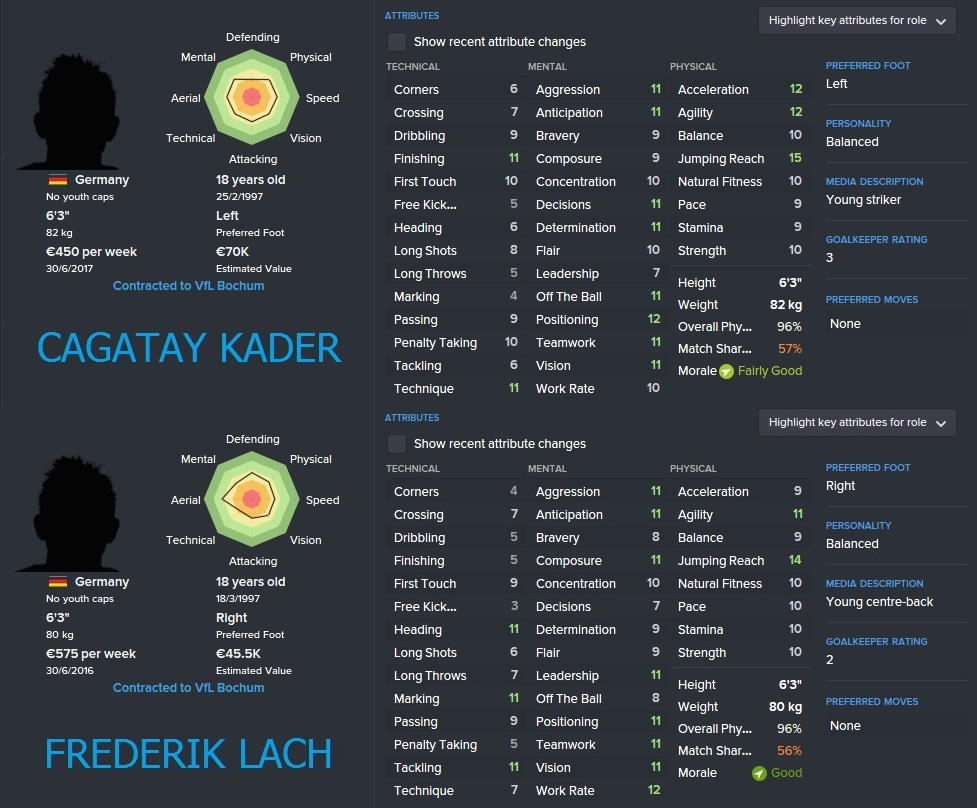 The final pair of players that I’ll be tracking closely are – like Zengin – a little bit older than the bulk of the players and are therefore perhaps a little behind where I’d want them to be in their development; Matthias Heidrich considers them both to be solid 2. Bundesliga prospects with Frederik Lach perhaps looking slightly more promising than Cagatay Kader. Starting with the man with Turkish heritage, Kader looks to be a great all-round forward player with a height that could cause defenders plenty of problems (IF he develops his heading ability). He may even get a game or two for the first team this season should I have an injury crisis up top and I don’t necessarily think he’ll embarrass himself with those attributes. Moving on to Lach, he looks to be a classic centre-back type with strength in the air and a great mental game to back up his solid core defensive attributes. If he were a year or two younger, we could be looking at a prospect to rival Baack but it looks more likely that he will develop into a half decent 3. Bundesliga player before the season is out – meaning he can be moved out on loan fairly easily next season. Cagatay too will probably find himself on loan next season but without some consistent development, I feel he may be a bit below 3. Bundesliga level – therefore making it difficult to find him a club.

Overall, I have to say I’m very pleased with this crop of youngsters I’ve been handed and it’s perhaps the most promising I’ve ever found in a second tier academy. With the solid backroom staff I’ve brought in and the existing training facilities I have high hopes of these players reaching their potential and – though I might cash in early in some cases – this group of players will hopefully be able to trace back the roots of their career to their excellent schooling at VfL Bochum.

The final piece of the puzzle with youth development is making sure your youngsters have a solid personality to drive their progress. Professionalism is the most important attribute in this respect and in order to make sure the lads apply themselves properly in training, I will be asking senior member of the squad to take the younger players under their wing in order to sculpt their personality. In the next article I’ll be looking at this in more detail as I pick out the most suitable tutors in the squad and pair them with the U19’s that could do with the most guidance.