What is football without goals? Some scholars would have you believe that the best possible result in football is 0-0 as it means the tactical discipline of each side was perfect; others would be more pleased by a 5-5 thriller comprising composed finishes, power headers and 30-yard thunderbastards – I am torn between the two.

The scholar in me likes a clean sheet as much as the next guy but the kid in me wants the joy of the goal and – when it comes to football – the kid in me always wins eventually. The scholar may recognise the need for a sound structure, but it is the kid that drives risk taking on the pitch – be it a skillful take-on, instinctive strike or a daring run. The real skill (of course) is balancing these two strands of thought to create frequent, high quality opportunities without leaving yourself vulnerable at the back.

So after some inner reconciliation between the kid and the scholar (and some theoretical tactical noodling), we are left with a system that should provide at least some chances to score. The only part of the puzzle left to discuss is the lucky lads at VfL Bochum who get to play the hero by converting chances into goals; the forwards; the strikers; Die Stürmern.

When using a formation such as mine – that uses two strikers and no player in the attacking midfield strata – it’s sometimes vital to ask one of the forwards to drop off the front in order to create a natural link with the midfield. That’s not to say it’s completely necessary (as it depends on the style that’s being created), but certainly in my mildly possession-based setup a forward is required to keep our passing options open by coming deep to find space ahead of the opposition defence. A Defensive Forward on support duty is the order of the day as I like the combination of work ethic and deeper link-up play; if he can use his physicality to win the ball back in dangerous areas it adds another possible route as we could potentially catch the opposition in transition. The key attributes for me here are Anticipation, Off The Ball, Teamwork, First Touch, Passing and a generous helping of Work Rate – and with all that in mind, I start to analyse the main candidates:

Something very encouraging at first glance is the work ethic of this trio of players and going off that alone, they all have a decent shout to appear regularly in the position. Janik Haberer in particular has a cracking Work Rate which – coupled with his speed and Aggression – mean I’m looking at a player who will fight doggedly to retrieve the ball. The Hoffenheim loanee already looks to be a great all-rounder with good movement, Technique, decision-making and a keen eye for a pass. His low Finshing and Composure mean he is perhaps more a Fernando Torres than a Sergio Agüero, but at 21 he has time to improve even if he doesn’t end up developing that part of his game to a top standard. 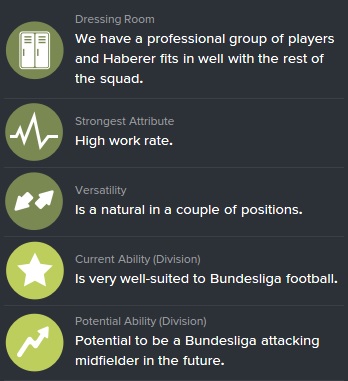 Moving on to Nando Rafael, we find a player that surely looks more like a rotation option in this position. Although he has his good points such as his healthy set of physical attributes and a fantastic personality; his PPM’s are not exactly desirable and his mental/technical ability only seems to be treading water for this division. I envisage him more as the target man type as he faces the midfield and looks to use his Strength and Balance to hold off defenders whilst his team catch up to him. He could bring a different dimension to my attack should I wish to use him like this on occasion, but as a part of my overall philosophy he’s a bit of a misfit. Although he can take comfort in his polymath-level language powers, when I say it I’m not being cheeky; Nando’s not that good (One of the best puns I’ve ever come up with so give me a break).

This leaves us with the journeyman striker – Simon Terodde – who started out with local rivals MSV Duisburg before turning out for Fortuna Düsseldorf and 1. FC Köln (which is like playing for Liverpool and Man United), before a stint in the capital for Union Berlin earned him a move back to the Bundesland that raised him and the welcoming, open-arms of VfL Bochum.

In terms of judging his ability, 16 goals last season (2014/15) is a pretty telling statistic and – looking at his attributes – he has everything you would want from a pure goalscorer; Finishing, Off The Ball, Anticipation, Composure and Concentration are all solid for this level, whilst his Aggression, Bravery, Strength, Balance and aerial ability means he will compete with burly defenders for everything in the area. Admittedly, I’m not sure he’s the best pick in the Defensive Forward role as an underwhelming technical ability means he won’t be the best player to join up the dots between midfield and attack, but he will definitely be in the conversation when it comes to the other forward role as you are about to see.

I tend to find that the goalscorer is always the final piece of the puzzle for me when constructing a tactic. From my perspective it seems much more logical to reconcile the scholarly part of my thinking first, with the goalscoring being the final bit of stardust sprinkled on top. The Advanced Forward role in my setup will be expected to be the chief goalscorer as he tests the back line with his movement hoping to punch through by isolating defenders whilst the rest are occupied. To these ends he needs excellent Off The Ball, Anticipation, Concentration and Work Rate with some solid decision-making to back it up and the classic Finishing/Composure duo to make sure he makes the most of the chances presented to him. A bit of pace wouldn’t go amiss too, but – as you are about to see – it seems my options are quite limited at the moment when it comes to combining all these attributes at once.

In addition to those discussed for the Defensive Forward role above, the only other player to add to the conversation is this decidedly happy chappy; the delightfully-named Peniel Mlapa. A product of the 1860 Munich youth sytstem, Borussia Mönchengladbach took a €2.5m punt on him in 2012 and tried to develop him for the 1. Bundesliga, but – after struggling to improve his game – he was loaned to the 2. Bundelsliga side F.C. Nürnberg where Mlapa showed his true level was some distance short of the Champions League that Gladbach aspire to. The former Bochum manager paid €300,000 for his services shorlty before my arrival and we’ll maybe have to wait and see if that was a fair price.

Of course, we can start trying to work out his current value to the team by looking at his attributes and after a first glance he is clearly a pace merchant; his overall speed could be devatstating in this division. The problems come when we when we dig a little deeper and he has a seriously underveloped mental game, a sub-par personality and is quite a poor finisher. The relatively solid Crossing means he could work as a classic head-down-and-run-winger if I was looking to use one, but I’m only really going to be considering him for the Advanced Forward position so I’m afraid that goalscoring ability will hinder his chances of tying down a regular place in the starting eleven. It’s a football cliché, but perhaps his pace off the bench can make an impact? 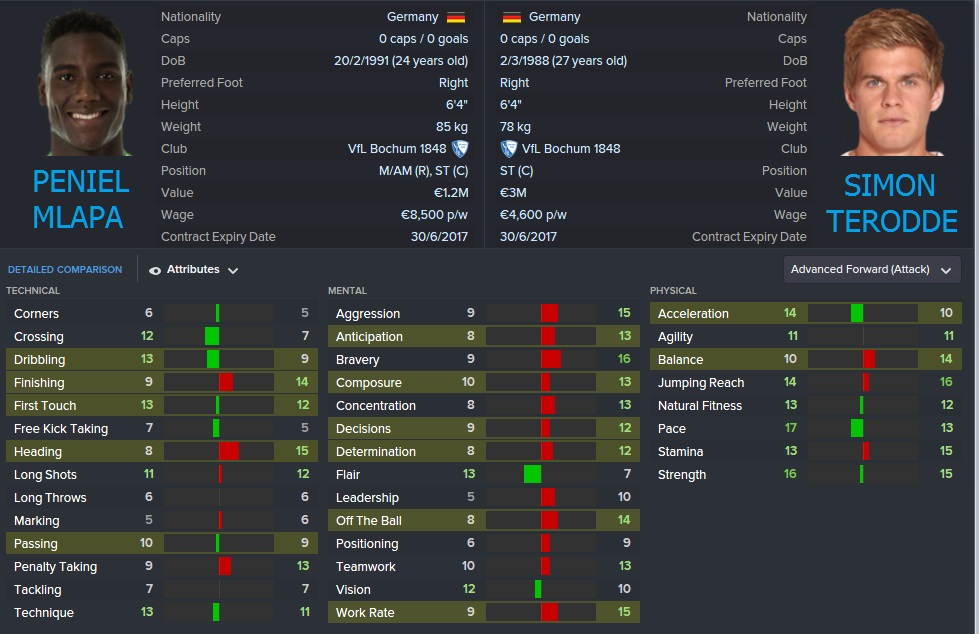 The final nail in the coffin for Mlapa’s place as a starter is his straight comparison with his direct competitor – Simon Terodde. In terms of a shootout over the Advanced Forward role, the only area that the man with Togolese heritage outshines the Bocholter is in terms of speed and dribbling ability; though the kid in me would likely be wowed by the tricks in Mlapa’s locker, the scholar is impressed by Terodde’s better football brain and – sadly for Mlapa – the scholar gets the last word on this debate. Simon will start but Peniel will be on the bench just in case we need someone more direct and – who knows? – those lower mental attributes might just be enough for this division anyway.

So there we have it. I’ve spent a whole four articles discussing my squad, it’s strengths and weaknesses and the probable starting eleven (injuries permitting) so what better way to round things off than to include a snapshot of my favoured lineup: 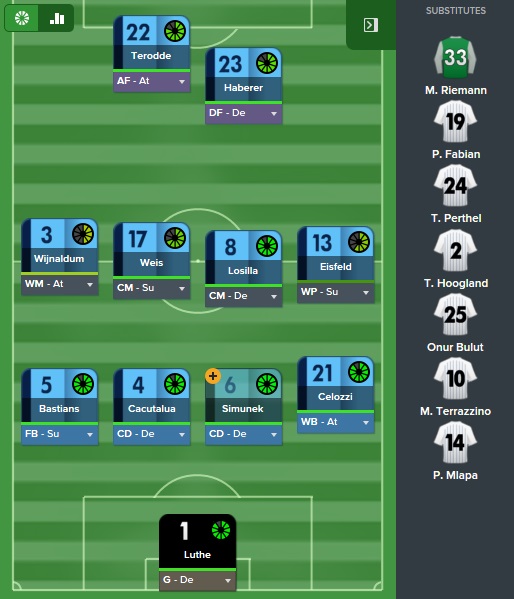 I’m pretty pleased with how it looks and we certainly have defensive quality across the back and in midfield; apart from a few caveats to consider – I’m hoping Wijnaldum settles into his new position quickly for example – it looks to be well balanced in terms of player selection and a good blend of youth and experience.

Continuing with the theme of player selection, I will be spending the next article discussing a couple of fantastic young players that I hope to develop for the first team so join me then as we discover whether Bochum have some genuine top U19 talent to work with.