After a protracted reorganising of my life forced me into a several month article hiatus, I felt it was time to jump back on the wagon, dust off my virtual boots and start asking my scouts to find me the next Jamie Vardy. So far FM16 has mostly been about tactics, tweaking and a new level of deeper learning for me, though like many of us I’m still prone to the occasional freak out of frustration when something just isn’t going as planned. To be honest, my most recent Altrincham save was binned when I took a few weeks off, came back and had no desire left to raise the sleeping Chesire giants to the pinnacle of English football, especially as it was something I’d done before. I needed a spark of inspiration…

Back to Germany, I thought. My adopted home and still an almost blank slate when it comes to my player knowledge outside of the 1. Bundesliga. Enter then, VfL Bochum 1848 – a relatively local side for me and one that I have started watching as regularly as work/the wife allows. In reality they’re a fairly average 2. Bundesliga outfit who have had a solid season but perhaps lack real quality in defence and a bit of mentality when it comes to chasing a game. In FM terms, the media reckon mid-table and once I boot everything up and jump in the hot seat, the board would be quite happy with a bit of mediocrity too, albeit in the top half of the league. Lovely, sounds a stable – if a little dull – position to build from. 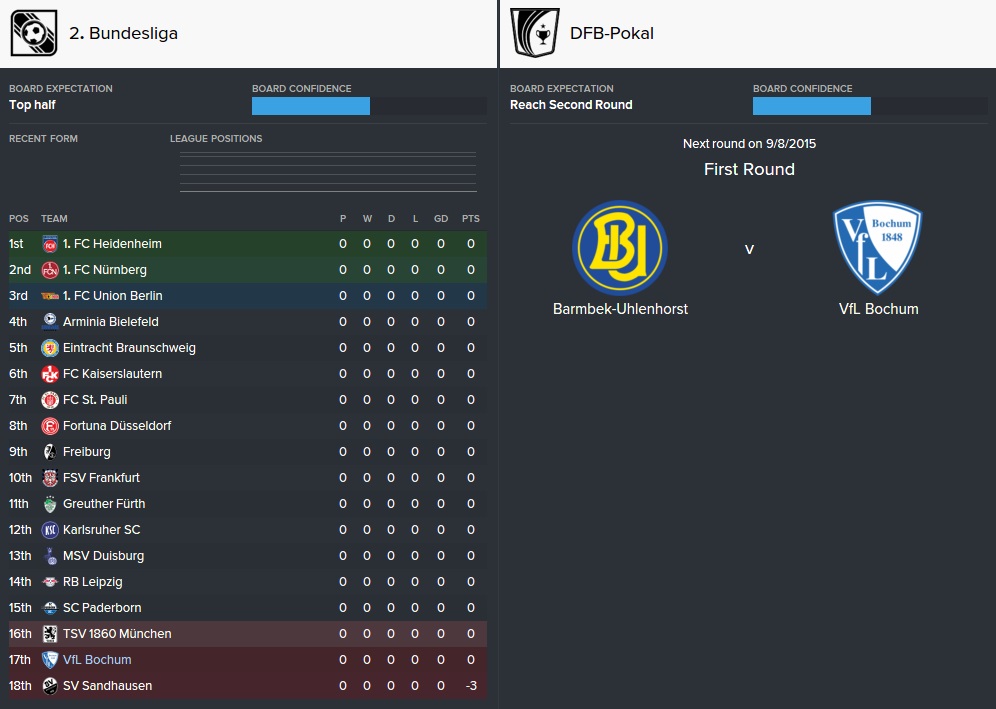 Now I should mention that one of my primary motivations for this new adventure is to do things in as much detail as possible. I’ve suddenly got more time on my hands than I have in years so I can drag myself away from FMT and onto my first full-fat FM16 save. With time to burn (careful, we know how that ends) I’ll be attempting to cover every angle and document as much of my thought process as possible when it comes to running the club.

First up then is that most important bit of groundwork, setting up a half-decent tactic that won’t get me sacked after a few months and see the whole project on the scrap heap. I’ve had mixed success in recent editions of FM when it comes to designing tactics, but the one consistency is that I tend to do a better job when I focus on details and avoid the temptation to blast through seasons (funny, that…). Another thing that tends to help is keeping things simple and going back to basics where need be, so with all this in mind I set out to create a tactic that I can properly understand and that isn’t too fancy. The first draft looks like this: 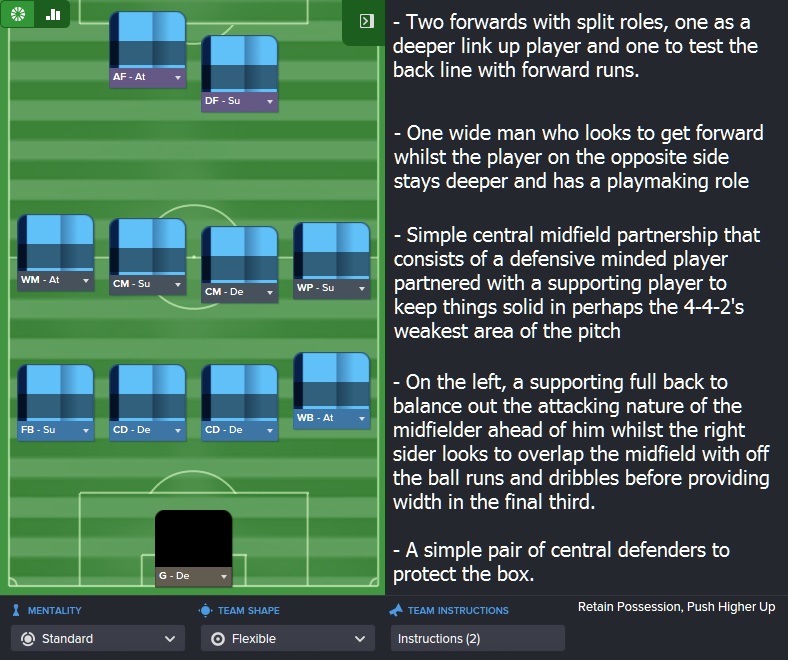 I’ve included a very brief run down of my thought process when it comes to duty selection but my overarching philosophy for this tactic was to have something based on possession, but not for possession’s sake, so we can maintain control of the game and limit the oppositions time on the ball but also attack with a bit of verve. I thought long and hard about the attacking combinations and partnerships I would see on the pitch and how they fit into the style, particularly the playmaker and his multiple passing options as he moves infield. I’m hoping the attack duties will add an element of risk to the set up that will make it mildly attacking, but with still enough caution to stay mostly in control of the play. Of course this style/strategy comes with it’s flaws, but as per my “keep it simple” inspiration, it’s a strategy and formation I understand and one I reckon I can pull off.

As for the tactical settings, the Standard mentality underpins the desire to be in control without being overly cautious, whereas the “Push Higher Up” instruction mainly exists to squeeze the space ahead of the defence and make sure the two banks of four are functioning as a unit. The possession(ish) style will be achieved my asking the team to “Retain Possession”, shortening the overall passing length and lowering the tempo meaning my team are more probing and cautious as they advance. Finally, a “Flexible” Team Shape has been selected in an effort to provide a bit of creative balance; I’m happy for some players to be let off the leash at times, but cautious of allowing too much freedom. 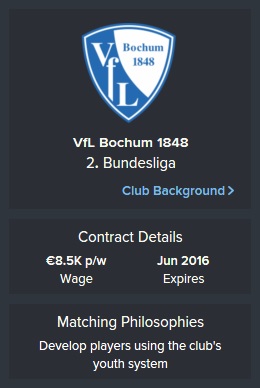 As for an overall philosophy, I’ll be looking for players with good First Touch, Passing, Anticipation, Composure and Teamwork to sync with the possession style. It won’t happen overnight, but if I can ensure that my players are technically and mentally competent in possession, then it can only benefit my tactics as the club grows. As a general preference I also look for Work Rate and Acceleration/Pace because I would prefer to avoid lazy/slow players if possible. That’s not to say I’ll be showing such players the door, but if it came down to a choice between two players with similar attributes, then speed/work rate would swing the decision. In addition to these attributes, I’ll be looking to use Bochum’s good youth setup to develop players for the first team as well as for sale. The board are also interested in this and have indeed asked me to give chances to as many young players as possible as part of their vision.

In terms of the tactical and philosophical groundwork, I guess that covers it. With a solid plan, I can underpin every decision I make at the club and justify it by referring to the original idea. I’m hoping the Bochum fans won’t know what’s hit them in this new era. They’ll either look back fondly in years to come remembering the visionary, youth development focused manager and his possession-based 4-4-2, or they’ll say: “Remember that pretentious guy that spent 3 months here trying to have us play boring, sensible football? Glad we got rid of him, Hans.” Either way, it’s going to be interesting…

Next time, I’ll be covering the first major step in implementing this plan: hiring the right staff to make it happen.