The Midfield. Das Mittelfeld. That crucial area of the pitch that is simultaneously a creative hub and a defensive screen; where passing patterns are woven and opposition attacks destroyed. Usually containing players with talents varied like the instruments of an orchestra, they can be tuned to sound as bombastic as an Italian opera, as balanced as a Viennese waltz or as playful as Brazillian samba. As the cliché tells us – it can be where the game is won and lost. Lucky then that the incumbent VfL Bochum manager built quite a varied midfield for me to work with, combining steely defensive players in the centre with lightweight but creative attackers out wide. In this article, I’ll be looking at the central area of midfield where a trio of very capable players should give me the central lock-down that my tactic depends upon. Let’s take a look at the contenders…

We’ll start with the more defensive minded of the two midfielders – the CM(D) – as I assess who will be most suitable to provide a screen for the back four. There are some strong candidates here with a lot of experience between them, so whoever I choose I feel I can be safe in seeing the role performed to a pretty high standard. A choice does need to be made though, so let’s see who’s in with a shout:

Straight off the bat, the eagle-eyed amongst you will have noticed Tim Hoogland from the previous article and he is indeed a versatile player being a natural at RB, DM and CM as well accomplished at RWB, RM, and RAM. Looking at his numbers in more detail he seems perfect for this sort of task, having solid supporting attributes (such as Passing, Off The Ball and Teamwork) as well as being above average in the standard defensive ones. The former Schalke man’s low Technique, Composure and Vision may hinder him should he find himself in the final third, but as a ball-winner/recycler he seems to fit the bill.

Talking of ball-winners, I seem to have a real terrier of a player in Tobias Weis, who’s speed, work ethic and Aggression – though perhaps bordering on the extreme – make him a force to be reckoned with (my assistant duly warns me of his competitive streak). His PPM – “Marks Opponent Tightly” – coupled with his top-notch Marking, Agility and Determination means the native Swabian would be ideal for neutralising a pesky opposition playmaker, but this belies a complete defensive ability which to might be lacking. His height (5’7”), lack of positional sense, lack of strength and barely acceptable core mental attributes (Anticipation, Composure, Concentration, Decisions) mean he perhaps isn’t suitable as defensive cover when I’m looking for a more stable character to anchor the midfield. Combine this with his unprofessional and outspoken personality and we have a player that is certainly useful but may endanger the team if given a defensive role.

Stability – in fact – is the exact word I’d use to describe Anthony Losilla. The vastly experienced Frenchman dishes out quality mental attributes like 2015/16 Aston Villa shipped goals – frequent and with high numeric value. His Concentration, Positioning and Teamwork are truly top drawer for this division, with his solid Anticipation and acceptable Composure making him much more of the anchor type of player I’m looking for. A lack of speed may hinder him on occasion, but his aerial ability, Strength, Stamina, Balance, Natural Fitness and resolute character describe a player who will stand his ground and shield the defence against a high percentage of central attacks. The more I look at it, the more it seems like Losilla has made the decision for me by being so bloody suited to what I’m looking for from a CM(D) in my system.

As for the other central midfield position – CM(S) – key attributes are a high Work Rate, solid technical ability, speed and a bit of Vision/Off The Ball to ensure the player stays in touch with attacking moves and offers a consistent passing option. Defensively, I’m not overly concerned with having a rock solid player, as long as he keeps up with the opposition and helps out his deeper, more conservative partner. The two main candidates have already been discussed above and a closer comparison reveals why a certain former Hoffenheim player has the edge: 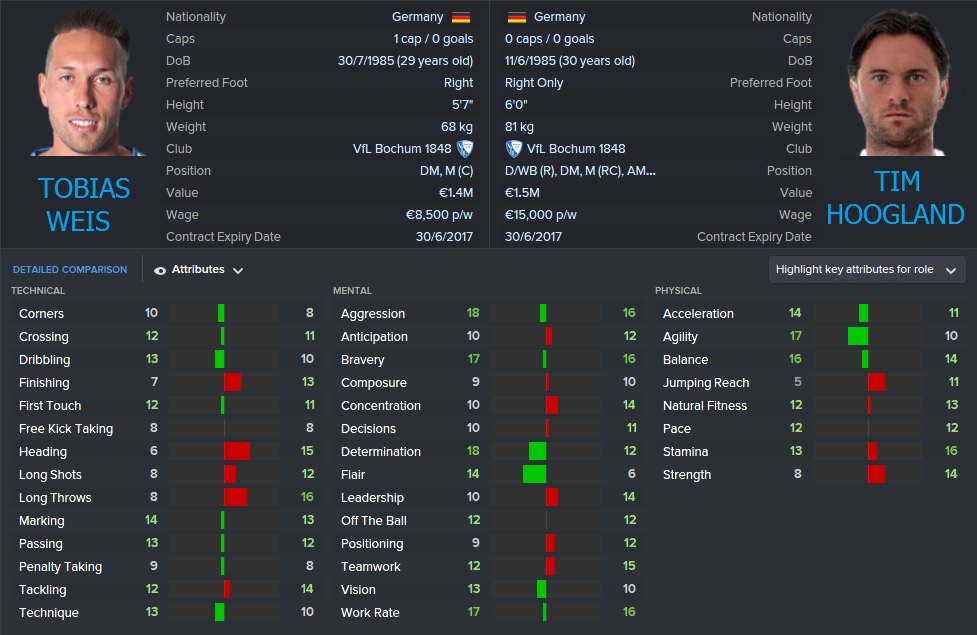 I feel a bit sorry for Tim Hoogland. He’s a great player for this division, but gets pipped to the post in all three of the positions I’ve considered him for. It just simply comes down to a few slight weaknesses here and there and the fact that I’m looking for a different set of skills to his in each position. The one-time Fulham man has plenty of very good attributes and is a great – if a little expensive – back up, but Tobias Weis has a speed, Determination and Aggression that means he can relieve stress on the CM(D) as well as lend support to the attacks. Weis also has better Technique, Passing, Dribbling and Vision, which combine with his Flair to give him a spark that could help us unlock defences should other more creative players have a bad day at the office.

Thinking about it, I’m actually quite confident in the pairing of Losilla and Weis as they should compliment each other nicely; a faster, technically competent, workmanlike player supporting a slower, more intelligent defensive-minded player. Isn’t that how great midfield pairings normally look?

With the core central area stocked with experience and quality, I feel that the 4-4-2’s natural weakness should be somewhat mitigated no matter who I choose in these two positions. The defensive nous will be entirely necessary should we wish to control games and stop the opposition overrunning us through the centre. Couple that with the decent technical ability and the middle can be used as a reliable area to help recycle the ball to forward/wider areas where I expect most goals to be created from.

As we move on to analysing our options in the wide areas, it’s all looking very positive. Join me next time as I dig through the more creative players and seek out a combination that suits the aims of the tactic.