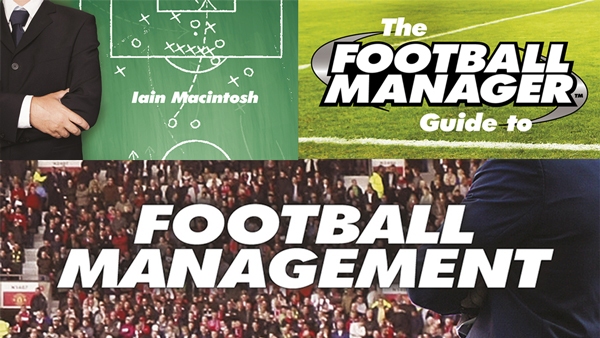 Have you ever thought of what it’d be like to learn to play Football Manager nowadays? For those of us who’ve played for decade/decades, can you imagine what starting the full career mode as a newbie must feel like? Probably like being given the Sunderland job after applying to work there as a work experience kid, I bet.

So it makes a lot of sense for Sports Interactive and Sega to release The Football Manager Guide To Football Management. Despite it being light on actual advice on how to play the game, Iain Macintosh’s eighth book (and second about Football Manager, the lucky bugger) acts as a cheery Ghost of Football Present to helpfully inspire your management efforts from the training pitch upwards.

The Football Manager Guide to Football Management is a pleasantly easy going read. Tackling subjects such as youth policy, transfer approaches and managing the press one chapter at a time, Macintosh has the enviable skill of being able to keep a chummy tone of voice on a variety of interesting topics without slipping into over familiarity.

As a result, you’ll rattle through chapters as if you’re reading one of the good Steig Larsson novels – sucking up insights from the likes of Jonathan Wilson, Barry Fry and Morecambe manager Jim Bentley – and having a bloody good time of it along the way.

And then you realise something shocking and disturbing – you’ve actually been quietly learning important things along the way. Rather than tackling the minutiae of a save, Macintosh is more interested in subtly introducing the reader to the higher concept aspects of football management – such as the obsessiveness of a Bielsan tactical system or the inappropriateness ‘when you come to think of it’ of Sir Alex Ferguson’s hairdryer treatment – in an accessible manner.

It’s to Macintosh’s credit that this works well, ensuring the book feels like a helpful primer to someone looking to learn about football management as a whole. However, despite the fact that I’m a fan of this approach, there is one thing about The Football Manager Guide To Football Management which could prove quite divisive: the relative lack of Football Manager in the book itself.

It isn’t totally off the agenda, of course. The tactics section contains a useful break down of player roles (which enjoyably describes your average target man as a “big hairy bastard”), while the final few chapters are entertaining examinations of the different type of manager personalities you might identify with when you’re in the hot seat.

However, beyond that, there is little contained within for someone looking to learn to play Football Manager from a practical perspective. There aren’t chapters on how to set up tactics, there aren’t extensive breakdowns of the way to set up a scouting network and you won’t be getting advice on hiring a crack coaching staff.

It’s all about interpretations

It’s something that’ll leave members of the community aghast and will disappoint some people looking for a practical guide. But from my point of view, I don’t really see that as a problem.

The reason why I think that is pretty obvious – this book isn’t really for me. It’s for someone like me who hasn’t played Football Manager and is terrified by the spreadsheets I’ve taken for granted. It’s for someone playing slightly naff mobile management games who want something deeper and isn’t sure where to start. It’s for a well intentioned parent who wants to buy their football loving child a Christmas gift, not realising this is to Football Manager what cannabis is to heroin (according to what those terrifying lessons I had at school said, anyway).

It is those people in those situations who’ll be likely to make the most from this book. They are the people who will benefit most from the major shift that has taken place in FM over the past few years and I’ve already spoken about – namely, the change from slippery sliders to the instructions led game we play today.

And though I think that there would arguably be a role, and great demand, for a much more game oriented book, for the market it intends to serve The Football Manager Guide To Football Management does its job rather well. And you can’t ask for more than that really, can you?