Ahhh, much better to jump in with a post after a few days rather than weeks! You join me on my quest to turn an old tactical idea into a functional tactical reality – the catch being I’m managing Altrincham who are relegation fodder in the Vanarama Conference. After putting the finishing touches to the basic 4-1DM-3-2 outline, my initial idea was to provide a broad analysis of the tactic in action with pointers as to what is working and what isn’t. However after reading several articles recently that champion the merits of breaking down the tactic into its constituent parts, I felt it would be a nice idea to write a series of posts about each position and the issues I found. First up: The Wing Backs.

There’s a big reason why I chose the Wing Backs for the first analysis and that’s because they seem to have been a bit of a nightmare in the first few fixtures! I was tempted several times to change something on-the-fly because of issues I noticed, but in the interests of creating a solid investigation into the tactic I kept the same roles and duties throughout the debut three games (LB – WB(A), RB – WB(S)). A good place to start would be a glance at the stats from these first fixtures as it will perhaps enlighten us as to some areas which require further study.

The main thing that sticks out like a sore thumb is the crossing contribution by both players and I will definitely be looking at that in further detail. Across the three games, Densmore has attempted 38 crosses and completed 4! This is astonishingly poor and suggests he is perhaps crossing speculatively (it’s also noted that he is quite poor technically so this could be a factor, but a roughly 10% success rate is abysmal). Griffin’s crossing stats are just as bad with him completing 6 out of the 53 attempted (roughly 10% again) and with him being the more intelligent, technical player, our problems must be mostly due to the tactic rather than the personnel.

Other avenues of investigation are the passing stats which are relatively consistent but not amazing. Densmore averages a 73% pass success rate across the three games whereas Griffin manages 67%. In isolation these percentages don’t tell us much, especially as Griffin’s pass completion percentage was extremely poor in the second fixture (56%) and it should also be noted that both players are defenders and have made several clearances which count as misplaced passes.

As for the defensive stats proper, I’m not too concerned about the overall picture with both players tending to win the majority of challenges they’re involved in and make a solid amount of interceptions. Griffin seems more aggressive (possibly due to his attack duty), attempting more tackles/aerial challenges and committing more fouls as a result – but nothing flags up as overly concerning. I’ll still take a look at where the tackles and interceptions are being made as this may give me a good idea about weak spots in the tactic that could be exploited by the opposition.

HE PLAYS JUST LIKE HIS DAD, AND THAT IS WHY WE’RE GLAD*

So, time to figure out what’s going wrong! We’ll start with Densmore’s crossing and after spending 5-10 minutes watching all the crosses back carefully, I feel I could put them into two main categories which go some way to explaining why he’s wasting the ball. The first main type of cross he attempts is a speculative drive into the 6-yard box as shown below.

He frequently finds himself ahead of play on the right side, getting played in with a through ball from midfield. In the scenarios where he reaches the byline, the three attackers in the box tend to be heavily marked so he gambles and drills the ball into the area. This isn’t an entirely terrible bit of play and results in 2-3 chances across the games mainly from my forwards being sharp enough to sniff out an opportunity. It’s not ideal though and I wonder about the better options Densmore would have if he were 10-15 yards deeper, in touch with the playmaker and with a wider angle of attack.

The second main type of cross is a cutback onto his left which invariably ends up being lower quality in terms of execution – detailed below.

As in the first example, he finds himself ahead of play but this time in a deeper position. The attackers are busting a gut to get into the box, but Densmore lacks the pace and technique to beat his man so chooses to cut back onto his left foot allowing the attackers to take up positions. He launches a ball the second they enter the area which fails to find any of his teammates. As in the first scenario, it’s not entirely bad and he shows intelligence in choosing to cut back rather than punt a hopeful ball into the area. The problem is his poor technique and the loss of touch with the midfield – meaning his only option is to cross as soon as he finds space and sees the attackers in the area. Again, if he wasn’t as committed to getting forward, we might have a greater chance of building something by having the ball out wide and in space.

After looking at the crossing in isolation, I already have a couple of ideas of how to remedy the problems in Densmore’s play:

Both options have their merits, but I suspect I will need to take more into account before making the best decision on his role. Below we see a couple of Densmore’s passing maps which at a quick glance seem to reinforce the loose findings from the crossing analysis in that he is getting forward very readily.

Discounting the throw-ins, most of his completed passes are in the opposition half and his received passes are virtually all in attacking positions. His attacking intent is proven further by his misplaced passes of which many are risky through balls. He is clearly looking to have an impact further up the pitch, which is great but I’m not sure it’s what I’m looking for on my more conservative flank.

An additional quick glance at his tackles/interceptions (I won’t include a screenshot) showed me that he does get back into the right areas to help the defence but his overall contribution is certainly weighted more towards the attack. I’m honestly thinking that a simple role change might do the trick, bringing Densmore back into a less aggressive position where he can wait for an attack to develop rather than bombing down the touchline.

*Shaun Densmore’s dad played for Altrincham in the 80’s/90’s when the club lifted an FA Trophy and gained a name for themselves by knocking several established league teams out of the FA Cup – most spectacularly Birmingham City at St. Andrews (a team containing David Seaman and a young Julian Dicks). The fans sing this chant as a show of respect to the family and their impact on the club.

Before I come to a full decision on how to alter the right-sided Wing Back, we’ll spend a few minutes looking over the play from the left side. Griffin was equally culpable for the crossing wastefulness, but I should still check over his highlights to check whether is play can be seriously improved. As before, I spent 5-10 minutes looking over his crosses and once again they fall into two distinct categories – the first of which is illustrated below: 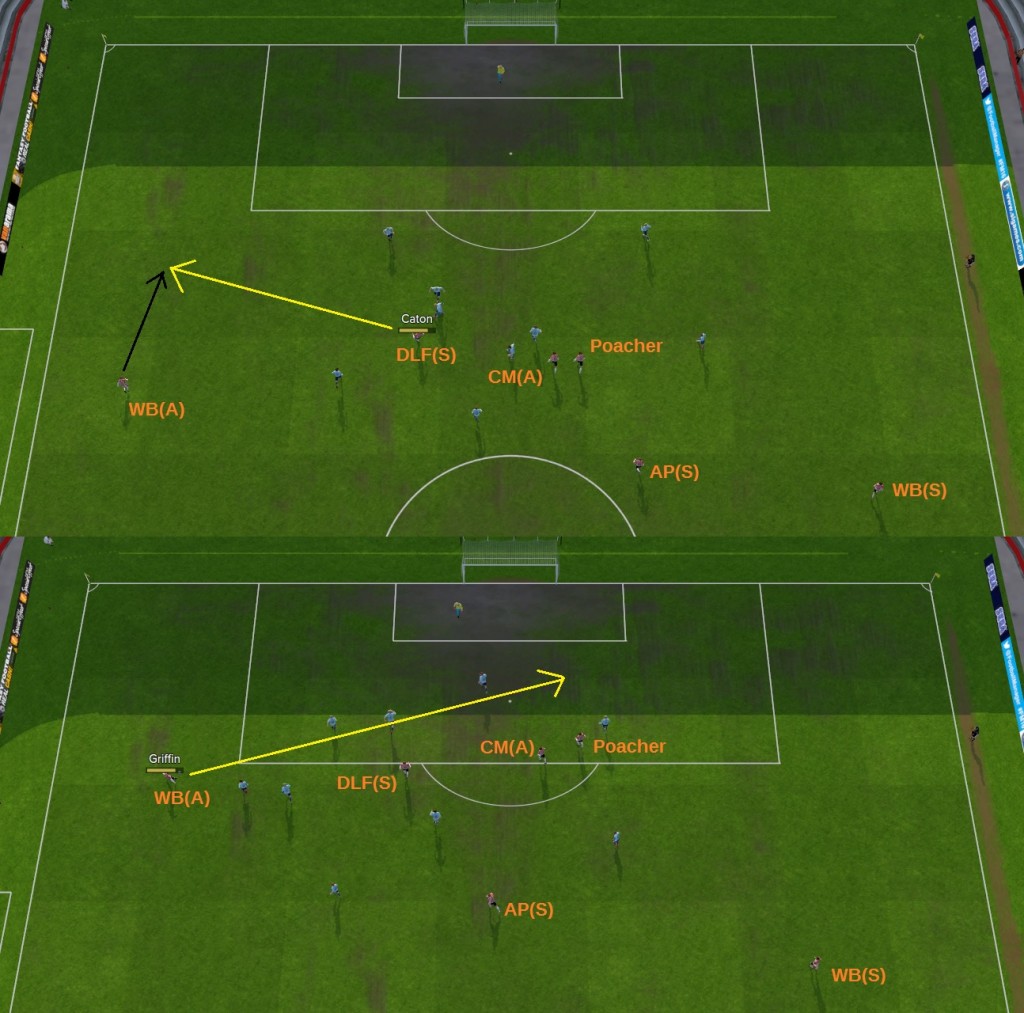 As was also typical for the right flank, the wing back makes a wide run from deep and finds himself unmarked and in acres of space out wide. A simple through-ball sends him on his way but he chooses to cross early when it could be argued that the attackers aren’t in particularly dangerous positions (the CM(A) and Poacher are almost holding hands as they enter the area which I’m sure I will touch on in a later article). As with Densmore on the right, it seems he feels it necessary to cross as soon as I get men in the area – maybe it’s a creative freedom thing or my forwards are moving too early? It wouldn’t be a bad idea if I had a large presence in the area to pluck these sorts of balls out of the air and create a problem for the opposition, but as it stands my attack is composed of players which look to latch onto through-balls or shorter passes. The second situation I see often is more encouraging as we see below.

Although this sort of scenario was far less likely to occur, when it did Griffin would invariably produce a dangerous cross and was more likely to connect them. Here he receives the ball with men already in the area and rather than cross early, he chooses to slow down and jockey with his opposite number for some space to cross. Showing his better technique on the ball than Densmore, he produces a lovely ball into the CM(A) who connects with a shot that is somehow saved acrobatically by the keeper. Seeing this makes me think that creative freedom is playing a role as the WB(A) role would normally aim to get to the byline and take on his man before crossing such as in this scenario, rather than trying the more ambitious deeper crosses. When he uses his skill to dribble and slow down the tempo it gives the attackers time to position themselves in space in the area, meaning his role at the moment seems ideal for him.

The other possibility is his mediocre Vision, Flair and Anticipation but they are hardly awful and perhaps only slightly below the division average. It’s a conundrum that may be solved by adjusting Team Shape and therefore the creative freedom offered to attacking players. I’m wary of adjusting this based off one player though so I simply make a note of it for future reference.

As for Densmore, the change is a little more clear-cut and I settle on the first of the original options.

By my reckoning, this should bring Densmore more in line with the defensive side of things, forcing him to support attacks from deeper areas rather that overlapping and getting crosses into the area. This more sensible play will keep us more stable and prevent the wastefulness in the final third occurring so often. If I’d just added the PI, I wouldn’t have garnered these additional benefits to his overall play so that’s why I plumped for the more holistic change.

So that’s it for the Wing Backs at the moment. Carrying out this in-depth analysis has been a very interesting inexperience and it’s good to narrow down your tweaking options to a couple of things. I guess once I have a fuller picture of what’s going on, I can pick and choose the tweaks that will make a difference. Sometimes there’s nothing worse that making a lot of changes at once because then you’re back to square one when it comes to analysing your tactic! Up next I’ll be looking at the Centre Backs and the Anchor Man as they form the core structure of my defence. Without giving too much away, I’ve had some pretty big holes appearing and it’s time to discover to what extent these core players are at fault.