In the first part of this series, I used the FM tactics creator to cobble together the shape and the settings that would hopefully mimic Lucien Favre’s Mönchengladbach side of recent years. Various articles and diagrams informed my decisions beforehand, but the important part is the subsequent analysis where I get to see if it actually plays out how I envisaged. Football Manager is as funny an old game as the game of football itself, replete with unforeseen consequences that would make Gordon Freeman’s eyes water (yes, that’s a Half-Life reference). You can choose the settings with the best intentions, but end up with problems that you did not expect.


In pre-season, I tweaked the formation a couple of times but steered away from anything drastic as it was important to gain fluidity and have some trust in my decisions. First, I dropped the two CM’s to the DM strata in an effort to limit the space the opponents were finding in between my midfield and defensive lines… I then actually ended up tweaking them back to their original place in the CM strata as I felt there was a disconnect with the forward line, with the two DLP’s being forced to play long balls to heavily marked forwards. After this small bit of experimenting, I felt it better to curb the pre-season tweaking so I held back from changing anything else, allowing the team to settle into the chosen pattern of play.

After an average start to the season proper, including a routine cup win (against very weak opposition) to add to a draw, a win and a loss in the league, we faced the first real test as AS Roma came to Borussia Park in the first Champions League tie of the season. I felt this would be the perfect game to analyse in a little depth as they would pose me a variety of problems in defence and attack that the previous four fixtures had yet to throw up.

STARTING AT THE START – THE SHAPE

We’ll start off our analysis of the tactic by taking a quick look at the heat map vs. Roma and the average positions of the players. In isolation, maps like this can be lacking in usefulness as it doesn’t tell us anything about the actions the players were performing. What it can give us though is a base from which to start the analysis and a chance to compare it against the images in the first article from spielvelagerung.de. 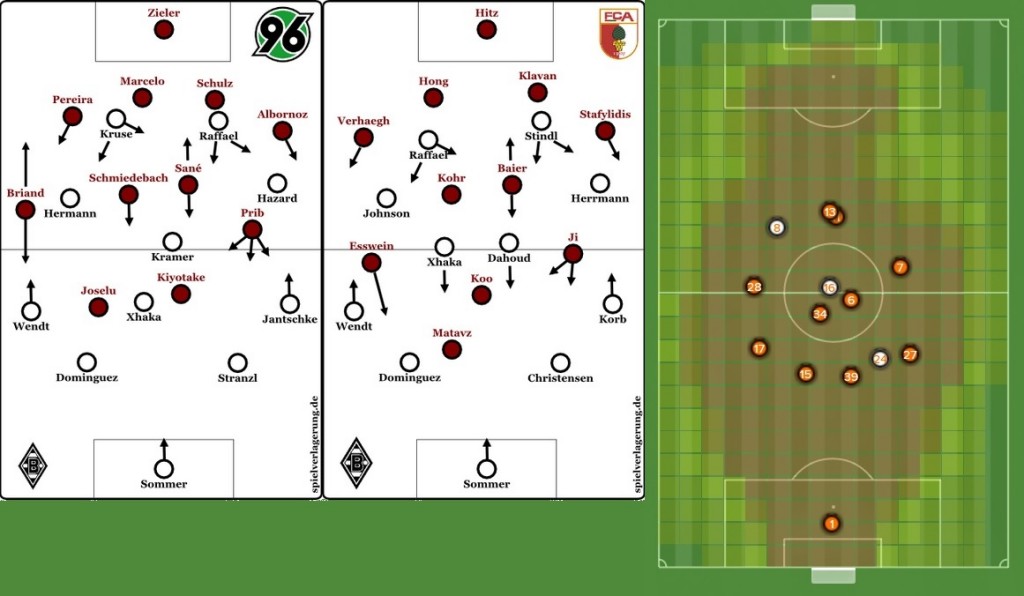 The first thing that stands out a mile is the mess we are in up front. The strikers are way too far forward and their overlapping positions suggest that their swapping is not as organic/situational as I’d like it to be, with an almost 50/50 split. It’s almost as if it’s been calculated by a computer! Not to worry, I should be able to encourage fluidity in other ways, but that isolation is something that requires a solution.

Apart from that, the shape is almost spot on with the only other concerns being the narrowness of the two CM’s and the very deep full backs (getting the CB’s to split so wide would be a real challenge in FM and would probably require an overhaul of my set-up, so I’ll steer clear of that for the moment). The full back problem should be a pretty easy fix though and I reckon a swift change to Wing Backs will give me more support going forward without being too outrageous with overlapping runs. As for the CM partnership, the average position alone is not overly concerning; it’s more to do with the cover they provide and their passing choices.

Following up the hint provided by the heat map, I should look in particular at how the team attack, keeping an eye on the movement of the forwards. A minute into the match and I am already seeing signs that the attacking play could do with improvement. 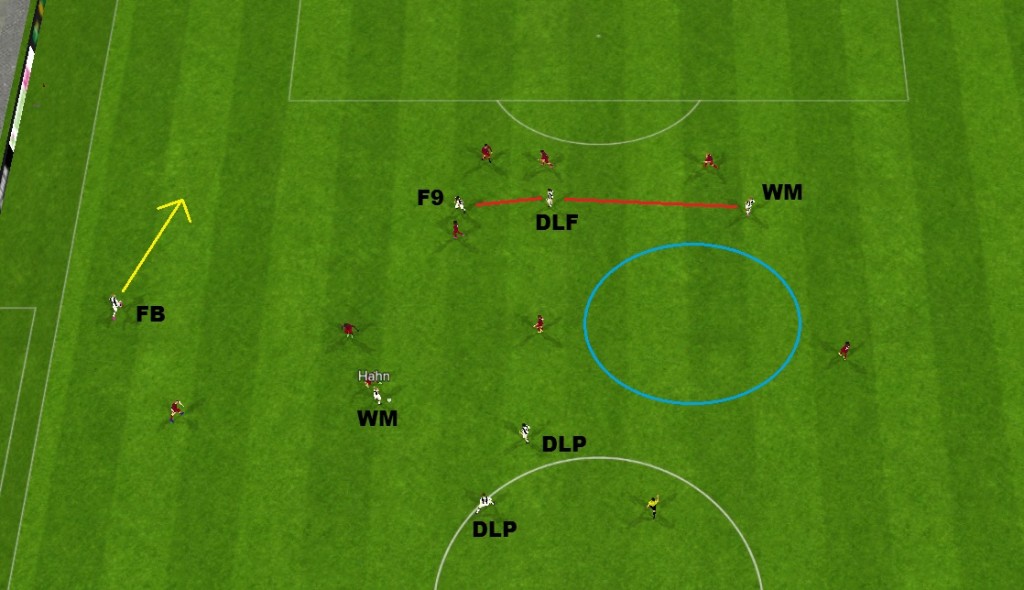 Here we see Hahn on the ball. Cutting inside he actually fails to spot the excellent run made my the left full back, but this isn’t a major cause for concern. I have a much bigger issue with the forward line formed by Raffael (F9), Stindl (DLF(A)) and Herrmann (WM(A)). They are all pushed up against the defence, showing aggressive intent, but failing to provide a link to the midfield. The area circled in blue is ripe for exploitation from one of these players and would provide the attack with a natural staggered shape, giving us more passing options. I actually noticed this sort of attacking dysfunction a few times on either flank, with a WM joining the forwards and no-one being too inclined to drop off the front.

There are a couple of ways we can address this, but the most logical for me would be to adjust a few duties of the four attacking players to limit this aggression and encourage more link up behind the forward line. The False 9 can be a strange role with and he perhaps has too much freedom at the moment, so I am thinking that a Defensive Forward may be a better option with a more consistent deeper position. The high energy and pressing would also be faithful to Gladbach’s style so it doesn’t worry me that I am veering away from the original plan. I’ll keep him paired with the DLF(A) as I think it’s important for one of the strikers to be more inclined to make forward runs, whilst still keeping that slightly deeper starting point. In addition, I’ll get rid of the positional swapping as it doesn’t have the desired effect in practice – in reality, the Gladbach forwards are known for swapping sides rather than interchanging roles.

Another adjustment that could provide more link up is toning down the duty of the WM(A) on the right side to a WM(S). With two players attacking on the opposite flank, I found his aggression to be unnecessary at times and verging on suicidal with so many players having attacking intent. This will hopefully provide balance with the Defensive Forward on the opposite side as these two players act as a positional link between the cautious midfield and the aggressive attack (in theory!).

Just to make things extra hard, the next scheduled game after AS Roma is the juggernaut of FC Bayern München, as we entertain them at the classic German kick-off time of 15:30 Saturday (it has to be a 24h clock in Deutschland). I have to say, I felt the tweaks would certainly give us better attacking balance, but the sheer class of Bayern would surely see them through the match as winners. After all, it’s Bayern, they always win in the end…

OK, don’t get too excited. This is a tactical experiment, not a proper career save, we’re taking baby steps, no need to… OH SOD IT! WE BEAT BAYERN 2-0! Take that Pep and your Lederhosen clad cronies.

But seriously, this victory was no accident. The tweaks worked their magic and I seem to have made a tactic that is pretty faithful to Gladbach’s overall style. The first goal was a result of Bayern being stretched wide, with the central area being exploited by interplay from the two deep forwards using a through ball as an assist. The second goal was the result of a sharp counter that allowed a pacey wide player to overlap the forwards, receive a ball in space and then play in a simple, short pass to give Raffael an unmissable opportunity. Both very Gladbach goals.

To top it off, the forward line was functioning in a much better way, with a staggered approach that always gave us a passing option. 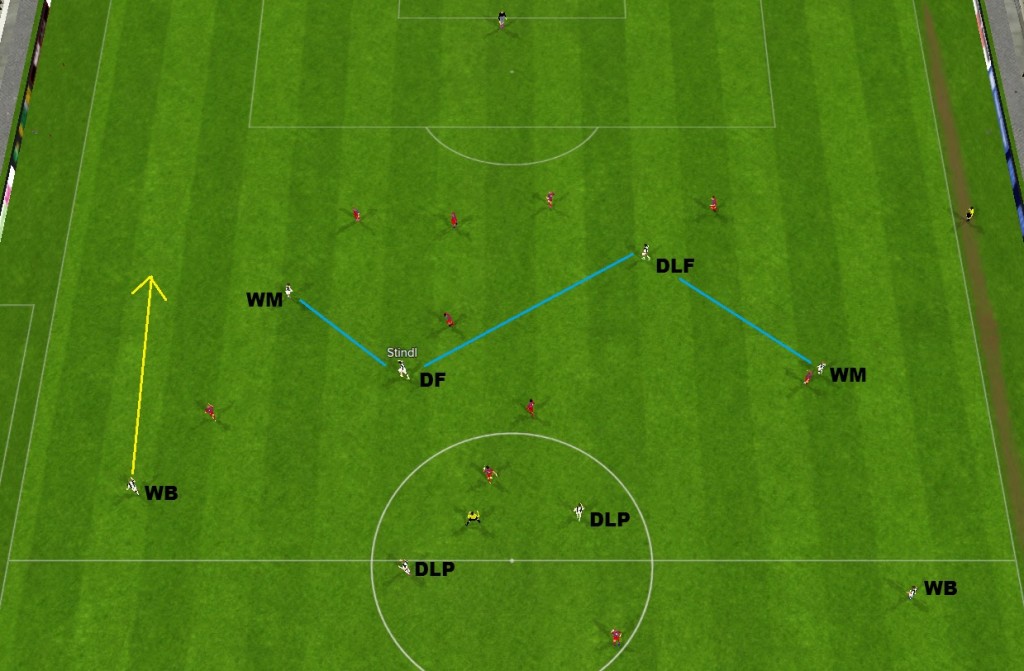 As we see here, the Defensive Forward drops off the front to receive the ball in midfield, allowing the left-sided WM to overlap (as the WB provides width). On the opposite side, the DLF makes a forward run which is complimented by the WM being more cautious.

In the original research I did for the tactic, I read several times about Gladbach’s shape morphing from a 4-4-2 into a 2-4-4 in transition and this is exactly what we see here. The key fact is that none of the players are too concerned to breach the opposition’s back line until nearer the box, making the counter-attack very dangerous – much in the same way that many strikerless tactics do. The emphasis is on well-timed runs into space and finding these men with quality through balls; the attacking principle that served Favre’s Fohlen so well in the 2014-15 season.

Although the Bayern game would suggest that I have successfully recreated the tactics of Borussia Mönchengladbach, it still seems like an awfully small sample size from which to draw a proper conclusion. That said, I’m really happy with how the tactic looks so it’s probably fair to say that the major tweaks have already been made. For posterity, i’ll whip through 10-20 games and see how things end up. Join me next time as I round-up how it turned out and summarise any further changes (should they have been made).