It happens to all of us at some point. You have a phase where you don’t play the game and it just doesn’t grab you; the thought of starting a new save seems desperately long-winded and your current saves don’t quite have the “X” factor. After the Wolfsburg experiment hit a brick wall, I drifted away from FM, had the obligatory crazy back half of December (flights, booze, flights+booze) and came back to it in January with minimal desire to perfect the disciplined 4-2-3-1. I’d been away too long and couldn’t get back into the rhythm of testing – the lack of Bundesliga at the moment certainly doesn’t help either!

But never fear, I’m going to continue my tactical blogging with something that I just have to do every year – take the helm at my beloved Altrincham FC and (attempt to) mastermind success with their astonishingly limited resources. I usually go for a classic 4-4-2 as their squad is geared towards it, but after tidying my desk I found some scrawly notes from a few years ago (that’s how often I clean up) and decided to resurrect a tactic I used in FM14 in the Belgian lower leagues (hipster alert).

Now as the game changes slightly with every edition/update, it’s important to use my notes as a starting point and not simply copy the tactic over from a previous version and expect it to function well. Also, it’s much more exciting to go on a tactical journey rather than plug-in and let the points rain down (or more likely, slip away). So, what was contained within these scrawly notes? 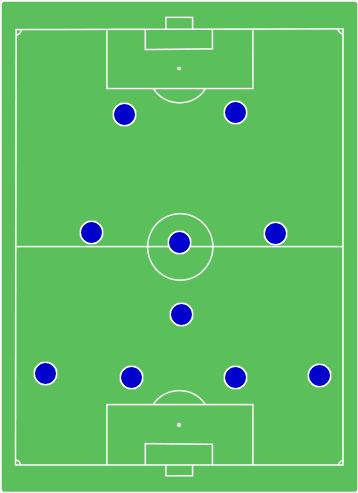 As a basic outline, it’s pretty simple and I’ll move on to the roles after a short description as to what I’m expecting with this framework. The 4-1DM-3-2 Is a pretty decent defensive shape and a sensible distribution of roles should give us solidity through the middle. The Fluid team shape is included as it is part of my general philosophy to have a smattering of creative freedom as well as a broad split between an attacking and defensive unit, underpinned by an emphasis on teamwork. The Standard mentality could be described as a “cop-out” but I prefer a positive spin, so we’ll call it a “best of both worlds” approach. I’m keen not to retreat into a miserly defensive attitude, but also quite averse to high risk direct football so I’ve settled on the middle ground. Close Down More will give us a positive direction in that we harass the opposition and limit their time on the ball. This should also hopefully negate a weakness in the formation in that we only have one wide man per flank – if the outer midfielders are encouraged to fan out in their pursuit of the ball, we have a greater chance of forcing a turnover via a cross-field pass or a risky through ball. As for Be More Disciplined, this is the second part of my philosophy as it should soften the positional switching inherent in a Fluid approach whilst emphasising the teamwork aspect by keeping the players in the correct shape… that’s the theory anyway!

Now I included a named FM role for each position in my original notes (i.e. Advanced Playmaker (Attack), Wing Back (Support)), but in the interests of starting afresh I’ll just include the outline of tasks expected of each player in the hope that the role choice can be an experiment in itself; are my ideas sensible or is it a load of codswallop?

THE MIDFIELD THREE
– Dynamic combination of a defender, technical passer and forward runner
– Player on same side as more attacking wide defender provides aggressive defensive support
– One of the remaining two players should be a playmaker and allowed to take more risks to unlock the opposition defence
– The final player should be more attacking and look to support the two forwards as often as possible via runs, passes and with attempts on goal

THE MORE ADVANCED FORWARD
– Work the defence with aggressive pressing and by taking up positions in space
– Sniff out chances in the area
– Score goals!!!

Reading it back my feelings are mixed. Half of me is thinking that it’s a very logical plan and should succeed after a couple of rounds of solid analysis (from what I remember I over-performed with the Belgian outfit). The other half of me isn’t so sure. That midfield balance is going to be key as the wide defenders advance – I’ll be keeping an eye on how we recover our shape in transition as that natural space we concede out wide could mean a lot of players moving into uncomfortable positions as we start defending.

Ponderous predictions aside, I’ve got my FM act together and turned these scrawly notes into a rough tactic that I will unleash upon the Vanarama Conference in our very next game. I’m actually implementing this tactic in March of the first season as I’ve been trundling through the save trying things out and thus far treading water with a 10-point cushion to the drop. 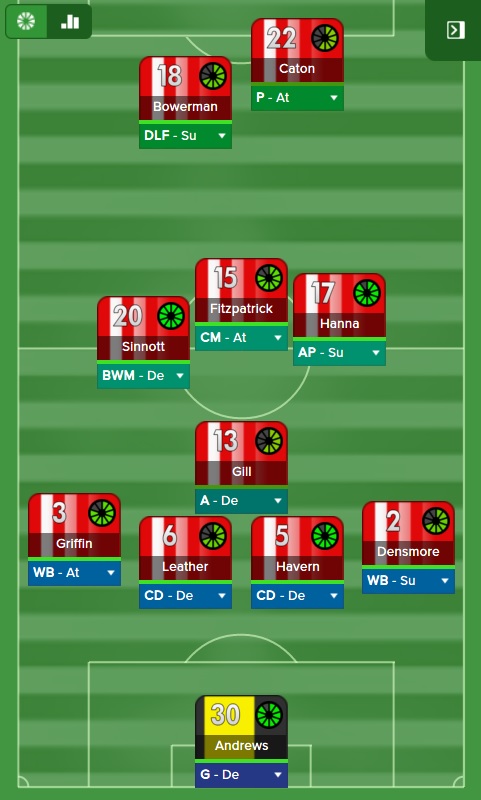 As per my role descriptions, I’ve gone for a balance of ball-winner, playmaker and forward runner as my midfield three. I’ll be expecting the BWM(D) to stay a little deeper than the other two midfielders, cover for the advancing left back as well as delaying the opposition in transition as we look to reform into our solid defensive shape. The AP(S) will be another key role and I expect him to sit a little ahead of the midfield line and look for the forward runs of the Poacher, CM(A) and WB(S) as well as the odd cross-field ball to the WB(A). Finally the CM(A) will add the attacking support that my strikers will require via his penetrating runs and forward passes. I will be looking for him to overlap the DLF(S) and make sure that we have numbers in the box for the crosses from the Wing Backs.The Anchor Man is another choice that seemed to make sense. I don’t want him to be a playmaker and I don’t want him to close down the opposition too often. His task is simply to sit behind the midfield and hoover up any attacks that look to cut through the heart of my defence.

As for the strike partnership, the DLF(S) is expected to hold up the ball and allow the CM(A) and WB(A) to overlap him. Coupled with the Poacher sitting on the shoulder and AP(S) taking up a position in the hole, we should have a variety of routes to goal as well as players to keep the defence occupied with runs.

In the next article (I promise it won’t be another month!), I’ll detail how the first few games went and what I’ve learnt about my 4-1DM-3-2. I’m especially looking forward to using ProZone as I’m yet to fully get the use out of what looks like a fantastic tool. I expect that there may be problems with the midfield balance and I’m also apprehensive about the team regaining its shape in transition. There’s only one way to find out!

Also, if you’re interested, this is how the Wolfsburg tactic ended up after the narrow experiment blew up in my face! – Dost is a DLF(S) 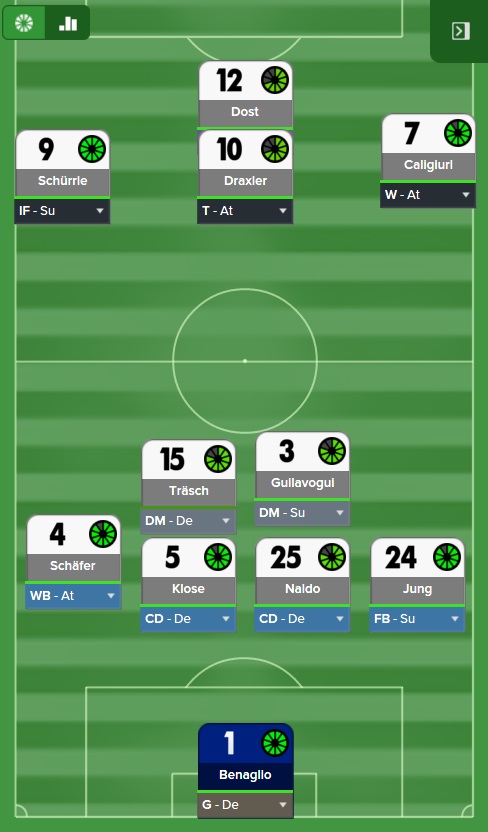