In the last article, I discussed the basic style and approach of VfL Wolfsburg, generating a base tactic for FM16 in the process. After having blitzed through pre-season and moved a few games into the season proper, it feels a good time to start analysing whether or not the tactic is both stable and a faithful representation of the real life Wolfsburg. We start however with an aside with a relevance that will be established later…

NARROW AT THE FRONT, WIDE AT THE BACK

I was fortunate earlier this week to be able to watch the extended highlights of the Augsburg-Wolfsburg game, which ended up being a bit of a 0-0 thriller. Augsburg probably had the better chances and a late controversial sending off for Dante could’ve been the death knell for Die Wölfe but they held out. As for the approach they used, one of the first things that struck me was the way in which their shape evolved in attack as the front four were focusing on creating confusion with movement and rotational runs, particularly the “strike partnership” of Dost and Kruse (ST and AMC in my shape). The player in the hole seems to get through a lot of work as he links the attack as well as getting into the area as often as possible. The nominal striker conversely drops off the front line in an attempt to create space for the three players attacking the box.

As for Wolfsburg’s overall shape, something that was clear right away was how narrow the front four were operating. This is balanced by a back four that offers a little more width as the wide defenders move up to support the attack. As discussed in the previous article, the wide play is not focused on overlapping runs, but support from the back line is clearly a key component of the play. This is all facilitated by the deep midfield which of course allows the wide defenders to be so aggressive. Here are a few screenshots to illustrate the point: 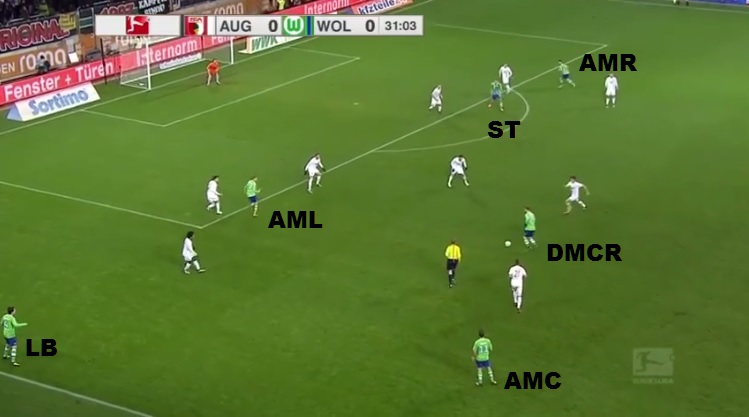 As we can see here, the left back, Ricardo Rodriguez is pushed high up the pitch and is looking to stretch the play simply by giving the Augsburg back line something to consider. Schürrle at AML is running into the channel, whereas Vierinha at AMR is heading around the back of the full back. Dost drops off the front looking for a ball to feet but with Kruse out of position on the left side and some poor decision-making by Arnold, the move actually results in a long shot that misses the goal. 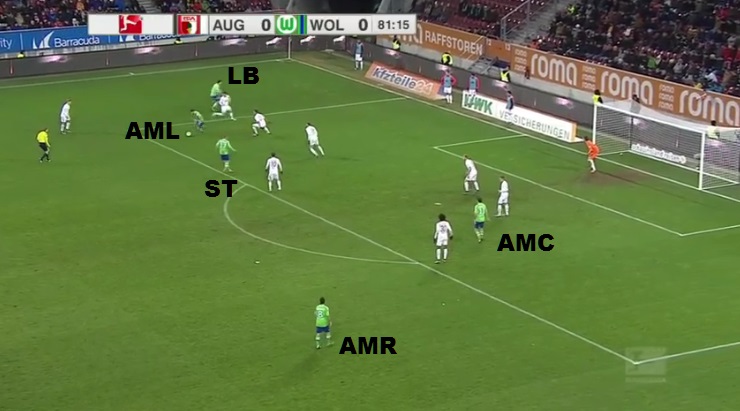 Once again the left back provides width whilst the AML – now Caligiuri – cuts inside and attacks the box. Dost has dropped off the front again with Kruse moving beyond him as the most attacking central player. Vierinha at AMR is acting more as a supporting player and he looks to balance the high position of Rodriguez by staying behind the attack, though not in a wide enough position to stretch the defence.

Finally here are some average positions from Wolfsburg’s last two games, just to help visualise their shape in 2D:

The key things to note are:

Now having watched the game, it gave me food for thought and I went away with a couple of scrawly notes about the things that were most prominent with the intention of looking for evidence of it in my system on FM. Being relatively happy with the base tactic I’d come up with in the last article it felt like perhaps only the positional switching of the strikers would be something I’d have to implement, but when analysing the first game of the season, something quickly became apparent…

WIDE AT THE FRONT, LEAKY AT THE BACK

I’ll start off with a most telling bit of analysis; the average positions in the first game of the season (a 4-3 defeat away at Stuttgart). 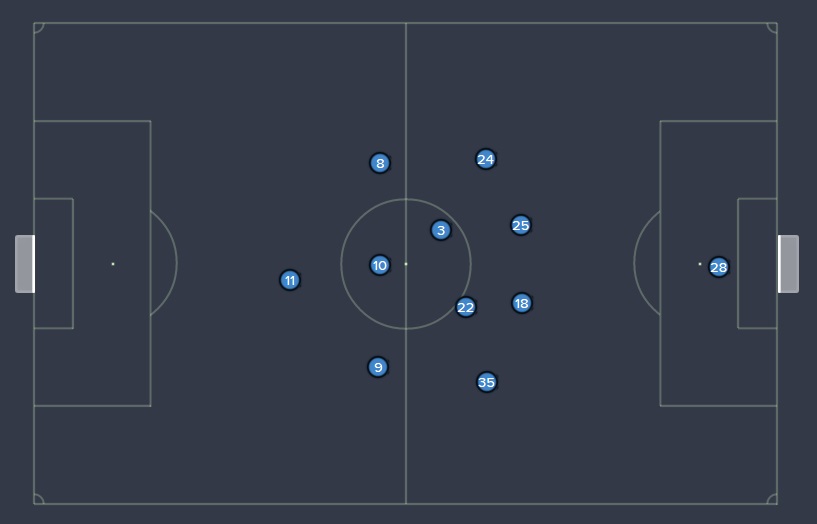 Well anyone will be able to see the differences between this map and the examples of the real Wolfsburg in action above. Of course these average positions were generated by a game so it can’t take the nuances of real football into account, with its fluidity and human qualities, but the diagram doesn’t lie as we’re about to find out. 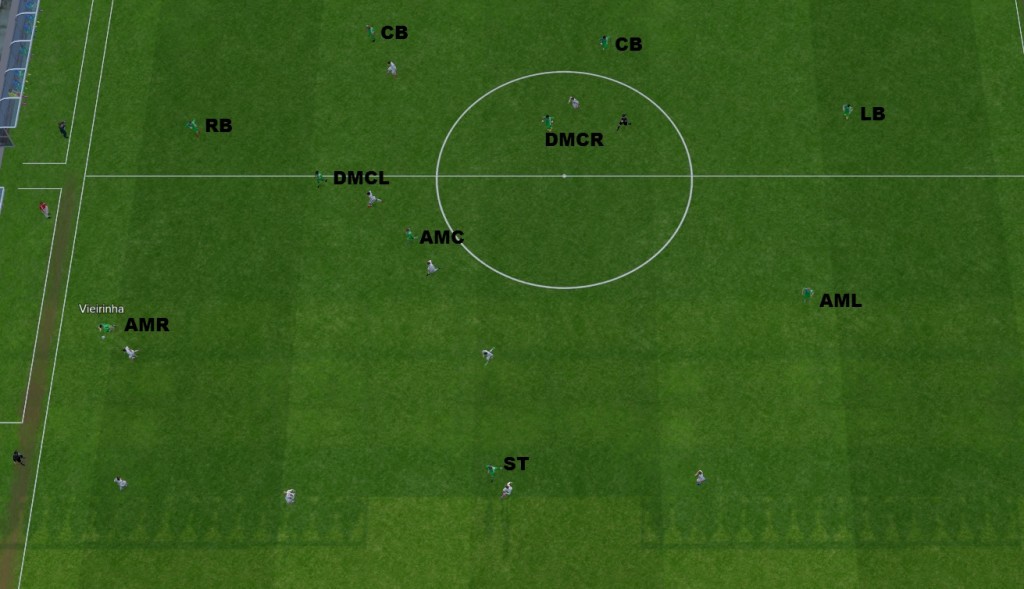 This is a typical attempt at starting an attack by our AMR, Vierinha. His role as a Winger means that he looks to head wide for the touchline and beat the defenders ahead of him with some trickery, though on a support duty he crosses earlier. The AML, Schürrle on the opposite side of the pitch is also pretty wide and tends to stay out there until he is in the final third where he moves inside to try to support the striker. As for the striker, he does a good job of keeping the defence occupied but there is no-one close to him that could offer him support should he receive the ball. Finally, the AMC certainly doesn’t seem attack minded enough and is content to sit in midfield offering support. 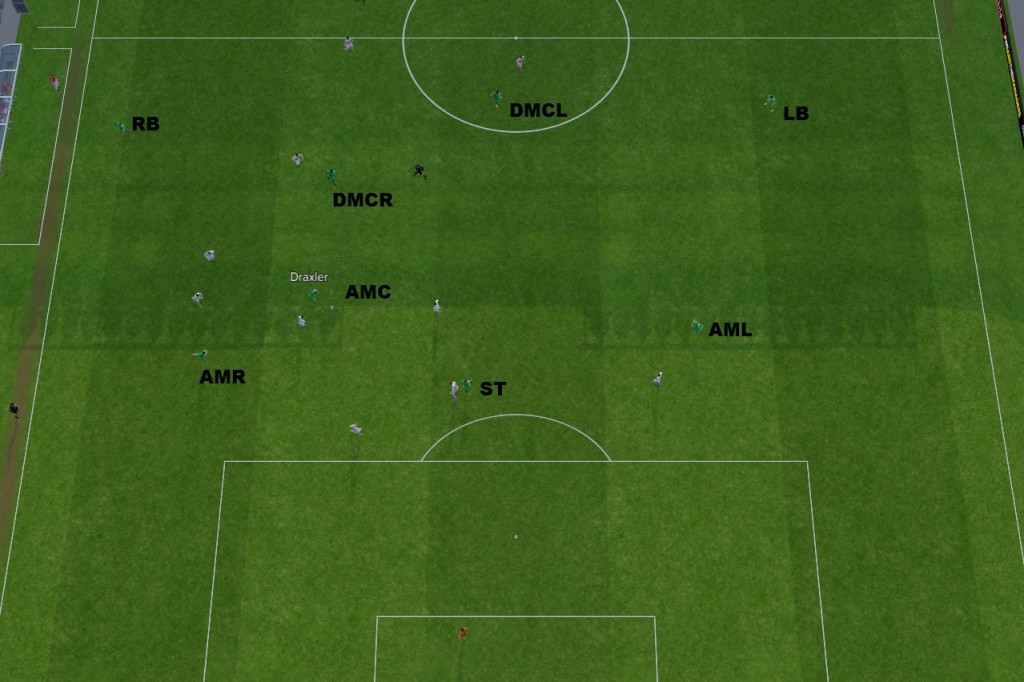 Here we see a much more positive attack that comes about via some deft trickery from Draxler as he picks up the ball wide right and drives towards the box. To be honest, this sort of behaviour was a rarity and his duty means he is content to stay behind the play and wait for others to move forward. The front three are in encouraging positions here as the AMR attacks the space behind the full back and the AML cuts in. Where this tactic really lacks though, is in the positioning of the left back. He is much too deep and narrow to help us stretch the defence and you would imagine the real Rodriguez to be positioned to Schürrle’s left creating a fatal overload on that side of the pitch against a defence which is already stretched. 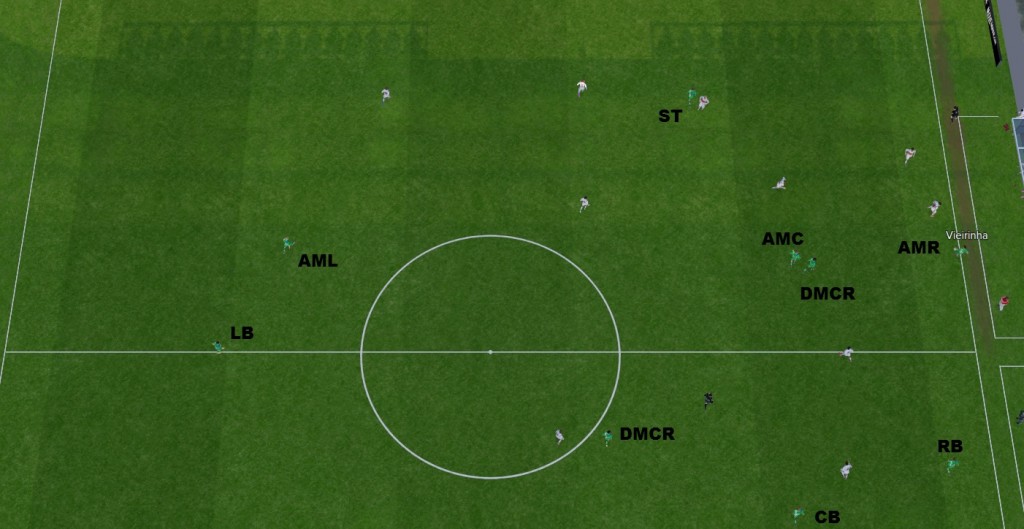 Finally, this screenshot illustrates the duty selection across midfield and how I feel it is both hindering our approach play and an inaccurate representation of the real Wolfsburg. Vierinha once again drives wide with the ball but the only player with any desire to create an opportunity is the striker who is looking to potentially beat the offside trap by running off the shoulder of a defender. The DMCR (a Defensive Midfielder on support duty) moves over to offer Vierinha a passing option which is sensible, but Draxler at AMC also moves over with the same intention meaning we are without close support to the forward. This right side bunching up is exacerbated by the positioning of the left side who are within 10 yards of each other and happy to stay behind the play. Should the AML drive inside and the LB move wide in support, we would have a fatal overload again and a chance to quickly switch the play.

Although the examples above are taken from the first game for convenience, the problems I saw were present in all of the first clutch of games. Apart from a crazy 2-0 defeat of Bayern (shades of that Gladbach match!), the general play has suffered in the final third. All in all, the tactic seems to be a bit anaemic and lacking a cutting edge, but the most important thing is creating a faithful rendition of Wolfsburg’s approach. After considering the analysis, I believe I can solve most of the issues with the following tweaks to the tactic: 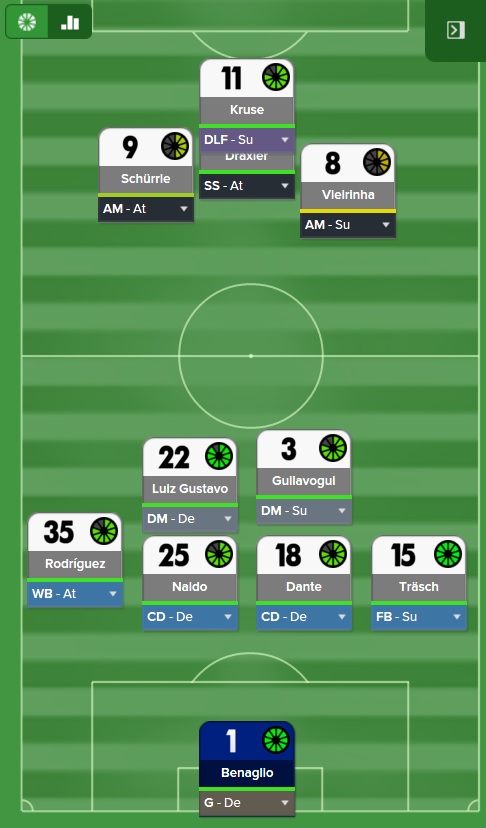 As you can see, it’s looking very different to the original tactic already with a distinct narrowness in the final third. Here’s a summary of the changes:

So after plenty of analysis and a raft changes, I find myself with what I hope is a more faithful, refined version of the Wolfsburg tactic. On paper it certainly seems representative of the football Die Wölfe have played recently, particularly the positioning of the players. There is probably more work to do though as I am not 100% sure on the roles and how they will blend. Rather than waffle on, I’ll save that discussion for the next article where I imagine the tactic will be refined further to give it a bit more balance. I already have a few ideas as to what may need tweaking and what may go wrong, so I’m sure this isn’t the end of the road!