Not every team needs a player capable of pulling all the strings – indeed, sometimes it’s better to have capable playmakers all over the park. But to win games you need to score goals, so at some point you start to rely on your players’ brains and feet to fashion chances, be it from a moment of magic or an overall plan coming to fruition. The best strategies normally contain a good blend of both with a well thought out structure/platform that allows certain players to provide the ingenuity needed to beat the opposition defence.

With my decision to mitigate my chosen formation’s weakness by locking down the centre, the vision was to create a relatively consistent platform that allows the two wide men to be a bit more loose in their role. I’m not letting them off the leash altogether, but the Wide Playmaker on the right will Roam From Position whereas his counterpart on the left will be given an attack duty to encourage him to take more risks, be this on the ball by trying riskier passes or off the ball by moving into more advanced positions. We’ll start this section of squad analysis by looking at the candidates for the playmaker role:

As with some previous screenshots I apologise for how busy this image is as there is a lot of information to take in, but even at a quick glance you can see that a couple of the players are of a higher quality to the other two – namely – the two Germans; Thomas Eisfeld and Marco Terrazzino.

Starting with Eisfeld, his current status in the 2. Bundesliga perhaps belies a career arc that showed much promise – with him training at youth level down the road in Dortmund before being signed by Arsenal in 2011 as an exciting prospect. At 22, the media’s touting of him as “the next Mesut Özil” is maybe a little over-the-top with most of his development years behind him, but there are certainly some very solid attributes that catch the eye. In terms of playmaking, a solid First Touch blends well with good Passing, Anticipation, Composure, Teamwork, Vision and top level movmenet off the ball to describe a player that should have no problem being at the heart of the team’s creativity. 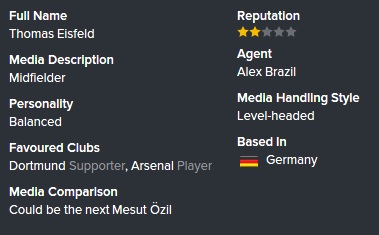 Marco Terrazzino is the second of the two lads that seem to look more the playmaker type and he comes with a technical ability that most Bundesliga teams would be pleased with. An experienced player in the top two leagues with stints at Hoffenheim, Karlsruhe and Freiburg – the native Baden-Württemburger left his region for the first time professionally last season to join VfL Bochum on a free. A mainstay in the squad last season, his Flair, Vision and two-footedness guides his technique to give him a creativity that will definitely be useful. As a pure playmaker, he perhaps loses out in mental ability to Eisfeld but I’m certain he will make plenty of appearances for us this season.

The other two options in this position are perhaps a bit more in the wildcard category as they lack in a couple of key attributes necessary to fulfil the role to a good enough standard. Selim Gündüz is actually some distance from being a good player at this level with an underdeveloped mental game meaning he may fail to make the best of otherwise decent technical ability; a rotation option at best.

As for Onur Bulut, he will certainly have a part to play when I require someone with a bit more bluster – perhaps as the oppositon tire or to give me a bit more bite in an otherwise floaty role. The native Bochumer is beloved by the fans and has plenty of positives such as his Aggression, top-class Work Rate, tireless physicality and awesome personality; a fantastic option to have around. The more I look at him, the more I can see him as a possible backup for the Wing Back position behind the playmaker and I will consider training him towards these ends.

As with the left defender, the left side of my midfield is where things get a little more complicated as I consider a variety of options for the attacking Wide Midfielder. A couple of the players discussed above as candidates for the Wide Playmaker role are definitely involved in the discussion, but the reappearance of a certain dutchman makes the decision somewhat more difficult. 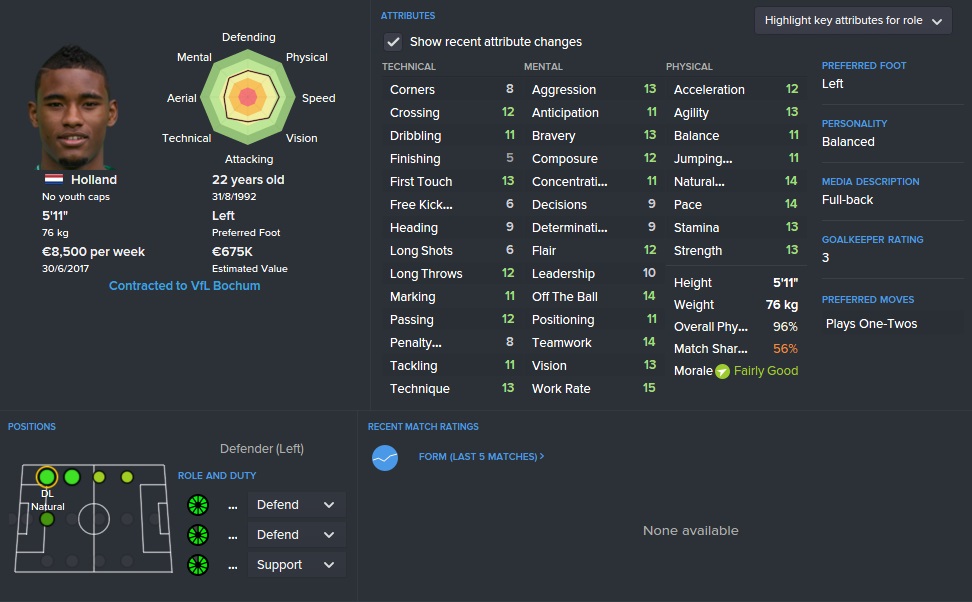 Although lacking the overall attacking ability of his older brother Georginio, Giliano Wijnaldum has such a well-rounded game that it’s hard not to consider him as a starter. He would need to be trained at left midfield to improve his effectiveness but his current rating as “competent” means he is by no means set up to perform poorly in this position. His speed and physicality will be very useful and it is only really his decision-making and poor personality that may let him down in the mental area. The PPM is also a decent attacking one and functions well with his attributes; he has the Technique, Passing and Vision to spot an opportunity to play the ball – then the Off The Ball, Pace and First Touch to receive the pass back to him. A decent set of defensive attributes mean he should also at least pay attention to his defensive duties when the opposition has the ball, with his top-class Work Rate carrying him backwards as well as forwards. Finally, his left-footedness is definitely a positive as I envisage this player mostly getting into space to play a forward pass or cross in the final third and on the left flank that will ideally be with his left peg. 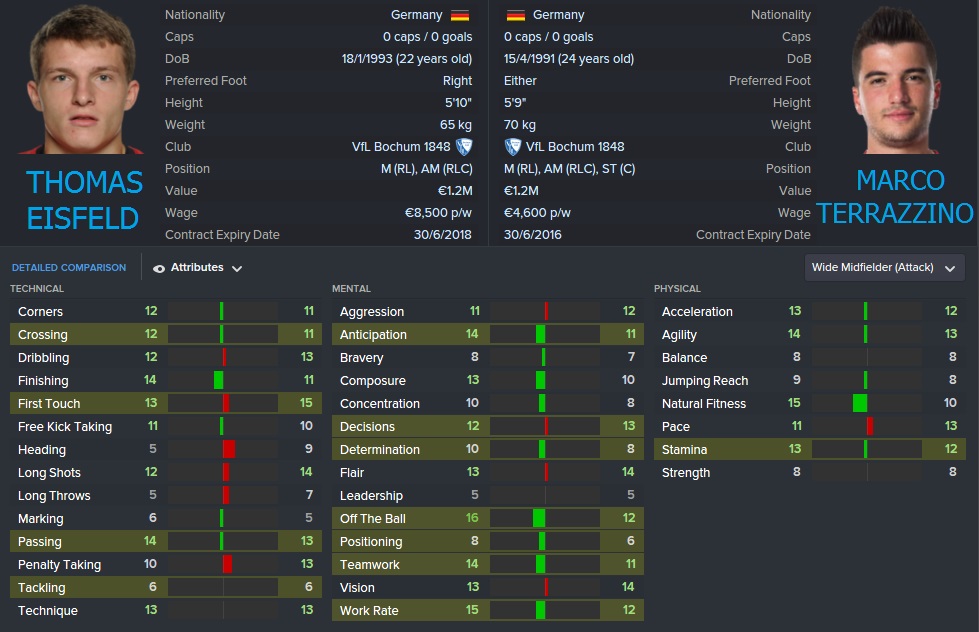 Moving on to the other candidates, we’re greeted by a couple of familiar faces; Eisfeld with his gormlessness and Terrazzino with his flirty grin (I’m sure the ladies love you, Marco). But I’m not interested in what they actually look like – like some sort of FM Rainman – I just want the numbers. In the screenshot above I have highlighted the reccommended attributes for a Wide Midifielder on attack duty mainly as a guide, but to be honest I was already aware that Eisfeld looked like the better attacking player; his Off The Ball is just fantastic and his Finishing may also come in handy. The former Arsenal man is only beaten by Terrazzino in his decision-making and with his First Touch – in all the other key categories, Eisfeld reigns supreme.

There is however a couple of further things that need to be considered when it comes to making a decision – the footednes of the players and their PPM’s. Terrazzino doesn’t have a preferred foot and is almost equally adept at using both feet whereas Eisfeld is right-footed with his left peg only rated as “reasonable”.

When you consider this along with his PPM Cuts Inside From Left Wing, you get the picture of a player who will be at times playing differently to how I envisaged the role being played. I want the WM(A) to give me width on the left side and Eisfeld may not be the best choice to consistently deliver this part of my tactical thinking. For this reason, he perhaps loses out narrowly to Wijnaldum and Terrazzino but he will still be considered as an option should I wish to overload the middle or add a bit of variety.

I guess that rounds things off quite nicely then, and the VfL Bochum faithful can mostly expect to see a combination of Eisfeld, Terrazzino and Wijnaldum out wide providing sparks that should hopefully set fires in the opposition defence.

In the next article I’ll be meeting what is traditionally considered the most exciting part of the squad – the forwards.