We left you with a tasty start for Diego Maradona in Naples with Serie A openers against Juventus and Roma. With new additions to the squad and a host of exciting attacking talent, could Diego guide his Napoli to the Scudetto for the first time in 29 years?

END_OF_DOCUMENT_TOKEN_TO_BE_REPLACED

As promised, I’ve now written a follow up blog. Funny how a new game coupled with enjoyment can spur someone on to put words on a page. In this post I’ll bring you up to speed with my progress (which is tough, believe me – playing at some rate of knots right now) and I’ll also give you a run down on the youth prospects at the club that I’m excited about, so much so that a little wee came out.

Now, I found this transfer window really, really frustrating. Usually I find pre-season one of the most enjoyable things about FM; the wheeling and dealing, transfer rumours, fighting to keep hold of your best players, scouring the world for unearthed gems and inevitably scrambling around to replace a player whose just stabbed you in the back now that a bigger club is sniffing around. It’s all a lot of fun…usually.

From finishing 4th in the previous season we were hopefully looking at qualifying into the Champions League group stages. With this in mind my squad needed more strength and depth. I had a few clubs sniffing around one or two of my players and alas I had to give in to AS Monaco when they faxed over a £28.5m bid for Mihailo Ristic, a £27m profit after one season. I was pretty gutted to lose him as he was fantastic on the left as my defensive winger, however his head had been turned by the luxury of life in Monaco and so I sanctioned the deal knowing full well I could use all those reddies for some sound reinvestment.

I had identified that the two key areas I needed to invest in were at GK and at ML now that Ristic was gone. I made the mistake of accepting the deal for Ristic without lining up a suitable successor – I have a chap called Bogosavac signed from Partizan the previous season who was ‘competent’ at best – but not on the same level as Ristic. I quickly found that there was no on his level to perform as I wanted, I considered retraining players with similar attributes but who weren’t natural left midfielders, wing backs, full backs, the lot – no bloody club bore any fruit and my scouts were so useless I banished them to scout in Greenland and cursing them the whole way there – it won’t surprise you that they failed to find a better keeper than Langerak too.

In the meantime I set about reinvesting some of that Ristic cash on players that I had found through my worldly travels. In came Rodrigo Bentancur of whom I am a long-term admirer (not in that way). He had many a great day with me at Stoke in FM16 so this was a no brainer at such a relatively small fee. He would come in and provide great competition for my two AM roles and even provide cover at MR & MC. Long term I want him to nail down the AP-S role at AMCR.

Zdenek Vesely & Daniel Horvath are two kids to watch out for, more on them soon.

Davinson Sanchez came in to replace my ageing captain Toni Sunjic at the heart of the defence & Cristian Pavon to make the SS role his own as alarm bells rang around Maxim’s recent performances. Luis Olivera from River was not a signing I necessarily wanted to make but I felt he was the best of a bad bunch of scouting reports to provide backup to the ML role.

Grobler was a dirt cheap, guaranteed profit making DC from South Africa…and finally Jose Laertes joined in January – 6 months too late for the keeper I wanted but alas I only found him at the end of November after a quick trip to Brazil for the World Beach Volleyball Championships. Some compromising photos and a bribe or two later and he was booked on the first flight out of Brazil in January. A much needed long-term upgrade in goal. More on him in my Youth Players blog post which I think we can all see, won’t be happening in this already 700 word post. 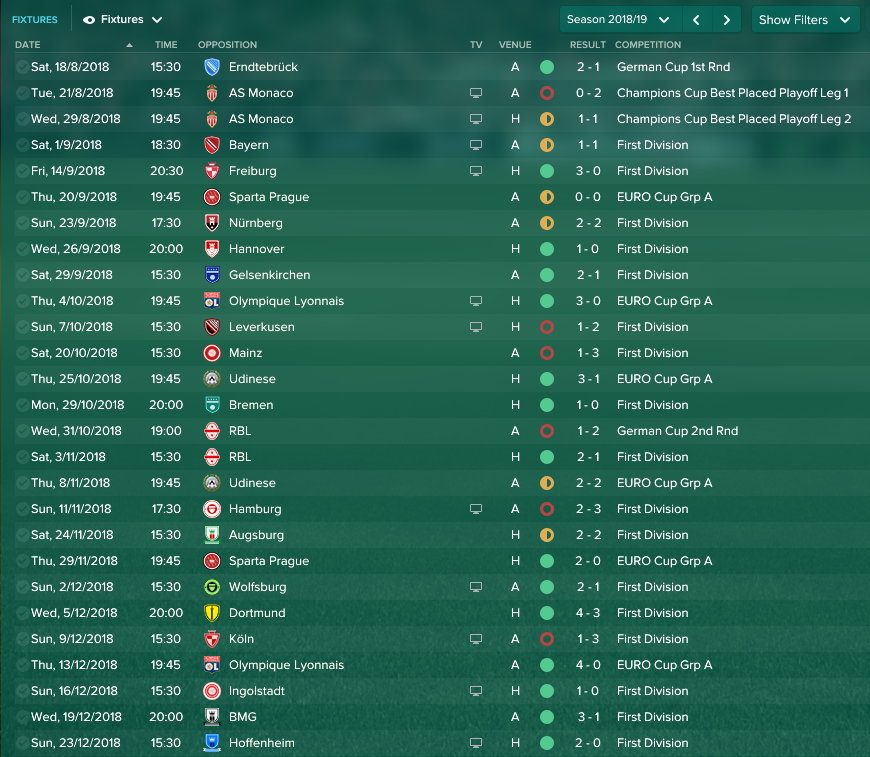 The season kicked off with as a bit of a mixed bag. I was pretty gutted to be drawn against a strong Monaco side in the Champions League qualifier and they ultimately proved too strong for me over two legs. It was a bit of a kick in the teeth but at least we could fall back on the Europa League on a bloody Thursday night.

A last minute screamer by Assombalonga salvaged a point away at Bayern to kick off the season, other notable wins included a 2-1 away win v Schalke & 4-3 home win v Dortmund. Our EL results were very positive and we comfortably topped our group. I particularly enjoyed our 4-0 drubbing of Lyon in France. 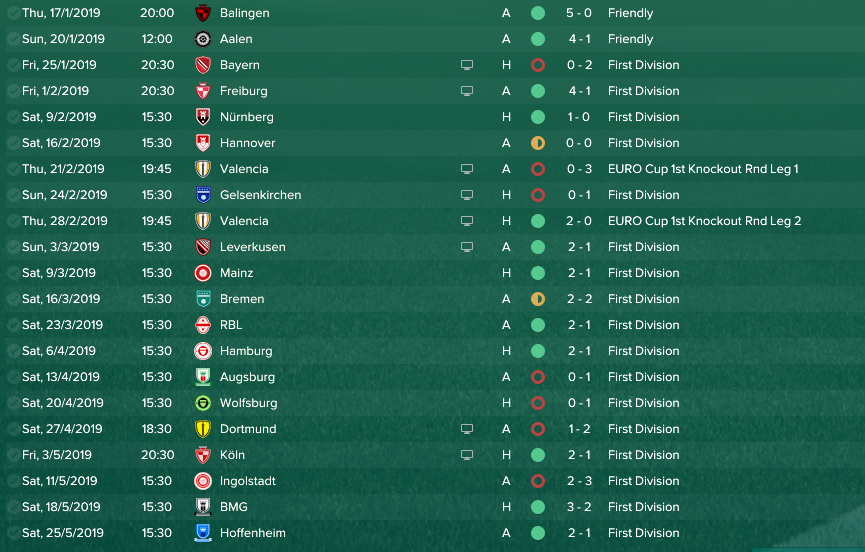 Before April came we were keeping pace with Leverkusen in 2nd place – especially after a cracking 2-1 win against them away from home which sparked a run of 4 wins in 5 games. However 3 defeats on the bounce before May saw us drop down to 6th albeit in very close proximity to the 3 teams above us – our title challenge had withered yet I knew we were some way from competing on that front.

An incredibly poor 3-0 away loss at the Mestalla meant we left ourselves with far too much to do in the return leg and a 2-0 victory was not enough to turn our fortunes. We wrapped up the league in a more positive fashion bagging 3 wins in our last 4 games to lift us into 4th place at the expense of Schalke who failed to win their final game. I was still pleased with our table finish knowing that we had another shot at Champions League football next season…

…except we don’t do we? FFS the bloody co-efficient. Though going on the results in Europe of the past few seasons – I can’t really see how this is possible, but there you have it. Italy currently have the 4th Champions League spot – the bastardo’s!

It was another enjoyable season where we performed slightly above expectations again, the aim has to be to kick on and nail down a Champions League spot next season and in the meantime – go as far as we can in the Europa League next season.

Watch out for my next update on the wonderkids of Stuttgart as well as summer of transfer madness.