We left you with a tasty start for Diego Maradona in Naples with Serie A openers against Juventus and Roma. With new additions to the squad and a host of exciting attacking talent, could Diego guide his Napoli to the Scudetto for the first time in 29 years?

Things didn’t quite go to plan at first. Diego’s Napoli lost their opening match against Juventus (3-4) before drawing at home to Roma. His first win back with Partenopei came against Palermo, with Mahmoud Dahoud grabbing a 90th minute winner.

After a 4-2 loss away to Milan, October and November proved successful for the club legend, with just the one loss in 7 games. Napoli wouldn’t lose again until February, a 3-0 humiliation at the hands of Roma, but would end the season with a bang. Diego’s men would not lose a game again all season, with the highlights being a 4-3 win over Inter, a 5-0 defeat of Atalanta and the final day win against Chievo (3-2), which would secure Maradona and Napoli the league title. 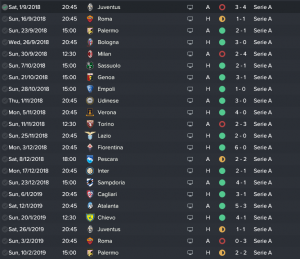 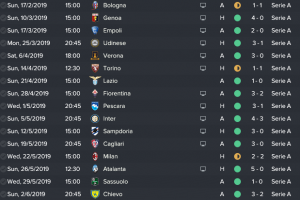 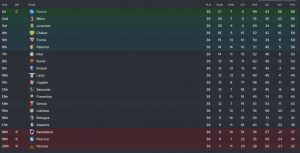 Success in the league followed with triumph in the Copa Italia, where Napoli defeated Milan, Juventus and Inter Milan to the trophy.

In the final, against the Nerazzurri, Maradona’s men were truly at their best. Despite falling behind after just 7 minutes to a Joao Mario goal, the Neopolitans dominated. A brace from Lorenzo Insigne, coupled with goals from Hamsik, Mertens and Bernardeschi, led Maradona to a 5-1 victory in the final. The double had been achieved.

After a 4th place finish last year under Sarri, Napoli had qualified for the Europa League. They were drawn in group B, alongside Ludogorets, Slovan Liberec and RB Leipzig. They progressed undefeated, with Leipzig the only team to take any points off Maradona’s men (3-3 draw).

In the first knockout round, French club St Etienne awaited. A 2-1 win away from home was followed up by a 2-0 home win, goals coming from Divock Origi and Allan, taking Maradona through to the second knockout round.

Rapid Wien awaited but proved no competition for the attacking prowess of the Partenopei. A Marek Hamsik brace and goals from Origi and Jose Callejon gave us a 4-0 lead at home in the first leg. The second leg was followed up by an equally dominant win; 3-0, goals from Origi, Bernardeschi and Allan.

So onto the Quarter Finals. Bayer Leverkusen were the opposition and Maradona’s Napoli suffered their first defeat in the Europa League so far with a 3-1 loss away from home in the first leg. A Divock Origi masterclass, in which the on-loan Arsenal striker scored two, led the men from the South of Italy to a 3-0 win, 4-3 on aggregate, and a space in the semi-finals of the tournament.

We faced AS Monaco. After a 0-0 draw at home in the first-leg, Maradona’s Napoli slumped out of the tournament with a 2-1 loss in France.

What a season we had in Naples. Diego Maradona and Napoli. They’re meant to go together.

In the transfer market, there’s still room for improvements. With Pepe Reina retiring and Rafael leaving on a free, we’ll need a new back up for Mattia Perrin. I’m also keen to add a bit more firepower, with Divock Origi heading back to Arsenal.

Who knows what next season will bring, but with Diego, it’s always going to be fun.