Following the epic 100 hour plus save that I kickstarted Football Manager 2016 with, I’ve struggled to find the motivation to find managerial pastures new. An ill guided attempt to turn Sevilla into a strikerless force aside, it’s proven tricky to find a team I’m interested in investing my time into.

However, a suggestion from Occasional FM to look into ending the Gutmann curse at Benfica piqued my interest. So, after studying the league and the players I potentially had available to me, I decided to dive in headfirst and attempt to end years of European heartbreak.

Benfica is a bit of a dream team for most Football Manager players. Boasting a relatively decent squad filled with talented youngsters, there was enough from an initial scan of the first eleven to suggest there is a decent project at hand here.

After examining the side, I decided that I wanted to play a 4-3-3 with two out and out wingers. These are the reasons why:

So to begin with, I set the side up in the most basic shape I possible could. The back four featured two regulation centre backs, a right full back with a support duty and a left wing back with a defend duty. The midfield featured a Ball Winning Midfielder in the DM role, a box to box midfielder and a centre midfielder on support. And the front line consisted of a right winger with a support duty, a left winger with attack duty and a target man on support.

In the opening fixtures of pre-season, I set up no tactical instructions or set piece instructions. The reason for this is that I like to see how my tactic performs in the purest sense possible before fine tuning it, to ensure I’m not building a tactical approach which rests on uneasy foundations.

The early fixtures in pre-season were far from challenging. In each of the first three fixtures of the season, against my reserves and two lower league sides, we recorded over 22 shots in each of them.

However, in two of the games where we generated over 30 shots we only created one clear cut chance – the 2-0 win over Benfica under 19s and the 3-0 win against. 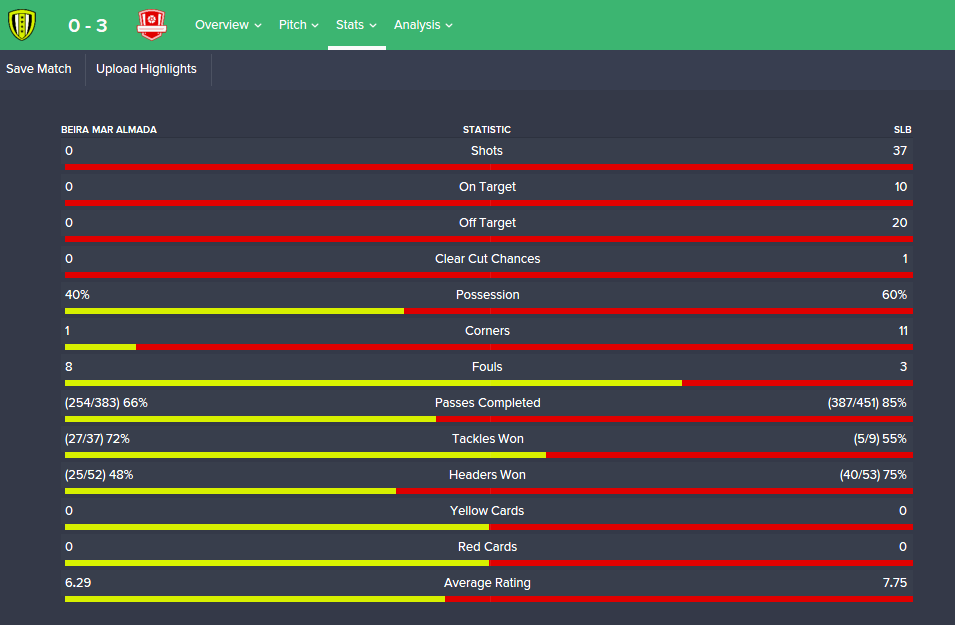 The first change I made, therefore, was changing the left sided centre mid support role to advanced playmaker and brought in Talisca alongside Renato Sanches; a move that resulted in four clear cut chances in the next game from 22 shows.

Three games into the season and I still hadn’t given any tactical instructions for my side. We were still playing a 4-3-3 with mentality set to standard and a flexible team structure.

The next two games, however, changed that. The first game was the only real measure of the quality of the side through pre-season, which was a 1-1 draw against Napoli. I had been watching the games on extended highlights until this one, but I switched to comprehensive because I felt that I’d get a much better measure of what my tactic was like in this match.

In the game, a few things stood out:

Backed up further by an unimpressive 2-0 win against Benfica B in the following match, where a midfield without Sanches and Otavio struggled to create anything of note in the first half, I made a few further shifts to the tactic including: changing the target man support role to a complete forward support role; instructing the centre backs and keeper to play it short out of the back; to change the advanced playmaker to a roaming playmaker; to instruct Otavio as a box to box midfielder to dribble and shoot more in an effort to punch through the opposition ranks. 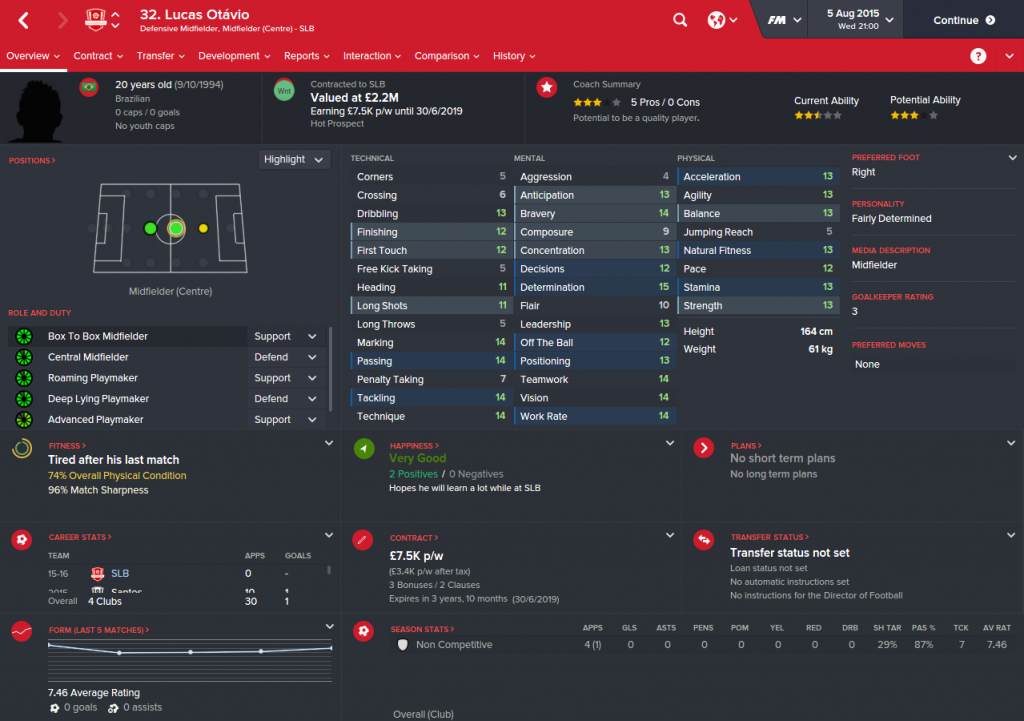 Though he needs to improve his composure, Otavio will hopefully be able to develop into a fine goalscorer

Allied to an increased focus on creating attacking set pieces, which suits this current Benfica side due to the quality of their centre backs in the air, we rounded off pre-season by thumping Athletico CP 5-0.

So at the end of pre-season, and just ahead of a super cup tie against Sporting Lisbon, this is how my side will be lining up tactically. 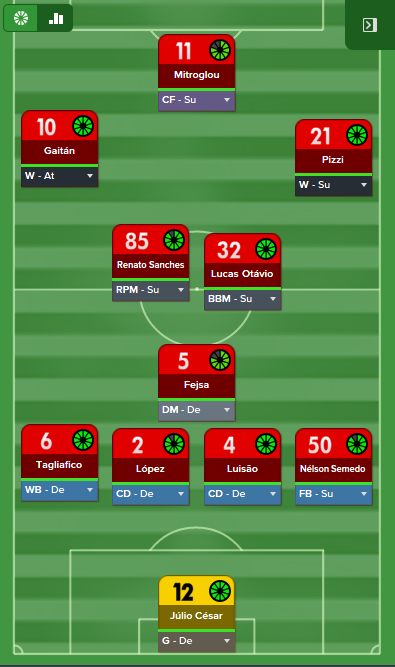 And though I’m not really sure how it’ll perform when we play quality opposition, there are a few things I’m looking out for in the coming weeks: 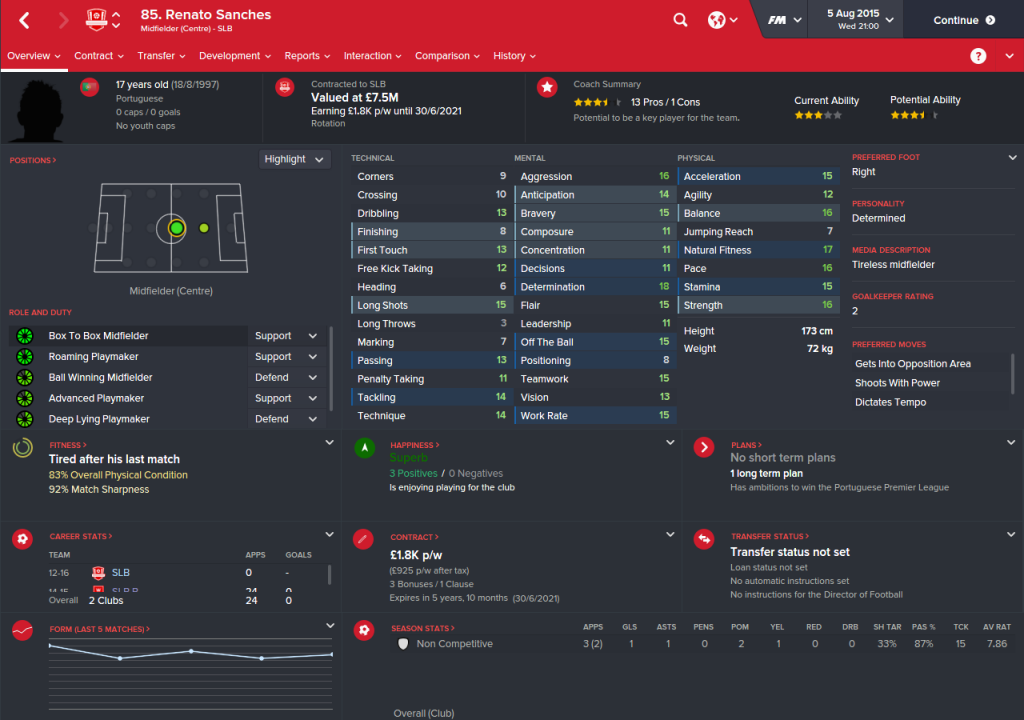 The great hope for Benfica’s future

That’s it from this update. Stay tuned for another update when I’m a month or two into the season to see how things go.