Although often overlooked by many, getting together a functioning backroom staff that match your overall plan can be very rewarding. We may only be talking a 5-10% increases in coaching efficiency, tactical familiarity, team blend and squad personality (to use some examples) but in terms of player development, that could be the difference between having a good player and a world-class player. As discussed in the previous article, player development will be an important part of my philosophy at Bochum so when I start-up my search, I’m looking for excellent coaching ability first and foremost. I also look at their personality, history and age as well as key attributes for each role to make sure I secure staff that will be around long enough to improve themselves and rub off on the lads coming through.

The most logical place to start of course is with my assistant. I’m not concerned about tactical/squad/team talk advice, so I simply look for a guy that is a solid coach, but who is also a half decent judge of ability should I need an insight into my players’ hidden attributes. After trawling through several options, Thierry Uvenard is the best I can find right now and he comes with a good personality and a wealth of experience having been a player, coach, assistant, manager and director at Le Havre FC (incredible) before spending 7 years as assistant manager at Toulouse in Ligue 1. It’s always nice to feel like you are hiring above your level.

To accompany him are Dariusz Wosz (the only survivor of the old regime and a former player for Bochum), Patrick Weiser, Mourad Hdiouad, Geir Kasene as fitness coach and Uwe Bandemann – rehired after being sacked by the last regime – as goalkeeping coach. Completing the roster is the poached Matthias Heidrich as Head of Youth Development who is relatively young but with as keen an eye as I can find for potential in youngsters. None of them quite have the all-encompassing experience of Thierry Uvenard, but they have good personalities, good qualifications and are mostly young enough to improve themselves.

I won’t include individual screenshots of the entire backroom team but these two screenshots show that I’ve focused my attention on the core mental attributes that make a coach worth more than his weight in salt – as well as how much I’ve improved the club’s coaches in each training category. Overall they’re a determined, professional and experienced group that will hopefully drag the lads to top training performances and solid attribute growth over the course of the next few seasons. If I can’t get into the Bundesliga this year, I have to at least get the foundations in place so that the team have grown for the next campaign.

Talking about foundations, I also restructure the Under 19’s setup with the exact same philosophy, focusing on the best coaching attributes I possibly can whilst also being aware of their ability to work with youngsters. Personality is massive here too as regen players will often adopt personalities from your backroom staff, so I stock up on determined and professional chaps that will show the young lads in Bochum how not to become Mario Balotelli. That said, the Italian enfant terrible would be a dream to have in my current squad (more on them in the next few articles).

We can see from the screenshot that the U19’s don’t get as dramatic an increase in the overall quality of coaching but – as discussed above – personality is key here as I look for my youth players to follow the example of their mentors and save me having to tutor them wherever possible.

The final bits of housekeeping centre around the medical and scouting department, where the hiring game is much more simple; I don’t worry too much about personality here unless they have a negative one. First up, I offer my Director of Football a contract termination and a hefty payout (300,000€) that seems eye-watering but is significantly less than what we’d pay him to stick around for the season. It’s a no-brainer for me because I honestly don’t see the point in having him around when my only use for him would be to flog unwanted players. Off he drives to pastures new in his new Porsche (presumably doing 200km/h on the Autobahn).

In the medical department, Physios are always simple enough to hire; others may have a different outlook but I literally only look at the Physiotherapy attribute. As for scouts, adaptability and determination are always useful additions to the obvious attributes and I usually favour an older, more experienced bloke as my Chief Scout. Boy did I find one this time. Step up, Stephane Pauwels.

Not only are his core scouting attributes fantastic, he’s got high adaptability and determination meaning he has no problems getting his job done when I send him to Taiwan, Peru and Macedonia in the same month.

My favourite thing about him though is his background and experience (I did a little internet research). Starting out as a journalist and radio presenter, he got himself a position on the board of his local team – Excelsior Mouscron. In his time there, he oversaw their rise into the top division in Belgium, before landing himself a directorial role at LOSC Lille. Whilst in Lille, Pauwels was part of a team that brought through Eric Abidal, Pascal Cygan, Jean Makoun and the Cheyrou brothers before a brief stint as a tehnical director with the Algerian FA cemented his growing reputation as having an eye for talent.

In the intervening decade, he has worked for La Louviere, FC Metz, AS Monaco and Valenciennes FC (mostly in a scouting role) spotting the likes of Peter Odemwingie, Demba Ba, Dieumerci Mbokani, Yannick Ferreira Carrasco, Simon Kjaer and Gervinho.

Not a bad list of players to have to your name, eh? I’m certainly hoping his virtual avatar can do as good a job for us at VfL Bochum, even if he will be mainly reduced to giving me second opinions on young players due to his very high Judging Player Potential attribute.

The 100% last thing I always do before starting pre-season is to set up my training and I make it incredibly simple. Firstly, I select as much match training as possible with focus set to tactics so they learn it in time for the season start. I then set general focus to team cohesion should I find myself with a few random general training days but for the most part I space the friendlies so it’s tactics, tactics, tactics. Finally I schedule a rest after each match to minimise the risk of injury and at least give the players a bit of a break. Individual training is left alone until the players are in good physical shape to perform well in training and competitive matches (usually by the first or second league fixture of the season). 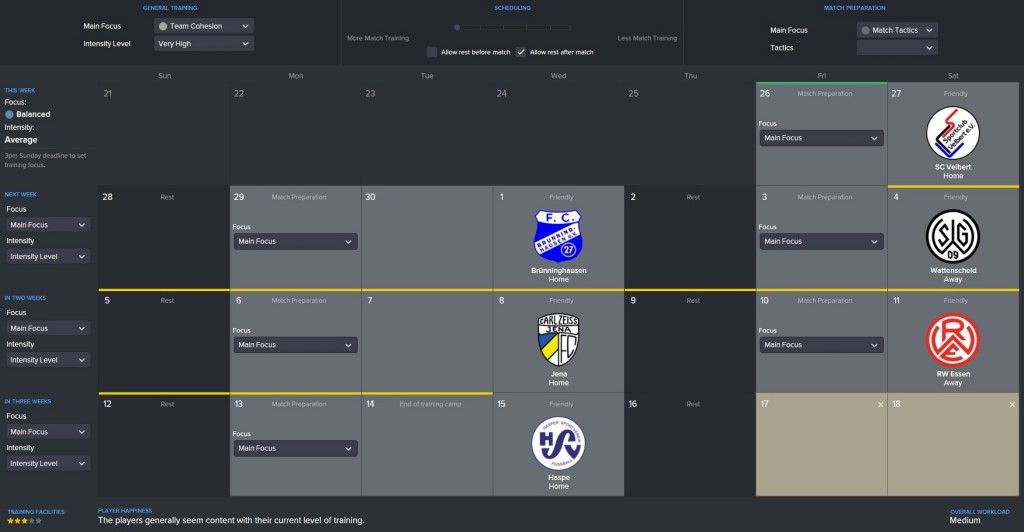 This pre-season isn’t as well organised as I would’ve hoped due to me not being able to cancel the friendlies against Wattenscheid and Essen, but I’m still focusing fully on tactics with a little bit of team cohesion towards the end before my first league fixture.

So my feet are well and truly under the table and I’m starting to sculpt the club in my own image via tactics, staff recruitment and a pre-season training plan. With the backroom now in place, it allows me to be more focused on the squad, tactics and matches without worrying if there’s something behind the scenes that I have missed and that could have an adverse effect.  Roll on the 26th July when the 2. Bundesliga kicks off and we hope to click into gear from the off against SC Paderborn!

In the next article, I’ll be starting to run a fine tooth-comb over the squad and how they fit into my tactical vision. Maybe Thierry Uvenard has already got me the next Pascal Cygan sat in the reserves.