So I now sit here in the summer of 2024, in my first installment I caught you all up on the brief history of my time at Stoke. Since then the 2023/24 season has ended and Stoke have gone on to retain their Premier League title for the 5th consecutive season (gutted there was no Steam achievement) & also stormed back to win the Champions League after a 4-3 win over Arsenal (who I also pipped to the title by 3 points). All in all, the Stoke train keeps on rolling.

A big reason for our success is our 4-4-1-1 system that I’ll delve into in this piece. I’ll firstly say a big thanks to Jonathan Aspey (@JLAspey) as it was after his success at Newcastle with his 4-4-1-1 that formed the foundations of Stoke’s success.

So let’s look at the basic structure of the system, instructions & then plenty of in-game analysis will follow over the coming weeks. 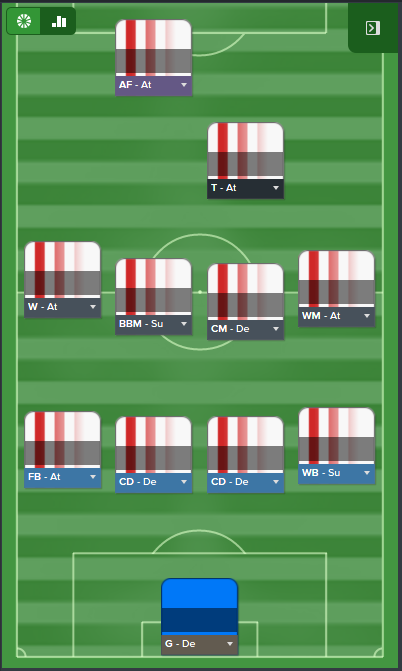 A pretty straight forward set-up. The idea behind my system is to dominate the flanks whilst having plenty of support in the box to aim at. Coupled with my instructions I want to be incredible on the counter attack, press high, have good and meaningful possession (not possession for possessions sake) and most importantly – clinical. Let’s summarise how I expect each role to play out:-

– Goalkeeper – Set to the default setting – all I’ve asked is for him to distribute to our full backs; this way I hope to utilise the wings as early as possible whilst also opening up vertical passing alleys to the central midfielders.
– Full Backs – Fewer Risky Passes & Sit Narrower, the passes instructions speaks for itself, I don’t want him to be wasteful in possession or look to play too long & direct. Sitting narrower may seem a little ambiguous but it’s effective; in defence he will not so easily allow a wide man to cut inside and shoot or play a through ball, in attack he dovetails well with the W/WM – often starting in a different, more narrow channel than the winger allowing him to underlap, provide a passing option AND overlap where the winger is either forced or dribbles inside.
– Central Defenders – no frills, no spills, be solid defenders, keep it simple, break up attacks, mark the forwards etc…in practice if I can also have centre backs who are confident on the ball and can distribute well – then fantastic. Otherwise, just play it simple to those who can do it better.
– Right Midfielder – a lot of people will ask why this chap isn’t set to a winger, the main man I use there (Jevdjovic) is a perfect winger, not necessarily a wide midfielder. The answer is, mostly, balance. I find his starting/defensive positions are far better, he will occasionally sit narrow allowing the wing back to support, however I also want him to be a winger so I also require him to Shoot Less Often (not unnecessary shots from stupid angles, ideally!) , Dribble More, Roam From Position & Cross From Byline – and boy, there aren’t many better than Jevdjovic at crossing from the byline.
– CM-D – the midfield needs balance and can’t be too gung-ho – this chap is there to shore things up in transition but also be a key cog in our build-up play, always offering a passing outlet when possession needs recycling from side-to-side, something we do extremely well.
– BBM-S – arguably the most important player in the team. He needs to support both in attack and defence, so just has to be a fantastic all round player. Lucas Romero made this position his own.
– Left Wing – other than also asking him to Shoot Less Often (wide men do it far too much), all I want this player to do is give the opposition full back absolute hell. Raid that wing, get the ball in the box and also support attacks from the opposite wing.
– Trequartista (AMCR) – this position is lob-sided to the right to allow the BBM to break into free space ahead of him and also allow the striker to drop off without the AM-strata becoming congested. I want this player to always provide a passing option between the lines, look to play in the striker and also be someone who can score plenty of goals himself when presented with the opportunity.
– Striker – get me goals, goals, goals. Get on the end of all those crosses and be the one to take all the glory. I want this player to be quick, able to beat a man & most importantly, clinical. He’s also the first line of defence and a high work rate to close down the defence and block passing channels, forcing them to play long is key in allowing us to strangle possession.

As you can see, setting player roles shouldn’t just be something you do idly, each should have their place within the tactic as a whole – just like the instructions above.

– Mentality – Control – I want to be concise in possession and also look to dominate weaker teams, we’ll take slightly more risks and the full backs will often look to overlap. I know that we will be susceptible to counter attacks – but the goal is for my attacks not to break down and result in a goal 🙂
Team Shape – Very Fluid – this will allow my players to break out of a strict 4-4-1-1 setup to press the ball, close down channels whilst also roaming from their position to provide passing angles & allow for high creativity in our passing. It also ensures all of my team contribute to defending. Winning the ball back as quickly as we can is important to me.
– Shorter Passing – don’t hoof it long boys, be visionary, make good decisions and build the attack concisely
– Pass Into Space – I like to think that this instruction coupled with my other ones means that we’ll only do this when the pass into space is our best option and not just an aimless hoof into space.
– Play Out of Defence – again, shorter passing is encouraged, I don’t (usually) use a target man so long balls aren’t going to be successful
– Exploit the Flanks – we want to utilise our wide men and whip those crosses in, over and over again
– Much Higher Defensive Line – encouraging our high press and forcing more of the play into the oppositions half of the pitch
– Close Down Much More – press players, close down channels, win the ball back as soon as possible
– Prevent Short GK Distribution – another instruction that encourages the opposition to play long and preventing build-up play. I’d be much more happier with their GK lumping it onto the heads of my defenders then moving my players out of position with short build-up play 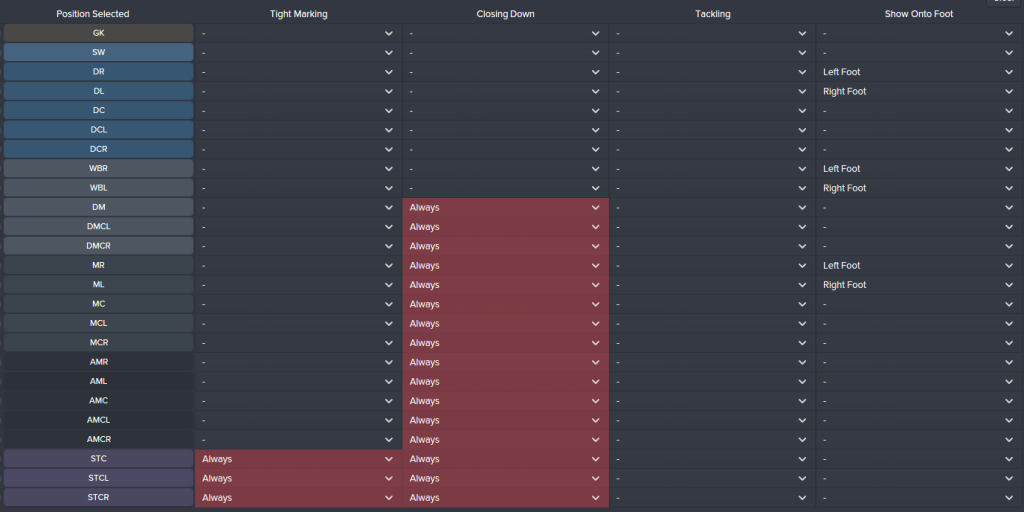 Often overlooked but bloody important. As if telling my team to press & close down more wasn’t enough – I’m reminding them again. I want my defenders not to let their attackers out of their sight. I always want to close down their ball players and if I can force their full backs and wide midfielders inside then I can congest the pitch and hopefully turnover possession. I will also look at the opposition and ensure that strikers are shown onto their weaker foot. With players in the opposition AMC strata I will look at their system and see if they play wingers or inside fowards, it’s important to discover this as you may want to force inside fowards wide & wingers inside – and this can change from player to play, tactic to tactic, team to team.

I hope you’re still with me and have found the above insight interesting – and I know what you’re thinking – you want to see how this all works in practice. Well, conscious of my word count and the fact only half of you may have read this far, never fear – that’s coming next. Some key match analysis will follow next week where we’ll see how the instructions and player roles come to life on the pitch and all contribute to our success.