Seville. Diego Maradona is not meant to succeed in Seville, it seems. A failure as a player and a failure as a manager.

After 6 months without a job, I was approached by Napoli – the club where Diego Maradona as adored for so long. I may have left under slightly tense relationships but now I’m back and ready to restore the love the people of Naples have for me.

On a whole, the squad is very strong. Star attackers such as Marek Hamsik and Lorenzo Insigne are joined by solid defenders like Kalidou Koulibaly. Even before making any improvements, the squad is good enough to secure Champions League qualification. Despite this, they only managed to qualify for the Europa League last year, which cost Maurizio Sarri his job.

There’s some solid defenders in the squad. The aforementioned Koulibaly is one of the league’s best defenders, whilst Elseid Hysaj is a top right-back. There’s a Faouzi Ghoulam left the club during season 1 and was never really replaced. That will be an area of concern for me.

The club’s other defenders; Raul Albiol, Vlad Chiriches and Nikola Maksimovic are all good defenders, but are back-up at best.

Little need for improvement, but some more young talent to eventually replace the ageing Callejon, Mertens and Hamsik is required.

Being honest, there’s not enough quality here. Arkadiusz Milik is our best striker, but back-ups Leandro Pavoletti and Duvan Zapata aren’t good enough if we want to reach the level we’re aiming for.

The summer was busy, with 17 players leaving the club. Despite being separated from Monchi, I’m still operating with the same recruitment method as in Seville. Buy low, sell high is the aim, wherever possible.

Steven N’Zonzi was out of the doors early on – the second time I have sold him in this save. He joined Manchester City for £34 million, an £11mil profit in just one year for the 30-year-old. Also leaving was Roque Mesa, who joined AC Milan for £15mil (£6.5m profit).

Duvan Zapata (£5.5m) and Pavoletti (£5.25m) also left, whilst Alberto Grassi brought in a nice £8.5m from Sassuolo. The summer’s big departure was striker Milik, who kicked up a fuss and moaned constantly about his need to move to a bigger club. That bigger club? RB Leipzig. 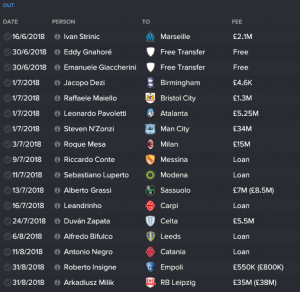 The first recruit was Mahmoud Dahoud, the German central midfielder, who joined on a free transfer after his Gladbach contract expired. He will learn from Marek Hamsik and will one day replace him.

Next was PSG left-back Layvin Kurzawa, who was transfer listed at £10.25m. He’s a top class left-back and will slot straight into our starting XI.

Looking at Serie A, Mattia Perin (£6.25m) and Edoardo Goldaniga (£10.75m) joined to strengthen us in the back 5. Also joining was Federico Bernardeschi also joined from Fiorentina for £21m (rising to £24m) with the view to replacing Callejon & Mertens as one of our attackers in a few years time. Also taking up that mantle will be Cristian Pavon, who joined from Boca for £5.75m.

The only priority which was left unaddressed was a striker, with a void after Milik had joined RB Leipzig. I was struggling to get the striker that I wanted, so on transfer deadline day Divock Origi joined on loan from Arsenal for the season. 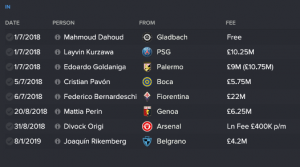 Our pre-season started off poorly, a 1-0 loss to Anderlecht. We soon picked up after that, though. A 6-2 win against FC Kobenhavn set the tempo early on, followed by a 4-0 win away to Toulouse. Lyon were dispatched 1-0, before we drew 1-1 to Karlsruhe.

Trento (9-0), Nizza (13-0) and Chievo (4-0) were all dispatched easily, before we beat Slovan Bratislava 5-0 in skipper Marek Hamsik’s testimonial.

Overall, I couldn’t have asked for a better pre-season, despite the early loss. We scored plenty of goals and conceded few. I’m not taking anything for granted, though, as my first pre-season with Sevilla went perfectly before we collapsed in competitive action…

The start of competitive action