First of all, hello and Guten Tag. I’m Felley and I think I have just written the most hipster-titled article of all time.

As for the actual content, I have been entrusted – if that’s the right word – by Ed and George to recreate some real life tactics in the marvellous game that is Football Manager. Based in Germany, I’ve been slowly absorbing the football culture like a sort of travelling nerdy sponge. Spending afternoons soaking in both the kitschy, wheat beer fuelled discussion on Sport1 and training with a local non-league side on a sodden, sandy Aschenplatz, one quickly learns the value the Germans place on football intelligence – both on and off the pitch. It is against this backdrop that I am writing my first batch of articles for The Deep Lying Podcast as I look to recreate the tactics of the Bundesliga. In the first of what will hopefully be a long and fulfilling series, I’ll be taking a look at Borussia Mönchengladbach, recreating their playing style and looking at their recent tactical exploits…

To start with, a bit of back story wouldn’t go amiss, so… Gladbach are a well-known and well-loved team in Germany, only really drawing fierce dislike from 1.FC Köln fans. They are remembered for the rivalry they fought with Bayern in the 70’s and their successes in this “golden decade” wherein they won 5 league titles, a DFB-Pokal (German FA Cup) and 2 UEFA cups. Since the mid 80’s, the record has been more mixed as financial issues and relegation (both in 1999 and 2007) contrast with a generally successful youth system, the 1995 DFB-Pokal win and the opening of the 54,057 capacity Borussia Park in 2004 – a top quality modern stadium.

In recent years under the tutelage of Lucien Favre, Die Fohlen have become famous for playing a counter-attacking 4-4-2 with pace out wide and creative forwards, it was at it’s most effective last season (2014-15) where it fired them to 3rd place. After a problematic start to the current season, Favre walked out, with Gladbach’s results improving dramatically afterwards. Their style has remained roughly the same since his departure with new manager Andre Schubert only starting to develop his own method in the last game or two. It is therefore Lucien Favre’s Gladbach that I will be looking to recreate…

There’s only really one place to start and that’s with a 4-4-2 loaded up in FM’s tactics creator and armed with a list of analysis articles and stats to add flesh to the bones of the formation. I shall spare you all a long-winded analysis and we’ll start with a list of key propensities of their playing style:

– They prefer a cautious, possession orientated approach with relatively short average passing length.
– The team will look to frustrate the opposition by absorbing pressure with good defensive positioning and a deeper form of gegenpressing that attempts to channel the play out wide to the touch-line.
– The main attacking impetus is expected to come from the flanks.
– Both forwards are expected to drop deep and help carve out chances as well as finishing them, swapping positions with each other in the process.
– Due to the team’s deep overall positioning, they are not afraid of a through ball for one of their faster forwards/wide men to run onto.

As well as this textual summary, I will borrow some base formations from spielvelagerung.de to inform the choice of roles. We can see here a summary of Die Fohlen’s positioning against Hannover late last season (2014-15) and Augsburg a few weeks ago (2015-16): 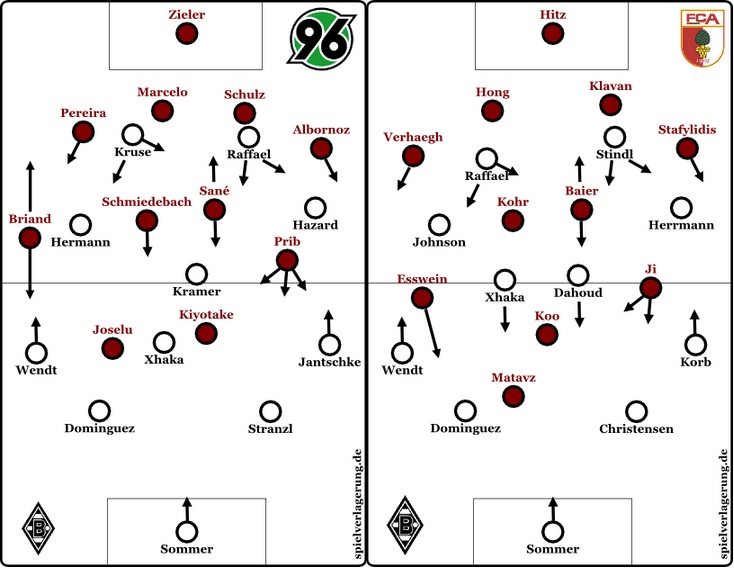 What this shows us is that Gladbach like both full backs to get forward in support, but crucially, not high enough to overlap too often. The wide midfielders are expected to cover the area from the touch-line to attacking midfield as they press both opposition full backs and defensive midfielders. Both strikers are shown to be dropping off the front line and contributing to the build-up in front of the defence. The final key point is that both central midfielders are expected to sit fairly deep, with Xhaka particularly deep in the Hannover game. The central players exist more as a screen for the defence and as options to build play from deep areas, rather than offering close support to the forwards.

TRANSLATING IT INTO FM

As I narrow down what I have discovered into a working idea, it’s good to start playing around with the FM tactics creator to see what settings I can use to recreate Gladbach’s style. After a bit of fiddling around trying to create some balance, I end up with this: 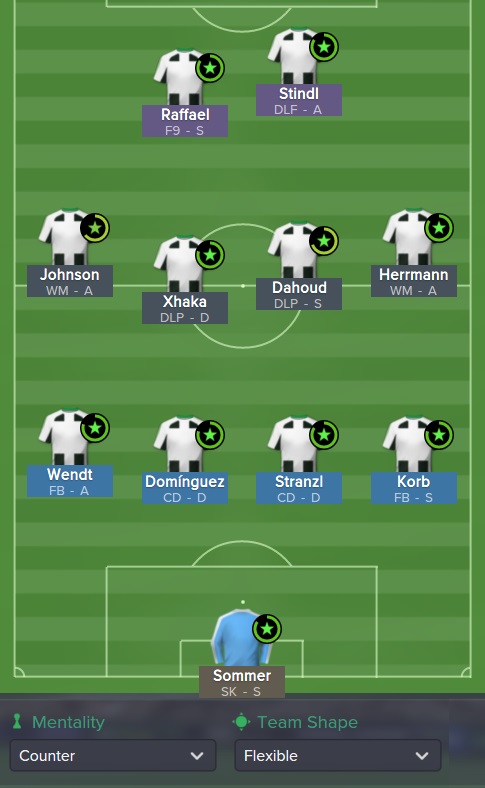 The mentality and team shape are self-explanatory for Die Fohlen. The counter mentality encourages a deeper, more cautious style with explosive breaks whereas the flexible team shape gives the tactic a balance between solidity and creativity.

The Back Five
– Sommer is the archetypal Sweeper Keeper and has some great distribution, straying out of the box to support his defence in possession. A support duty should give the right balance here.
– The central pair are simply expected to control possession and protect the box. Central Defenders on defend duty seems to be the right choice.
– The wide defenders are relatively conservative, expected to join in with pressing on the flanks, but rarely taking too many risks going forward. I’ve chosen Full Backs, with the left side a little more attacking so he gets an attack duty.

The Front Six
– In the centre of the park, both midfielders operate fairly deep, forming a partnership with the defence that allows them to retain possession and offer protection simultaneously. I have opted for two Deep Lying Playmakers to start with, one with more defensive responsibilities than the other.
– The wide men are expected to have lots of energy in this system, pressing aggressively and providing an outlet in attack. The link up with the forward line will be crucial, but they are not expected to stick to the touch-line so a classic Winger is out of the question. Wide Midfielders on attack duty are the order of the day.
– As for the forwards, dropping off the front is the key tenet of their play, with one of them always more likely to link up in attacking midfield areas. A False 9 should provide the link up and a bit of flair, whilst a more traditional Deep Lying Forward will give us an attacking outlet and something to aim for.

TUNING THE SYSTEM WITH ADDED INSTRUCTIONS

So once we have the basic outline of the system in place, some extra instructions are necessary in order to give the tactic some Borussia flavour. Regarding Team Instructions, I have chosen:

Shorter Passing  – Due to the propensity for a shorter passing style (well, duh!).
Pass Into Space  – Encourages through balls that will release a faster wide man/forward and start a quick counter; key component of Gladbach’s play.
Play Wider  – This ensures the play is focused in wide areas and to involve the wide midfielders.

As for Player Instructions, they are a little more complex and comprise the following:

– The two Full Backs have been asked to Close Down More  in order to give us the touch-line pressing practiced by the wide men.
– The two Wide Midfielders have been asked to Close Down Much More  to continue this theme, but at a more aggressive level. They have both also been asked to Sit Narrower  in order to mimic Gladbach’s positioning more accurately. Finally, the left-sided player is asked to Cut Inside With Ball  encouraging link up with the forwards and allowing space for an overlap if possible,
– As for the forwards, they are also asked to Close Down Much More  as they are expected to work tirelessly sniffing out opportunities in the final third. I have also asked them to swap position with each other which is something that is often seen with Gladbach.

These instructions should give us the correct pressing structure as the central four (2 CM’s + 2 CD’s) hold off and protect the middle, whilst the flanks and forwards press harder towards the touch-line, limiting the options for the opposition.

Informed by the research, I’ve created what looks to be a pretty fair representation of Borussia Mönchengladbach’s tactical approach in FM. The next step is to run through a few games and see if it is translating in the way in which I hoped. Join me next time as I analyse the first few outings and hone this blunt instrument into a surgical scalpel.